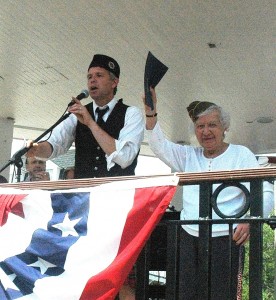 Philipstown paused in its 4th of July Community Day celebrations on Monday to thank one of its own: lifelong resident Sara “Sally” Peparo, a diminutive, gray-haired veteran honored for her service in the Women’s Army Corps in World War II. With few words, but a warm smile and wave, Peparo accepted congratulations from officials and public and expressed her appreciation for the recognition. She served from 1942-45, notably in Papua, New Guinea.

Town Supervisor Richard Shea, Cold Spring Mayor Seth Gallagher, District 1 County Legislator Vincent Tamagna, and Putnam County Executive Paul Eldridge all joined in the brief ceremony at the bandstand, on the Hudson River waterfront in Cold Spring. Eldridge noted that when Peparo first tried to enlist, she failed the physical examination because she did not weigh enough. She protested, he added, and — one way or another — became a WAC. “Our freedom is not free,” Eldridge said. “Sally, you have been a pioneer,” joining the Army at a time when few women could do so. “We want to thank you so very much for all you’ve done and for being a pioneer.”

Before the presentation, the supervisor and mayor officially welcomed the crowd to Community Day, held 24 hours later than planned because of storms on July 3rd. Shea said he had been celebrating the 4th of July in Cold Spring for about 50 years.  Over that time, some things have changed “but one thing that hasn’t changed is we have such great people in this community.” He saluted the efforts of those over the years who worked to safeguard the natural setting and everything that makes Cold Spring and Philipstown special. Citing the “responsibility of protecting that legacy,” he pledged that “we’ll continue to be vigilant.” On the 4th, he also asked Philipstown residents “to remember all the sacrifices made” in the nation by those defending its liberty.

“The weather didn’t work out for us yesterday, but today it couldn’t be better,” said Gallagher, clad in his regalia as leader of the Hudson Highlands Pipe Band. “This is the best village in the United States of America! Happy 4th of July, everybody.”

Judging of children’s bicycles, decorated for the 4th, followed, with a musical tribute to military veterans as well, kicking off an afternoon of music and festivities.