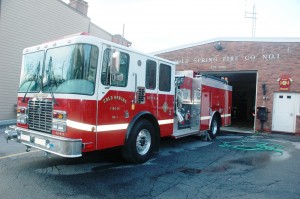 With construction of a new firehouse on the old Butterfield Hospital grounds disappearing as an option, the Cold Spring Village Board on Tuesday (July 5) turned preliminary attention to upgrading or rebuilding the current firehouse on Main Street. In a workshop session, Trustee J. Ralph Falloon reported on a conversation he and Mayor Seth Gallagher held earlier that day with Paul Guillaro,  owner of the former hospital site on Route 9D in Cold Spring. After he purchased the hospital property in 2007, Guillaro offered to give the village a slice of it for a new firehouse.  Last week, the board speculated that as the village wrestles with the firehouse question Guillaro might leave the offer open indefinitely. However, “he’s not sure he can do that, given his obligations to Hudson Valley Hospital Center,” affiliated with the medical offices at the Lahey Pavilion on the hospital grounds, and because of the demands of the planning process, Falloon said. “So it may be fading away, this gift of property for the firehouse. But there’s really not too much we can do right now. There are just so many loose ends. I don’t think we’re really able to make a decision.”
Presently preparing drawings for the development of the hospital property, Guillaro sought a decision from the village regarding the proposed firehouse site — a question complicated by the Grove, the old estate, owned by the village, adjacent to the Lahey Pavilion medical offices parking lot; by Guillaro’s desire to use part of the Grove for parking if a firehouse goes on the Butterfield site; and by the expense of a new firehouse, estimated at $4 million.  [See Village Board — Skeptically — Weighs Idea of New Firehouse at Butterfield Site, Philipstown.info, July 1, 2011.] “I think it’s unfair for us to say we’re going to build a $4 million firehouse, because who’s going to pay for it?” Falloon said. Moreover, within Cold Spring Fire Company Number 1, “a lot of us believe the first place we’d like to see the firehouse is remaining on Main Street.”
Thus on Tuesday night the Village Board began exploring the renovation or replacement of the firehouse at the present location, on the corner of Main and Church Streets.  Falloon proposed they ask a consulting engineer, involved with repairs to the firehouse floor, to conduct a thorough survey of the building’s structural integrity,  with an eye toward efforts  to “build, re-build, or add on” to it. He noted that the idea of a new firehouse has been bruited about for a quarter century, especially in recent years. “There’s a ton of variables we worked on and we could work on — a ton of ideas. It was just a matter of when and why we throw the ideas out for public reaction. “I’m thinking the time is now.”
A few years ago, James Hartford, an architect and village resident donating his time and skills, prepared preliminary plans for an upgraded firehouse on the present site, but his study did not include a comprehensive structural analysis. Hartford attended Tuesday’s meeting and told the board that the existing firehouse might well need to be demolished, not simply updated. “The building is definitely a hindrance,” he said. The many design possibilities for a completely new or substantially revised structure include putting the front on Church Street, he observed. In any case, he added, if the village opts for a new firehouse at Church and Main, it would be easier to construct it in one operation, rather then in phases.
“But it’s going to be a huge hit for the taxpayers. To pay for everything all at once, this comes out of the general fund,” the mayor commented. “So it does mean a tax increase,” even if the village could build a structure for $2 million, instead of $4 million. As an alternative, he proposed Cold Spring “keep the existing building if the engineer says everything is decent and can handle things,” and then consider buying a ladder truck and undertaking a $100,000 building reconfiguration to accommodate it. That might entail loss of a room for public meetings, unless the truck is backed out to allow access to the floor, he acknowledged. Nonetheless, he said, “the main need of the firehouse is to be able to house the trucks and have the guys have their equipment there. I’m just not sure you need to tear the whole thing down and build a whole new one to meet your needs.”
Trustee Airinhos Serradas objected: “It’s still going to cost you $2 million.”
“No, it’s not,” Gallagher countered. “I’m talking about doing $100,000 of work.”
Echoing a comment made by audience member Tom Rolston, Serradas also wondered why the village would not “do it all in one shot,” using bonds — “bonds are extremely low” — to fund firehouse construction. “We can get creative in our financing, find other ways to make money,” he said.
Trustee Bruce Campbell urged the board to “get the [structural] assessment and talk about it then.”
Falloon concurred. “I believe we need to just start getting the facts of what can and can’t be done there.”
Gallagher promised to put the question on the agenda again after enquiries to the engineer about conducting the structural evaluation.

Another money-related issue arose when Rolston, owner of The Depot restaurant, asked whether the board, or anyone, is working on getting Putnam County to return a portion of the sales tax collected in Cold Spring. “This would solve all our problems,” he said. “We produce the income for the county. We’re not getting our share over here” because unlike most other counties, Putnam returns no sales tax money to municipalities. “I’ve certainly brought it up,” Gallagher replied. “Dutchess and Westchester [villages] are getting 19 percent.” He said Putnam could begin by initially returning a small amount, perhaps 1 percent.

In other business, the board: