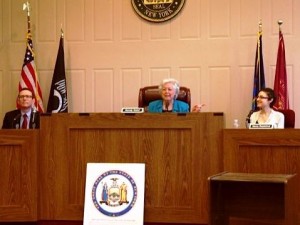 Talks on fraud prevention and disaster preparation draw a crowd

Senior citizens from Putnam and Westchester Counties were warned about identity theft and internet scams and advised how to prepare for disasters as part of a forum organized by Assemblywoman Sandy Galef (D-90th A.D) held at the Cortlandt Town Hall on July 7. Lured by the promise of useful information, free breakfast and musical entertainment over one hundred seniors filled the Town Hall meeting room.  Galef began the meeting with a brief summary of legislative events pointing to the passage of a budget without resort to new taxes, a 2 percent local property tax cap and a new legislative ethics law as major successes of the legislative session.  She praised Gov. Andrew Cuomo for his leadership.  Notably she did not make reference to the new and controversial same-sex marriage law for which Cuomo fought very hard.  Galef voted for the bill. 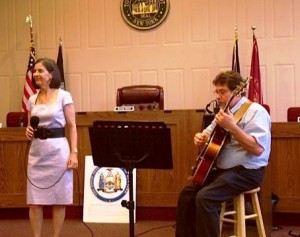 After a musical performance by Putnam Valley jazz singer Michele Leblanc and guitarist Steve LaMattina, along with some poetry by Catherine Wald of Yorktown, Galef introduced a panel of experts to make presentations on fraud protection, emergency preparedness and changes to Medicare.

Gary Brown, an Assistant State Attorney General in charge of the Westchester office, told the audience that identity theft was among the most prevalent crimes against seniors and although not completely avoidable (as when records are stolen at companies) precautions were important to prevent it.  “People often think identity theft is all electronic but paper is fertile ground,” said Brown.  Shredding billing and other financial documents is important, but so is keeping documents you save out of sight according to Brown. “Contactors, caretakers – even people you think are friends might take them and use the information,” said Brown.  Among his other recommendations:

Brown also stressed that scammers need a psychological hook into their victims so they start as nice people but switch to a mode where a decision is required immediately, a definite danger sign.  He reminded his audience notorious scammer Bernard Madoff largely took advantage of people he knew. He cited a recent scam traced to Canada where people were contacted on behalf of friends who supposedly needed money wired immediately due to an emergency.  Brown also mentioned scammers who call in the aftermath of a disaster seeking funds for victims preying upon people’s goodwill.
Brown encouraged his audience to contact the Attorney General’s office or the county Consumer Protection Agency to seek further advice or to report suspected or actual fraudulent activity.  More information about fraud and how to cope with it can be found on the Attorney General’s website: http://www.ag.ny.gov/ . 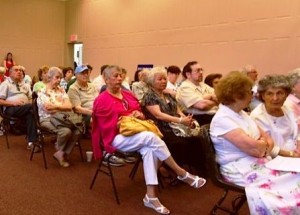 Some of the audience attending the forum

Not surprisingly, disasters were on the mind of the American Red Cross’s chief operations officer in Westchester County, Andrea Grimaldi-Grafer.  She said the Red Cross responds to about 100 disasters a year in Westchester with home fires the most typical, along with events like storms and flooding that require responses when people become homeless or have to abandon their homes. Grimaldi-Grafer advised there were essential steps to preparing for all emergencies or disasters whether they require leaving your home or sheltering in place with no utilities for several days: get a kit, make a plan and be informed.
Grimaldi-Grafer emphasized that disasters can happen at any moment. She said having a kit of basic supplies already packed can make it easier to evacuate on short notice. Planning ahead will allow you to avoid waiting in long lines for critical supplies such as food, water and medicine.  Putting your emergency supplies in a container that has wheels can also be helpful in an emergency.  Water, canned food, medicines, and a flashlight are among a longer list of supplies to have in one easy-to-reach place.  Planning for cold weather without heat for a few days requires thinking about extra clothing and blankets as well as food.
Making a plan involves thinking about what you will do in an emergency and what help you might need from others. Grimaldi-Grafer suggested having a meeting with family, friends, neighbors and/or caregivers to discuss a basic plan.  Arranging for someone to check on you if something happens is a key element of preparation. Carrying family and friends contact information in your wallet and/or on a cell phone is another important part of a plan. Recognizing your abilities and limitations and discussing them with others to try to resolve any apparent problems before they come up in a real situation is also crucial to emergency planning according to Grimaldi-Grafer. Becoming familiar with your community’s plans for a disaster, especially if you don’t have access to transportation, is critical as is knowing the best evacuation route out of your neighborhood.
Grimaldi-Grafer recommended thinking about, and planning for what might happen in your area – the kinds of possible natural and manmade disasters is also helpful. Being familiar with local services such as the volunteer fire company is important as is knowing where you can get up-to-date weather reports and the latest emergency news (whether on television, radio, the internet or by telephone.) If you live in a senior community you should become familiar with any notification systems that might be in place. If you are able think about others near you, who might not be as fortunate, consider how you might be of assistance to them in an emergency.
The Red Cross offers a complete review of disaster preparedness issues and recommendations at its website: http://www.redcross.org/
Later in the morning a presentation was also made on projected changes to the Medicare system.  More information on that presentation can be found at the Medicare Rights website: http://www.medicareinteractive.org/.
Photos by K. Foley