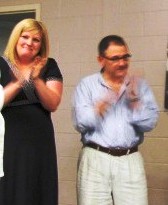 Thorpe to serve as vice president

Veteran Haldane school board member Joe Curto was elected president by his fellow trustees at their July 6 meeting.  Gillian Thorpe was elected vice president. Curto replaces Dave Merandy who had served as president since 2006. Merandy is seeking a seat on the Philipstown Town Board in the fall election, but has said he will stay on as a school board trustee regardless of the outcome. Asked why he wanted to take on the role of president Curto said, “This is my sixth year as a member of the board of education”¦with significant issues facing our district and public education in general this year, I feel a sense of stability, experience and continuity will be important. I’m also excited about working with Superintendent Mark Villanti. I have the utmost respect for him as a leader and as a person. He ‘gets it.'” Curto previously served as school board president in 2005-06 and also as vice president.
Curto said that moving the district forward, while maintaining both short and long-term fiscal prudence, is at the top of his list of priorities. “We also have two contracts being negotiated with our largest bargaining groups. How do we slow the growth of those contracts in an economic environment that’s flat at best? They [teachers and support staff] work hard and do a good job”¦. [but] economic issues are always tough to navigate,” he said. Curto also identified maintaining a balance and common goals for the board as very significant. “Public policy and politics have become so much about winning versus establishing realistic meaningful solutions. Three to two votes win the battle but typically always lose the war in the long term.”
He said that the biggest assets he brings as president are his experience as a school board trustee and the four years he served on the board of the Haldane School Foundation along with his business background. Curto owns an indoor tennis facility in lower Westchester.  He credits his father with helping him become a good listener and a creative, collaborative leader. “My dad taught me a lesson early on in business. [He said] ‘son, every idea potentially can be a great one. Listen to what’s being said and ask well thought-out questions. You’ll always learn something.’ My dad ‘got it’ as well,” Curto said. Curto also had words of praise for Merandy. “He raised his hand years ago and took the helm during a very contentious period at Haldane. Not everyone is willing to do that. He worked hard at bringing balance to the board. Transparency builds community trust, which I believe Dave helped foster. He’s not afraid to question the status quo, which is a good thing when done in a productive manner.”
Gillian Thorpe replaces Mike Junjulas as vice president. “I ran to become involved, not sit on the sidelines. I learned a lot this year and I’m ready to learn more by getting my hands in the mix more,” Thorpe said. “We have some individuals who have served for a number of years, and as they move on to other things we will need new leadership.” She said that she brings several different perspectives to her duties a vice president. “I’m a teacher, librarian, local volunteer, parent, native of Cold Spring and graduate of Haldane. I love this community and want to give back to it as much as possible. I have a desire to make a difference in the place that I love.” Funding and unfunded state mandates top Thorpe’s list of challenges that the board faces, “but there are exciting things happening. Our kids are so involved in the community – near and far.  Technology is making learning exciting and relevant to students and our Destination Imagination, sports, drama and music programs continue to showcase our talented students.”
Merandy said that he is staying on as a trustee to help the board conclude its ongoing contract negotiations. “That’s a big part of it,” he said. “We also really need more time to find people willing to serve on the board so that all our efforts don’t go to waste.” He thinks Haldane will be in good hands with Curto and Thorpe as the district’s leaders. “What they both have is a view of the whole picture. They know that running the school is a balancing act and that there has to be a compromise between providing the best education possible and the cost to taxpayers. They both understand the community – its needs and its limits.”

One thought on “Curto Elected New Haldane Board of Education President”