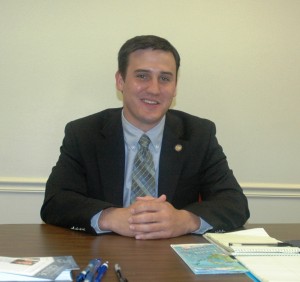 Rep. Nan Hayworth sent her constituent services office on its first field trip to Philipstown last week, drawing a handful of residents seeking aid in dealing with government-related questions. Kevin M. Byrne, a district representative based in Somers, spent a few hours Friday morning (July 8 ) in a conference room at the Cold Spring Village Hall. Those who stopped by brought in “a variety of issues, whether Social Security, immigration, personal taxation,” or queries from veterans about programs, Byrne said, as he wrapped up his visit. A native of Putnam Valley, Byrne said it was his first such on-the-scene constituent outreach in Philipstown. The Republican Congresswoman, a physician, won election in New York’s 19th district last November, joining a wave of newcomers in Washington. “It’s early” in the process of familiarizing the public with the congressional staff’s services, Byrne told Philipstown.info. “We’re going to continue to do this, make ourselves accessible.”
Photo by L.S. Armstrong