The Hudson Valley Shakespeare Festival (HVSF) has tackled much of Shakespeare’s canon, but only now, in its 25th anniversary season, has it essayed Hamlet; arguably his best known play. In his Director’s Notes, Terry O’Brien (who is also the artistic director of the HVSF) discusses the virtues of directing the lesser known of Shakespeare’s oeuvre: “We as a company felt like we were breaking new ground, hearing and telling stories we’d never heard told before, and our audience came to the theatre with a clean slate, and no expectations.” Regarding Hamlet, however, O’Brien writes: ” . . . the opposite is true . . . artists and audience alike, has opinions, expectations and ideas as to what is the right way to do the play.” O’Brien and company have successfully created a clean, straightforward and well-paced production; absent, for the most part from the ornamentations that are earmarks of some HVSF productions.
The dynamic production, led by Matthew Amendt (Hamlet) engages us immediately as the story of an ordinary young man faced with extraordinary circumstances. Amendt’s shaded readings of Hamlet’s famous soliloquies are not ponderous, philosophical disquisitions, but his internal debate about how best to proceed in a situation when he is not in possession of all the facts and the terrain is constantly shifting beneath his feet. Jason O’Connell’s Claudius is appropriately smarmy; a political puppeteer pulling all strings available to secure his own advantage. Whether or not this is a directorial intention, the parallels to the peccadilloes of certain politicians today are clear. Consistent with this approach is Richard Ercole’s portrayal of Polonius. Not the customary old fool, but a political apparatchik, inserting himself into everyone’s business, both his family’s and the royal’s family, on behalf of the king. The culmination of his efforts results in his death by Hamlet’s unknowing hand, while eavesdropping on Hamlet and Gertrude. 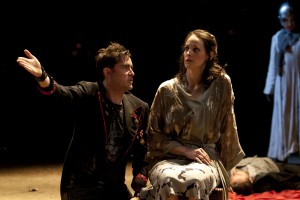 Matthew Amendt and Gabra Zackman as Hamlet and his mother Gertrude

The two ladies in the play, Ophelia and Gertrude, fare less well in this production. Valeri Mudek has the unenviable task of bringing Ophelia to life. One of Shakespeare’s more two-dimensional characters, she does, however, act as a touchstone for both her brother, Laertes, and Hamlet. Unfortunately, as in many productions, the character of Ophelia, remains a puzzling presence. Gabra Zackman bestrode the stage as a colossus in last year’s production of The Taming of the Shrew, where she played the untamable Kate. As Hamlet’s mother, Gertrude, she is quiet and ever-yielding to Claudius. The choice of portraying Gertrude as clueless (until her confrontation with Hamlet in the latter portion of the play) to events and actions surrounding her is at odds with the other major characters.
A consistent virtue of HVSF productions is not only the clarity of the words spoken, but also, through the direction and acting, the clarity of intent, as if the play were written in contemporary English and so immediately comprehensible without a mental translation from Shakespearean English. Hamlet is no exception and the first half moves like a thriller, a real page-turner, as plot and character are revealed. As director O’Brien has noted, everyone has opinions about Hamlet and this reviewer is no exception. Seeing this production, however, was like seeing it for the first time, which is perhaps the ultimate accolade for a production of any play. The audience was abuzz during the intermission. The second half, however, loses the energy and momentum of the first. This is in some part due to the plot exposition, necessary to set up the action for Hamlet’s return. It may also be in part due to the absence of Amendt’s Hamlet, who is the play’s Energizer Bunny. Even upon Hamlet’s return, though, the play’s energy dwindles as the action moves to its resolution. Fortinbras does not so much sum up the tragic action of the play as report it as a news story. The absence of closure explains, perhaps, the cinematic montage appended to the play. Outside the tent, appear the ghosts of those slain. The dead characters lying on the ground, covered in red shrouds, arise and walk toward their ghosts and, as the lights fade, disappear into the mist. It is a lovely image, but this reviewer wishes the effect could have been accomplished within the bounds of the play.
Photo by William Marsh