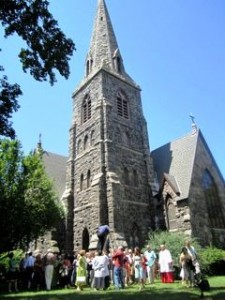 The beauty of the steeple once again crowns Main Street (photo by A. Rooney)

Steeple at the Episcopal Church of St. Mary in the Highlands rededicated

The steeple at the Episcopal Church of St. Mary in the Highlands, surely the most prominent man-made landmark in this town, was rededicated this past Sunday, July 10, 2011. A ribbon-cutting ceremony presided over by the Rector, Father Shane Scott-Hamblen, followed an interfaith service with the Philipstown Reform Synagogue (PRS), reflective of St. Mary’s policy of inclusion.  PRS Rabbi Michael Rothbaum, whose congregation has been “given a home” by St. Mary’s, participated in both the morning service and the celebration of the now-restored-to-glory steeple, which culminated in a ringing of the 1,100-pound steeple bell, its tone resounding through the village. 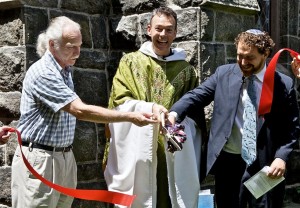 Built in 1868, the church effectively crowns Main Street, joining it with Chestnut Street. The steeple, covered in scaffolding and netting for several months, was in danger of destruction, ravaged by climactic extremes caused by constant freezing, and thawing, as well as summer heat.  Suffering from  substantial water damage, the entire structure needed to be re-pointed, and the sacristy, located at the base of the tower, still needs a complete renovation.  According to Steeple Restoration Chairperson Mary Jane Butler, funding for this major capital project was realized through grants from the Episcopal Diocese of New York, New York Landmark Conservancy, State of New York, and many private donations.  Benefit concerts and other community fundraisers aided in supporting the project.

“Preserving the steeple of this stunning Gothic church is the legacy our generation will leave for many others to enjoy,” said Butler. “The donations from the parish, the Cold Spring community and our grant awards have allowed this project to be completed without the church incurring any debt. We are very proud of this achievement and thankful to all who helped make it a reality.” Work was done by Henry Restoration Ltd., from Long island, and the engineer was Anthony Guidice. 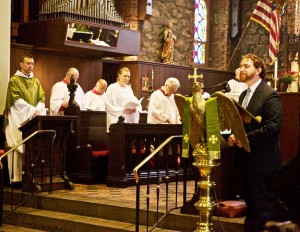 The interfaith service which preceded the steeple dedication was the second unifying St. Mary’s and the formerly “without a home” PRS, which finally found that home at St. Mary’s Parish Hall in 2005.  PRS services take place once a month on the Jewish Sabbath, and the Torah is kept at St. Mary’s.  As noted in a brief Philipstown.info story prior to the event, “according to the church, the opportunity to welcome the Jewish community of Philipstown was a natural outgrowth of St. Mary’s policy of inclusion for all seeking to worship. When PRS found itself in need of a meeting place, St. Mary’s Parish Hall was the logical choice. “From our very first gathering,” said Diane Botnick, president of PRS, “it was clear that we had found a home. It is very generous of St. Mary’s to share their lovely space with us, but the hospitality they have extended to us goes far deeper.  We hope this spirit of partnership will serve as an example for others.” In addition to sharing the parish facilities, members of PRS attend some of the parties, fundraisers, parish picnics, and other activities during the year.

Sunday’s program began before the service, with a presentation by “Rabbi Mike,” as he is known, to interested members of both congregations, on the Torah and the Hebrew Bible. In his opening remarks, Father Shane welcomed everybody and Rabbi Mike reciprocated. “Even the bishop didn’t know to make of this service, but he sends his warmest greetings,” Father Shane announced. “It is a blessing to be in this beautiful building and to share space with Father Shane” at the service, Rabbi Mike said in turn. “It is truly humbling.” Evoking the story of Jacob and Esau, whom he described as “brothers not so inclined to peace,” Rabbi Mike drew upon thoughts of support groups, underdogs and Mets fans in his sermon. “Let Jacob and Esau’s honest discussion remind us to plant seeds of righteousness.  In doing so, perhaps a time of universal brotherhood can lead to a time of universal peace,” he concluded. 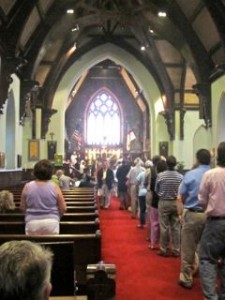 Members of both congregations line up to receive Communion or a blessing (photo by A. Rooney)

Amidst a back-and-forth service entitled “Co-exist” and consisting of Purcell’s Trumpet Air, alternating hymns, acclamations, Morning Blessings, the Liturgy of the Word, the Torah, Psalms, the Intercessions, the Absolution, the Sursum Corda, the Lord’s Prayer, Agnus Dei, and the Benediction, Father Shane did concede that he “tried to be ecumenical in this interfaith service, but it’s hard to leave Jesus out of the Holy Eucharist!” At the point in the service where the St. Mary’s congregation normally receives Holy Communion, all of those in attendance were included, with Christians invited to come forward as usual, and all others present invited up, with arms crossed, to receive “a blessing.” In the words of Father Shane: “We would like to be as inclusive as possible.”  Most present in the church lined up and received Communion or the blessing accordingly.

At the conclusion of the service, everyone was invited outside on the beautiful, warm summer’s day, where, with Cold Spring Mayor Seth Gallagher in attendance, Father Shane asked Rabbi Mike “to bless our steeple,” chuckling that in doing so ““we get all the bases covered” Rabbi Mike asked for “God’s blessing on all who have worked to make this happen.”  The bell pealed loudly at the instant the ribbon was cut, and both congregations gathered together for a group photo.

4 thoughts on “Interfaith Service Heralds Rededication of the Steeple at St. Mary's”