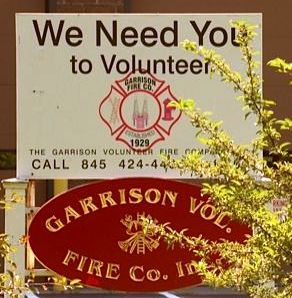 At the heart of any discussion about Philipstown’s fire and emergency preparedness lies the concept of volunteering.  When a citizen dials 9-1-1, a dispatcher sitting in the Putnam County Bureau of Emergency Services in Carmel transmits an alert to volunteer members of fire companies and/or the ambulance corps who are asked to respond to the alert via a text message. The volunteers live and work in the community.  When their beepers go off the request is to drop whatever they are doing and report to the firehouse or, if they are closer, to the scene of the incident. The primary issue in a system reliant on volunteers is that on any given day (or the middle of the night on Christmas Eve) no one is paid to be on duty or even required to respond when someone calls for help.  Accordingly, the search is always on for people willing to serve, to take the training, to answer the calls, while the rest of us go about our business.
When Philipstown held its annual clean-up day last May 9, residents of Garrison who participated were asked by their Garrison firehouse hosts if they ever thought of joining the volunteer fire company. “We have realized people liked to be asked, so we’ve become a little bolder about asking people if they’d like to serve. Most people respond well,” said Garrison Fire Company President Jamie Copeland, a volunteer for 11 years. Copeland said the company’s stepped up, more personal, recruitment effort has led to an uptick in membership, currently at 40 members with 25 certified for interior firefighting. “In the last six months we’ve had five new members.  Some people tell us they are a little intimidated by the idea of going into a burning building.  So we talk about the things you can do that don’t involve that kind of risk.”  Driving trucks, preparing meals, manning the radio, maintaining equipment, directing traffic are among the duties to which Copeland referred.  “Every Sunday morning there is a gear clean up,” Copeland added.
Peter von Bergen, company secretary and 35-year veteran, specifically mentioned the role of fire police volunteers who receive training in traffic control, which is needed at various incidents such as car accidents as well as at fires. “Garrison has no police.  Scenes need to be protected,” said von Bergen. 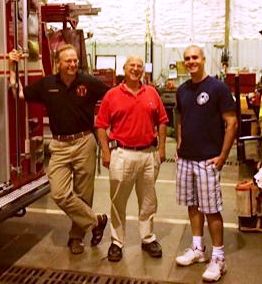 Recruitment was top of mind during an interview at the Route 9 Garrison firehouse on Saturday, July 2,  with some of the company’s administrative leadership.  The ranks of the company (like others in the town, county, state and around the country) are always in need of replenishment as people drop out for various reasons.  “The truth is none of us like to think about emergencies. What we like about this area is that not a lot happens here, it’s a very safe community,” said Copeland.  Compounding the difficulty of recruitment is the changing population of the town.  “With the great influx of people from New York City (which has a career professional department) it’s human nature that you just expect services to be provided. You come here you pay your taxes, you expect things to be done,” said the company treasurer, John Svirsky.
Copeland, a local architect, explained the experience that led him to the firehouse door in 2000. “One night I was headed home with a video to watch with my family and I stopped to get pizza at Papa John’s and I drove into the parking lot and I realized the entire Garrison Fire Company was bivouacked in the parking lot. They had been fighting a brush fire up on the ridge above all our homes for the last couple of days. And I looked at the men and women who were there and I saw Dean who plays tennis at the club and John who writes mortgages for some of my clients and other individuals who I recognized. These are people who live and work here. They were providing a service.  I don’t think any of my neighbors understood the importance of their being up there fighting this fire that was threatening the community.  I felt a little embarrassed. I realized here I was going home to watch a movie with my family. I live here, I work here, I should be involved, I should join,” said Copeland.
“We are just members of this community. When people walk into FoodTown and see a guy with a pager on his belt, he’s just another guy. We’re not specialists, we weren’t born into the fire service, we’re attorneys, MBAs, software developers, carpenters, financial people, we are a subset of the community of Garrison, just ordinary people who have found we get a lot of inner satisfaction serving the community.  We’d like other people in Garrison to know that they can have that too—there’s no need to be a specialist, there are no great barriers to entry,” said member and newly appointed public information officer, Michael Del Monte. Del Monte and the others stressed that membership has advantages.  Aside from free training, protective clothing and equipment, members have use of the large firehouse meeting rooms and the exercise room (most equipment donated). They also emphasized the potential for new friendships, family interactions as well as the respect of the public. 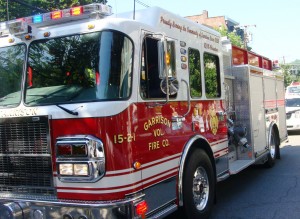 Increased public and media scrutiny is a new challenge for all Philipstown fire companies. An interview with a reporter from a year-old news website and a recent and still lingering controversy over the Philipstown Town Board’s hiring of a consultant to evaluate the companies are two examples of the changing landscape.  “Our entire focus up until recently was on serving the community, fighting fires, handling traffic and so on and now we find we need to pay more attention to answering questions about what we do and speaking to the public and reporters,” said Copeland. Despite the aggravation or because of it the Garrison officers displayed an eagerness to confront the challenge head on. “We have changed our policy—from now on he’s the man you talk to,” said John Svirsky, pointing to Del Monte, the company’s new public information officer.  “We’re many faces with many opinions.
We want to speak with one voice,” added Svirsky.  “My role is to be transparent, direct and consistent,” said Del Monte. Emphasizing history and tradition Del Monte referenced Ben Franklin as the originator of the concept of a volunteer company training together and preparing to respond to fire alarms. “Speaking broadly about the country, we are an extremely cost-effective solution, we are not a government solution,” he said. As a private nonprofit organization, the Garrison Fire Company contracts (currently on an annual basis) with the Philipstown Town Board to provide fire fighting and emergency services for Garrison under what is called a fire protection district agreement.  The agreement is subject to a public hearing before it’s final. During the interview the Garrison officers willingly offered independently audited financial records and were eager to dispel misconceptions the public may have about the cost of operations.
The finances of the Philipstown fire companies as well as the issues of training and mutual aid will be the subjects of future articles.
Photos by K. Foley