The German film company, Network Movie, set up on Cold Spring’s Main Street Tuesday (July 12) to shoot scenes for the first in a series of three, 90-minute, German-language, made-for-television movies based on the work of the British romance novelist Katie Forde.  The production, in conjunction with Van Wormer International, a Florida based company, has been working in various locations in the Hudson Valley since late May.   According to the Hudson Valley Film Commission, a non-profit group based in Ulster County that works to attract movie and television production to the region, this is the third year the company has filmed in the area, although a first for Philipstown.  Cold Spring Village Clerk, Mary Saari, said the company indicated an interest in returning to Cold Spring on July 19 but has not yet confirmed the date. 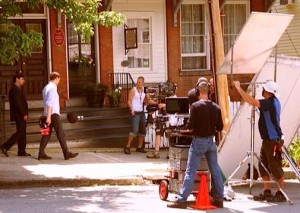 The film, which used the Foundry Cafí©, Hudson Valley Outfitters and Cold Spring Apothecary as background, is entitled Diagnosis Love.  In a letter to the village, the location manager, Kat Delany, described the series as “G-rated” and “marketed for parents to watch with their children.”  The company also used the parking lot of Our Lady of Loretto Catholic Church as a staging area.  Typically the village receives $5,000 for a full day of shooting and $3,000 for a half day. Businesses and other institutions also receive compensation depending on their dealings with the production company.
Photos by K. Foley