Most think the new school year begins around Labor Day, but local school boards begin in early July. The Garrison Union Free School (GUFS) began the 2011-12 school year on July 13 with a reorganizational meeting. As the name implies, the purpose of the meeting is to organize the board and the district for the coming school year. A pro forma affair, the reorganizational meeting is required for district operation. The first order of business is swearing in new or reelected board members and district personnel. Long-time Trustees Diana Swinburne and James Cannon were reelected to the school board last May. Swinburne was sworn in by Superintendent Gloria Colucci, but Cannon (who was absent) will be sworn at a later date. Colucci then swore in business agent Susan Huetter and herself. 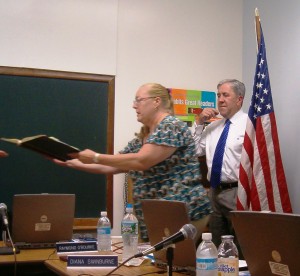 Trustee Diana Swinburn is sworn in, as vice-president O'Rourke looks on

Nominations of board officers followed. Past president Carol McCullough and vice-president Raymond O’Rourke were both re-nominated, reelected and sworn in. The balance of the meeting was spent approving annual district appointments for: clerk, treasurer, tax collector, claims auditor, school physician, school attorney and other similar positions. After the reorganizational meeting was closed, the board immediately convened its regular meeting, which was dominated by various personnel appointments and contracts; all of which were approved by the board with little or no comment.
The next GUFS board of education meeting will be held on Aug. 24 at 7:30 p.m. Thereafter, board meetings will be held on the first and third Wednesday of the month.
Photos by M. Mell