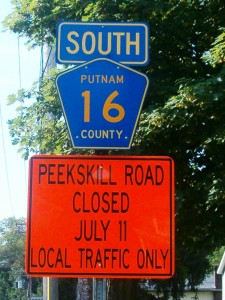 The warning signs were there, literally. Orange, diamond-shaped signs saying the road would be closed to through traffic on July 11. Detours were posted on Routes 9, 301, and 9D. On the designated day, large barricades appeared on either end of Peekskill Road and the much used short cut was closed off. 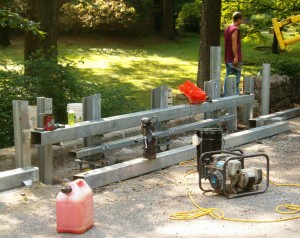 The reason? New steel guardrails are being installed on the bridge at Bank St., near the Cold Spring Cemetery. Part of a county-wide program, old guardrails are also being replaced on Route 9D and other roads in the county. The new railings appear to be studier and often extend beyond the limits of the older railings. Workers said the guardrails on Peekskill Road would be completed in another week and a half.
Photos by M. Mell

One thought on “Peekskill Road Closed”