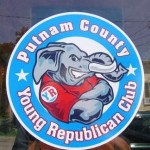 Putnam County Young Republicans Club (PCYRC) officially opened its Main Street office in Cold Spring on July 16. The Saturday afternoon event was attended by a who’s who of Putnam County Republican politics. The honor of cutting the ribbon to mark the occasion went to Katie Giachinta-DeMarco, the only PCYRC member running for public office in this fall’s election. The 29 year-old Nelsonville resident is seeking a seat on the Philipstown Town Board. 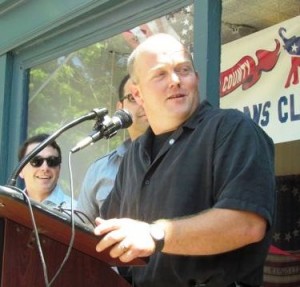 PCYRC president John Greene said that in part, opening the Main Street office was a result of the Putnam County group’s desire “to do something different than other chapters in New York State.” It seems they have accomplished that goal. Greene, who also serves as a member of the Town of Kent town board, said that no other Young Republicans Club in New York state has opened a campaign office. “We plan to be active in most of the races in Putnam County,” he said. In his remarks at the podium Greene said that the new office has been well received in Cold Spring. “It kind of feels like home now,” he said. Greene said that while there have been a few negative comments from passersby, a number of local business owners have extended a welcome, including Cold Spring Mayor Seth Gallagher – a Democrat. 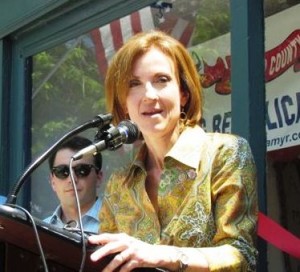 U.S. Congresswoman Nan Hayworth picked up on that theme when she addressed the crowd of about 30 supporters. “It’s not surprising that this office is being welcomed here. It represents freedom, opportunity and jobs. Putnam County is the reddest, most Republican county in the state,” she said. Speaking with Philipstown.info prior to the ceremony Hayworth said, “It’s so important that young people get involved in the political process. As a Republican I’m very excited to see this organization set up in Cold Spring. It’s a very good thing for Putnam County.” 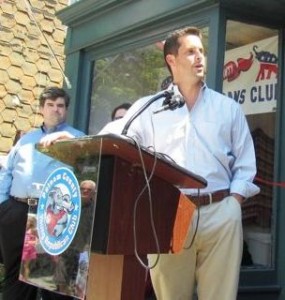 New York State Senator Greg Ball left little doubt as to what he sees as the value of the new office. “It’s a great day. I see a lot of new faces here “¦at the grass roots level. That’s where elections are won and lost. You’ve got to go to their strength and that’s what you’re doing – right here in their holy land.”
When asked by Philipstown.info why she was running for office Giachinta-DeMarco said, “I’m fifth generation here. I recently started my own family here. It’s time for new leadership and I have the desire and energy to do so.” 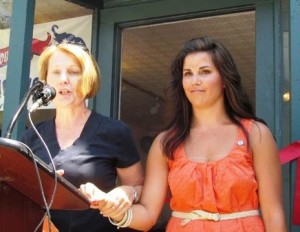 The Philipstown election will see incumbent supervisor Richard Shea challenged by Republican candidate Lee Erickson. The race for two seats on the town board will feature a four-way battle involving two incumbents – Democrat Nancy Montgomery and Republican Barbara Scuccimarra along with challengers Giachinta-Demarco and Dave Merandy, a Democrat and former president of the Haldane Board of Education.
The PCYRC office is located at 135 Main Street in Cold Spring, in a building owned by local residents Carl Hansen and his daughter Lillian Moser. In exchange for having refurbished the space PCYRC will receive free rent until the end of the year. PCYRC members must be between the ages of 18 and 40. There are currently about a dozen members.
Photos by M. Turton