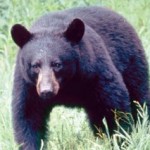 Bear sightings have also been reported in Garrison recently

On Friday, July 22 a lone hiker encountered a black bear on the trail leading from Little Stony Point Park to the Cornish ruins. The hiker, who did not give his name, spoke with Lynn Miller at Go Go Pops on Main Street in Cold Spring shortly after the incident. “That was the really hot day. He told me he started out early and had gone all the way up the trail,” Miller said. “On the way down he said he saw and heard a number of deer. He heard what he thought was another deer, but a black bear walked out in front of him – no more than ten feet away. He said he worried the bear would rear up but it didn’t – it just moved on,” she said. The incident took place near the bottom of the trail, close to Route 9D. “He was pretty shaken up,” Miller said. She described the hiker as in his late 30s or early 40s, quite fit and apparently an experienced hiker. He told Miller that he usually carries a whistle with him, but that he had not on this occasion. The hiker also spoke with Amber McCoy-Snapp and Mary Ietaka who work at Hudson Valley Outfitters. “He looked pretty frazzled,” McCoy-Snapp said. Iataka said that the hiker indicated that he was okay and that he simply wanted people to be aware of the incident.
The website Pro Trails offers this information and advice:

“The American Black Bear or ursus americanus is the most common bear found in the United States. Despite the name, the Black Bear comes in a variety of colors including cinnamon brown, pale white and even a bluish hue. Although the Black Bear possesses color vision, their eyesight is very poor so they rely upon their keen, directional sense of smell to navigate the wilderness and forage for food. The diet of a Black Bear consists mainly of berries, nuts, grasses, insects and occasionally small mammals. While the bears are generally vegetarians, they have been known to feed on animal carcasses and will eat virtually anything especially right before hibernation when they need to put on their winter weight
Black Bears are graceful, powerful and can outrun any human. They can reach land speeds of over 35 mph and are made to climb trees. They are also excellent swimmers. If approached by a Black Bear, DO NOT RUN. Running will kick in the bear’s defense instinct and there is no escape from a black bear chase. Instead, stand your ground and remain calm. Speak in a mellow voice and back away slowly. Try to avoid prolonged eye contact and give the bear its space. If the bear stands up on his hind legs, this is not an attack signal. He or she is simply trying to get a better “smell” of you to satisfy its own curiosity. If the bear charges, smacks his jaw or stomps his paw on the ground, that means he feels threatened and it is time for you to back away. If you are attacked by a Black Bear, do not play dead. Fight back by kicking, punching or hitting the bear with a rock”¦“

Other sites offer additional advice. One tip that makes a lot of common sense is not to hike alone. The larger the number of hikers, the less likely that a bear will be aggressive. Another simple measure is to carry a good, sturdy walking stick and a whistle.

3 thoughts on “Bear Sighting on Trail Near Cold Spring”