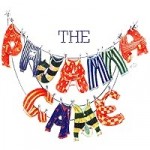 Do you remember a time when a 7 1/2 cent raise was a huge deal? The 25 teens acting, singing, and dancing in the Depot Theater’s production of The Pajama Game, directed and choreographed by Katie Bissinger, do. Opening on Thursday, July 28, at 7 p.m., this show is a classic example of musical theater. With hit songs like Steam Heat, I’m Not At All In Love, There Once Was A Man, Hernando’s Hideaway, Racing With The Clock, and Seven-and-a-half Cents, how could it not be? With a book by George Abbott and Richard Bissell, and music and lyrics by Richard Adler and Jerry Ross, The Pajama Game has been a favorite since its Broadway opening in the fifties.
The story is based on a book by Richard Bissell entitled 7 1/2 Cents. Set in 1954, everything revolves around the Sleep Tite pajama factory, a workplace so full of tension something interesting is bound to happen. The union and the management are locked in a battle over a 7 1/2 cent raise. The big boss, Mr. Hasler (played by Conor Austin), insists that the factory simply does not have the money for the raise, but he won’t let anyone see the books. He’s a hard man to work with, as evidenced by the fact that he can’t seem to keep a superintendent. He’s just hired a new one, by the name of Sid Sorokin (Matt Marino).
Meanwhile, there’s a whole different kind of tension building between Sid and the head of the grievance committee, Babe Williams (Tess Dul). Love seems to cause lots of tension in the Sleep Tite Pajama factory. There’s the stressed relationship between Hasler’s secretary, Gladys (Harper Levy), and his easily jealous time study man, Hines (Tyler Mell), and then there’s the commotion caused by the president of the union, Prez (Callum Lane), and his womanizing ways. Mix up all the professional and personal tension, and the Sleep Tite pajama factory becomes a powder keg, just waiting to blow. 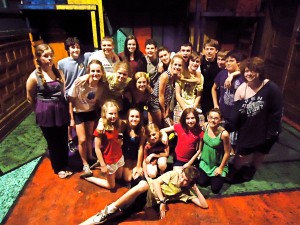 Cast of "The Pajama Game"

Director Katie Bissinger said she chose Pajama Game as this summer’s production “mainly because I think it is an underappreciated musical theatre gem. The score is so much fun and I knew that the teens would especially enjoy dancing to Steam Heat and Hernando’s Hideaway. There are also some very challenging songs in this one, but I went in knowing I had incredibly strong singers and they are really rising to the challenge. I have particularly enjoyed watching these actors surprise me with abilities that I didn’t know they had! My Steam Heat dancers are doing a lot of Bob Fosse’s original choreography, which is completely amazing and I am so very pleased with how well the actors are dealing with the comedy of this musical. It is hard to pull off but they make me laugh every rehearsal.”
Bissinger, a former Radio City Rockette, has been the head teacher at Hudson Valley Dance Studio for the past six years, instructing many local children and teen-agers in ballet, jazz, tap and hip-hop. She was the choreographer for this past spring’s Haldane High School production of Grease, working with some of the students who are appearing in Pajama Game. This fall Bissinger will be starting up the dance program at Studio B at the Beacon Theatre; the program there will have a strong musical theatre focus. Bissinger plans to choreograph many musicals at the newly renovated theatre as soon as the stage is ready to be danced upon. More info at www.thebeacontheatre.org or www.4thwallproductions.net.
Other Pajama Game cast members include Lucy Austin, Bernadette Barrett, Frank Batignani, Simon Close, Amanda Erickson, Elizabeth Groombridge, Ramsey Heitmann, Matthew Koval, Natalie Lansbury, Jocelyn Lane, Allie LaRocco, Jack Lovell, Marina Martin, Sophia Ptacek, Jack Revkin, Elizabeth Richter, Peter Spratt, Jack Revkin, and Lily Weisberg.
Creative credits include:  costume design: Charlotte Palmer-Lane; lighting design: Donald Kimmel; music director: Paul Heckert; producer: Jenn Lee; set design/painting: Dana Kenn; set painting: Lucinda Strohl, Wylie Thornquist; stage manager: Anna Ledwith, assisted by Riley Bissinger; vocal coach: Linda Speziale.
The Pajama Game opens this Thursday, July 28 at 7 p.m. with additional performances Friday and Saturday at 7 p.m. and a final performance Sunday July 31 at 2 p.m. Tickets are $12 each and may be ordered at http://www.brownpapertickets.com/.
Photo courtesy of Philipstown Depot Theatre

Elizabeth Groombridge will be entering her senior year at The Masters School in September.  As the cast list shows, she performs in this production.