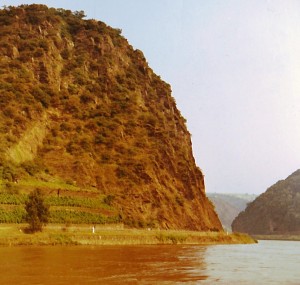 View from the Rhine

An uncanny resemblance thousands of miles to the east

There are those who believe that each of us has a twin walking this earth somewhere. I saw mine once. It was scary. But does the same theory hold true of places? Does every locale have a mirror image somewhere on our fair planet? Cold Spring resident Joe McCollum thinks that may be true.
McCollum, originally from Yonkers, has lived in Cold Spring for 27 years. From 1967 through 1969 he was stationed in Germany with the US Army’s 81st Field Artillery Regiment before shipping out to Vietnam. He admits that Germany was more fun than Vietnam. German beer accounted for at least part of that fun. “I had a lot of beer while sitting along the Rhine River. I weighed 167 pounds when I got there and 221 pounds when I left!” he recently told Philipstown.info. “I had family there, aunts and uncles and cousins  – and I spoke German.”  One Christmas he commandeered a jeep and made the rounds, visiting several relatives. “When I got back the jeep was just full of German sausage and beer. We had a heck of a party.” McCollum said he had to come up with a very creative story to justify the 300 miles he put on the jeep when it came time to record his exploits in the jeep’s logbook.
Recently, McCollum was going through a box of German memorabilia when he came across two faded photographs that made him pause and take a second look. Then a third. At first he swore he was looking at pictures of Storm King Mountain and Breakneck Ridge just north of Cold Spring. “They were pictures I took along the Rhine River. The one mountain looks exactly like Storm King – and the one that reminds me of Breakneck even has a railway tunnel” he said.
Here are McCollum’s two photos. Below them are shots of Storm King and Breakneck Ridge. You be the judge. Conspiracy theorists will no doubt point to the existence of The Chalet, a German restaurant right at the base of Breakneck Ridge. 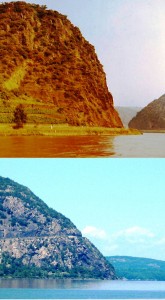