HVSF Presents The Comedy of Errors

One of Shakespeare’s early plays, The Comedy of Errors, is usually considered a “lesser” work. Based upon Roman comedy, it relies upon a single joke: two sets of identical twins, with identical names and the complications that ensue when they are unknowingly brought together. Director Kurt Rhoads, in his program notes acknowledges this, saying that “It may not be the deepest [play] . . .”  Indeed, even Shakespeare’s tragedies are laced with comic moments that offset the more serious action and often illuminate the characters. Here there is no dramatic action nor conflicted characters striving to resolve a crisis they find themselves in. Lacking these aspects, the primary task for Rhoads and his cast is to maintain the audience’s interest and pleasure, though the conceit of the play is known from the start. They successfully accomplish this by a “focus on the errors” and allowing the comedy to flow naturally from the action and the characters reactions. 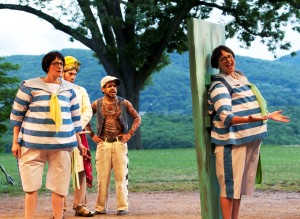 The production is conceived as a circus or carnival, sort of Cirque du Soleil meets the Big Apple Circus, but without the extreme acrobatics. The two Dromios are clowns, identically dressed, coiffed and deliciously played by Gabra Zackman and Nance Williamson, who mimic each other so perfectly that they are often difficult to tell apart. Another clown is Doctor Pinch, played by Stephen Paul Johnson, channeling, to this reviewer’s mind, the ghost of Milton Berle, complete with goo-goo eyeballs, wild hair and pancake make-up liberally applied to any and all within reach. The Duke, as the master of ceremonies, is played by Christian Adam Jacobs as a soul-singing magician in a tight, leopard-skin suit. Exotica is provided by Valeri Mudek as Luciana, as a mermaid who must constantly sponge herself with water from a container attached to her wheelchair – did I mention that she is in a wheelchair throughout? And what would a carnival be without a bearded lady? Adriana (the wife of Antipholus of Ephesus) played by Katie Hartke, is not the slovenly type usually on show, but a slim Wonder Woman, complete with bustier and boots. Lucky Gretzinger and Michael Borrelli play Antipholus as the straight-man (straight-men?) wandering, evermore clue-less at to what is going on until, of course, the end.
Photo by William Marsh