Alexi Katsetos never had dreams of opening up an ice cream store, but once upon a time his parents did. Back in the mid-90s, living in Poughkeepsie, as a fallback plan to the unrelated businesses they were in, his mom, in particular, had such a store in mind. It was always something she wanted to do. She had a friend in the food industry, whom she learned a lot from, but the business didn’t happen (she now does custom drapery treatments). Katsetos, in an all-too-common scenario these days, found himself unemployed post-college, and the notion of starting up a business returned.

Remembering the notes and research from 17 or 18 years ago, he poured through them, started conducting research on his own, including scoping out the latest in “American flavor profiles” on Food Network. In November or December of last year it all became more realistic and he decided to take the ice cream plunge; thus Moo Moos was born. The name came out of brainstorming sessions, satisfying the requirements of something both easy to say, inspiring for a logo and tied in with a theme, all related to the product. 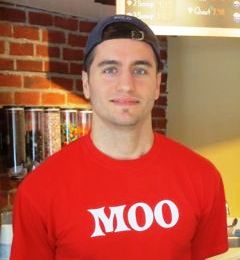 In searching for a location, Katsetos had a far-reaching, two hours in any direction range.  He might not have considered Cold Spring, for despite growing up nearby, (he attended Ketcham High in Wappingers) he had only driven through on Route 9, and had never visited the waterfront area until just last summer, when he was amazed at the beauty and liveliness by the river. Therefore when he heard of the availability of a storefront right by the bandstand, he immediately checked it out.

He wasn’t fazed by the abundance of other ice cream and frozen confection places already open in Cold Spring (those include the Village Scoop, Go-Go Pops, Frozenberry, Cup-O-Cino and Cold Spring Pizza), saying, “You’re always worried when there are so many variables to the equation, but from day one I believed in my product and in creating an atmosphere that people will want to come back to.”

A couple of months of submitting specs to the Cold Spring Planning Board and Historic District Review Board followed, and opening day was July 1, 2011. Katsetos said he “couldn’t have opened a day earlier, and of course it was crucial to open for that weekend. Our countertops arrived Thursday night, and we opened on Friday!”

Hot and largely dry, July proved to be the perfect opening month for an ice cream store. The crowds began with the Community Day holiday weekend, and business has been very good since, with the peak times of day being “around 3 p.m. ” really from 2:30 to 4:30, and then again at about 6:30.  We have a few stragglers around dinnertime, and also a few who choose to make ice cream their dinner!” says Katsetos.

Asked if blisteringly hot days deter people from visiting, Katsetos said no, it just shifts them to the evening hours, when it has still be 85 degrees out. Regardless of the posted hours, he stays open as long as there are customers. Customers have been a mix of tourists and locals, with more tourists, many from the City, on the weekends. The international set has also discovered Moo Moos, with visitors from London and also the German television crew in town recently shooting a series.  Katsetos sees his job as not just the maker of ice cream, but as an atmosphere creator as well, “The people that come in here are the nicest.  My job is to make them smile.  If they’re not smiling, I’m not doing my job right.” 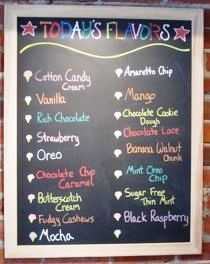 To help make them smile, there is always a selection of 16 to 18 different flavors, one of which is sugar-free. Many of the flavors change daily, except for the sugar-free, which changes every week or two. Katsetos hopes to add gelatos and sorbets very soon, and frozen yogurt by next year. He also stocks soft drinks, water and bags of chips.

His flavors are mixed by hand, in the back of the store, and will include season specialties such as pumpkin, spiced apple and cinnamon in the fall, with peppermint planned for the December holidays and ice cream cakes by the New Year. Katsetos isn’t certain yet what the winter schedule will be; it may be week-ends only for a stretch, and during those months his focus will turn to the wholesale aspect of his business, with sales to restaurants and caterers.

Katsetos is living the long hours of a new business owner.  Aside from the hours the store is open, he’s spending time before and after making the ice cream which fills those 16 to 18 tubs. All of the mixes are done by hand. Then there’s the cleaning of the machines between batches, “If I could just make vanilla all day, it would be very easy,” says Katsetos ruefully. But it wouldn’t be Moo Moos, where popular flavors include “mint fudge Oreo swirl, and anything including cake batter – I didn’t anticipate the demand for cake batter,” according to Katsetos.

Customer suggestions are always gratefully accepted, and results have included strawberry cheesecake, light chocolate cookie dough and fudge peanut butter banana, most of these stemming from requests along the lines of “Why don’t you add this to this?”

Katsetos’ days vary, with no two the same. In fact, just last week, on the day Philipstown.info visited, he finally took his first few hours off, in the afternoon, to celebrate his birthday.  Helping him out are his girlfriend and his brother, Stavros, who is a lawyer doing contract work, and therefore able to pitch in when Alexi needs a break. With all of these Greek names, Philipstown.info was wondering if there was a Greek ice cream tradition. “Not really,” said Katsetos, “but I did make a crushed Baklava topping last week and put it with hot fudge and whipped cream. It hasn’t caught on yet, but it’s to die for.”

Moo Moo’s is located at 32 West Street, right next to Hudson House at the waterfront, near the bandstand. Visa and Mastercard are accepted and gift certificates are offered.  The ice cream is also available in pints and quarts to take home. Visit where the day’s flavors are posted daily.  Phone is 845-204-9230 or visit moomooscreamery.com.