The beat goes on

Jazz Vespers in Concert returns to Philipstown.info on Saturday, Aug. 13 at 5:30 p.m. The program highlights the music and musicians of First Presbyterian Church of Philipstown Jazz Vespers. Musicians for the concert include: Tom McCoy: a pianist, composer, arranger, music educator has been the bandleader for the Jazz Vespers at the First Presbyterian Church of Philipstown since its inception in 1999. He has backed up Ray Charles, James Taylor, Natalie Merchant, Judy Collins, Robert Goulet, Garth Hudson, Kate Pierson and many others. His work has been heard on national television. His original musical The Battle of the Orphans was mounted locally at the Depot Theater. 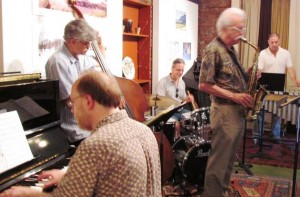 Rob Scheps, saxophone, began playing at age nine and went on to receive a Bachelor of Music in Jazz Studies with honors in performance from New England Conservatory in 1986. While living in the Boston area he led his own groups, most notably the True Colors Big Band. When he moved to New York two years later, he formed the Rob Scheps Core-tet. A faculty member of Mannes College of Music, Mr. Scheps has participated in workshops at colleges and universities throughout the country.

Philipstown.info is located at 69 Main St. in Cold Spring. The concert is free and open to the public, but seating is limited.