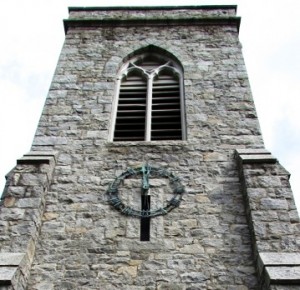 St. Philip’s tower clock gets a tune up

Howard Broad has a lot of time on his hands every day – and he isn’t even retired. Broad owns and operates Country Clocks on Cold Spring’s Main Street, a business he started 19 years ago.

His shop is home to a fascinating array of time keeping devices, but in recent weeks Broad has been busy working on a clock that couldn’t just be brought to his store for repairs – the tower clock at St. Philip’s in the Highlands Episcopal church located across from the Garrison School on Route 9D. 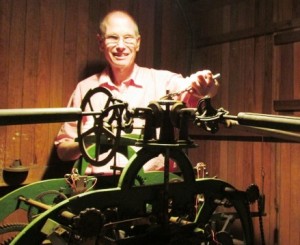 Broad adjusts one of the clock’s 125 parts

The St. Philip’s clock, which dates back to 1915, is deceptively simple in appearance when viewed from the ground. A patina-green metal circled with Roman numeral hour markers and similarly colored hour and minute hands adorn three sides of the stately limestone tower. But inside, the device that drives the clock’s three faces is considerably more complicated.

“It has 125 moving parts,” Broad said after scampering up the heavy metal ladder inside the tower to get to the device. “It’s a mechanical mechanism that originally ran on weights that traveled from the top of the tower down into the basement.”

Once a week someone had the task of turning a large crank, returning the weights to the top of the tower and starting the cycle over again. In the 1930s the weights were replaced by electric motors. “They’re still the original motors,” Broad said. “They work the best. Really good grade copper. You can’t beat them.”

There can be disadvantages to such technological progress however. Broad said that with the old weight system, the clock could always be relied upon for the correct time – even in the most extreme weather. Now, with electric motors powering it, the clock stops every time there is a power failure – and that means someone has to climb the tower each time to reset the clock.

Broad’s current task is more maintenance than repair. “There is no damage. It just needs a good thorough cleaning. The old oil has to come off. Each piece has to be cleaned with solvent and then treated with ‘turret oil’ made especially for tower clocks.”

“It’s very accurate,” Broad said. And when the time comes to restart it, what will he use to determine the correct time? “I always set the time from the radio – and I use a wind up wrist watch.” 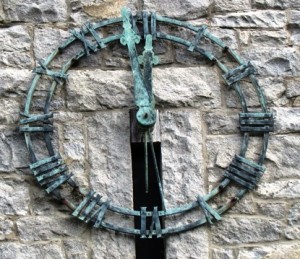 St. Philip’s clock was manufactured by E. Howard & Co., a Boston-based clock and watch maker with the tag line, “The Nation’s timekeepers since 1842.” Broad said that the former New York Life Insurance building at the corner of Leonard and Broadway in New York City,  now owned by the city, houses a similar though much bigger E. Howard & Co. clock in its tower.

He said many tower clocks in the city are being kept up – including at Grand Central Station, Harold Square and Macy’s. The bells in the church tower are also being refurbished. Broad said that he believes St. Philip’s has the only clock tower in Philipstown and “the only one I know that plays Westminster bells – like Big Ben. They play on the hour at the hour and on the quarter hour.”

The 58-year-old Broad went to work at age 16 and was employed as a draftsman with Bell Telephone before enrolling in the Bulova Watch and Clock School in 1983. “They only teach watch making now. There is a great need for people who can fix watches,” he said.  He doesn’t see the trend towards relying on cell phones to keep track of time as a threat. “There will always be people who will want a nice watch.” 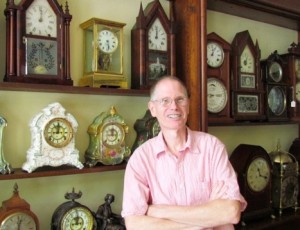 Broad inside his store

Back in his Main Street shop, Broad has no trouble identifying his oldest time piece. “It’s an English Lantern Clock from 1690 – the first domestic clock offered.” He was, however, unable to identify his favorite. “It’s hard to say. It’s like saying ‘who’s your favorite child?’ ” There’s something about each one. They’re all different. They each have a certain character.

Collectors and clock enthusiasts aren’t the only ones who visit Broad’s shop. “Anyone who opens the door is welcome. They don’t have to buy anything. They ask questions – and I like that.’ He said that teenagers sometimes drop in and “all of a sudden they are mesmerized” by what they see and hear. He also said that in the wake of digital technology, “A lot of kids don’t know what a quarter past the hour means.”

Broad sums up his fascination with and affection for old style clocks this way: “Everything today is push button. With an old clock you wind it up, it ticks. There’s a warmth about it. I don’t think you get that from your iPod.”