Social media and internet are participants in the journey

Three boys from Maine on a road trip

Drivers headed north or south on Route 9D on Wednesday may have noticed an unusual sight by the baseball fields’ parking area: a bright green school bus gussied up with a map of the U.S. and various social media logos and the enigmatic wording of lovethebus.tv inviting second and third glances.  A visit to the bus, whose actual name is “Chartreuse” revealed its origins and purpose.  The concept for The Love Bus began with three self-described “boys from Maine,” Seth Brown, Tyler Dunham and Corey McLean. From a town even smaller than this one, the three have been friends since early childhood, and they have always been athletic, outdoorsy and in search of adventure. As kids they built an extensive snowboard terrain park in the woods, complete with jumps and obstacles – things they are still employing in their current venture. By their teens they fundraised to bring a full-scale terrain park to a nearby mountain. Eight years later, the park is still in use. 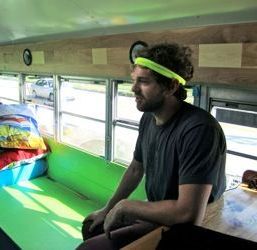 Corey McLean, one of ‘the Maine boys’

Now, having recently graduated from college, they were seeking one last group hurrah and came up with the notion of, as Brown puts it, “Don’t start looking for work - let’s go buy a bus!” Or, as they describe it on their website:

We bought a bus to take a road trip. Always movers and shakers, we couldn”t quite stop there and so we built this platform to give back as we went. Essentially, as we drive our bus across country, we’ll accept challenges from our viewers. We’ll attempt to complete one of these every week, and if we do, we’ll give money we raise in that location, plus an equivalent amount of money we’ve already raised, to an organization that our viewers also suggest. We also post videos nearly every day to update our followers of our location and travels.

They plan to fuel their vehicle almost completely with vegetable oil (a small amount of diesel is needed to flush grease out at the end of day). They’re trying to partner with waste contractors and will also be going to restaurants en route and getting grease out of their grease traps. 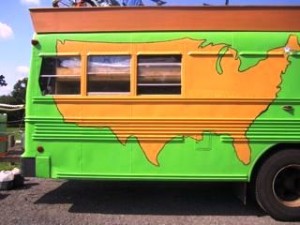 The goal – making it across the nation

Backed by their families, they have had a lot of help from parents and other relatives in gearing up for the trip, in particular with the professional carpentry, which has given a polish to the bunks (six in all) and countertops inside Joining the threesome, just over a week ago, are two more adventurers, Kevin, a friend from Boston, and Kelsey, herself just back from earlier adventures in Thailand. Kelsey was excited about joining the group, “It’s nice to be around people who want to do the non-traditional.  How can you gain a perspective on the world without knowing the full range of your own country?”

The beginning has been challenging, to say the least. Departing from Maine on July 10, after 10 months of planning, the bus broke down and a broken fuel injector was diagnosed. In repairing it, other misadventures ensued, delaying their real start by three weeks.  But “Chartreuse” is now back in action, and with a stop in Cold Spring (where good company was provided by Seth’s aunt, Karen Shea and her family) the Maine boys were pulling out on midday Wednesday, headed for the Big Apple, where a challenge – crossing Manhattan in a three-legged race, drawing in Manhattanites to participate -awaited. Other challenges have come in the form of technology, with unanticipated difficulties in accessing the amount of speed needed for rapid Internet connections on the road; that’s a work in progress. 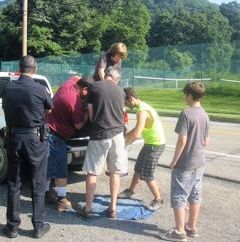 Jeff Amato (red shirt) helps out with a fuel delivery

Helping them with fuel provision was Philipstown’s Jeff Amato, who was unloading barrels of fuel for the group when Philipstown.info arrived on Wednesday morning. When Brown said that “we should run it through our centrifuge,” Amato countered with, “Big words – college kids!”  Contributing other provisions was Philipstown’s Joanne Delmonte, whose daughter knows the Maine Boys and had emailed her about their stop in Cold Spring, and who arrived bus-side saying “I brought you some goodies.”

This kind of serendipity is exactly what the group has in mind for the rest of their trip.  They will be guided by “viewers” who follow the group online and make suggestions for places and causes they love. The group will choose from amongst the suggestions. As Brown puts it, “We are the vehicle, but everyone will be able to see it done through us.”  The goal is to make it to Los Angeles by sometime in October, exact route taken to be determined. The project has already inspired the next generation, with eighth-grader-to-be Nolan Shea impressed by it all, “It’s really the idea of doing stuff I would want to do - the challenges – and raising money for causes while you’re doing it -that’s so cool!”

As for their name, which is reflected in their website, here’s an explanation from the site: “The title came a few weeks in as our signature for the trip: as we travel the country attempting to do good, we would sign our progress ‘Love, the Bus’ in the same fashion a post card to a loved one is signed.”

Asked where they would be parking for their imminent New York City stay, Brown replied truthfully, in the spirit of the venture, “We’re about to find out!”  Their website cites as inspiration, this Margaret Mead quote:

Never doubt that a small group of thoughtful, committed citizens can change the world. Indeed, it is the only thing that ever has.

To follow their exploits over the coming months, visit lovethebus.tv.