A vehicular crime spree occurred in Cold Spring this past week with one or more persons stealing two cars, crashing another and breaking into one or more vehicles and stealing property.  Details remain sketchy, but both the Putnam County Sheriff’s Department and the Metropolitan Transit Authority (MTA) have confirmed different parts of the story. Law enforcement officers also believe that all the incidents are connected. Both the MTA and the sheriff are conducting investigations. The Cold Spring police department is also likely involved, but its participation could not be immediately confirmed.

Through interviews with police and village residents, Philipstown.info learned that late Sunday or early Monday  (Aug. 7-8) an individual (possibly with a companion) drove a vehicle to Cold Spring, likely from Beacon. That car was involved in a one-car accident in the vicinity of Fair and Main Streets and abandoned, according to the Putnam County Sheriff’s Department. Whether this vehicle was stolen remains unclear. Subsequently, someone stole a vehicle from the Cold Spring Metro-North parking lot. No information was available on the make or models of the vehicles or the identification of the perpetrators(s). Reports that cars were also broken into and items stolen along Constitution Drive, which is near the train station, could not be confirmed. 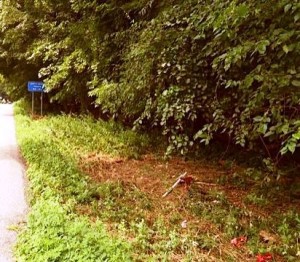 Scene of Route 9D car crash--memorial cross on the ground

According to MTA spokesperson Margie Anders, the vehicle stolen from the Metro-North lot was later recovered after being abandoned. She could not place a time or location on the recovery, but did connect it to another auto theft in the village shortly after that.

John Teagle, caretaker of Little Stony Point, said he was awakened by an auto crash very early Monday morning across from his home on Route 9D just outside the village boundary. According to Teagle, the car was headed north and swerved off the road, knocked down a white wooden cross memorializing an accident five years earlier, and then crashed into a tree with the car ending up on its side pointing south. “I figured the driver and passengers were dead or at least unconscious when I ran out,” said Teagle.  After a passing driver called 9-1-1 Teagle retrieved a fire extinguisher from his house to douse smoke coming from the car. “When the smoke cleared no one was in the car,” he said. 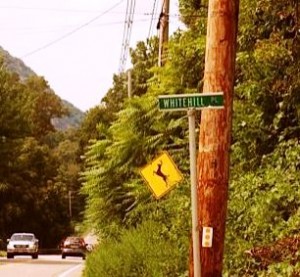 Location where last car was stolen

That same night, a 2001 Mercedes sedan was stolen from Gillian Thorpe of Whitehill Place off Route 9D, just up the hill from the accident Teagle reported. Thorpe said she reported it missing at 8:15 a.m. on Tuesday morning. That car is still missing and may hold the key to the identity of the perpetrators. Aaron Freimark also a resident of Whitehill Place told Philipstown.info he reported a break-in of his car during the same time period.
Photos by K.E. Foley