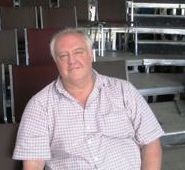 This is the second of a two-part interview with Hudson Valley Shakespeare Festival (HVSF) Artistic Director Terry O’Brien.  The first part dealt with the Festival’s early years in Philipstown.  This part addresses the present and future of the organization.

Audiences now associate the HVSF with a very specific style, one which, without changing the text, contemporizes the language through cadence and tone, and one which injects a playful, often musical or dance-connected spirit into the proceedings of many of the plays.  Terry O’Brien says the style has evolved over time. “In the first few years, we were very reverent to the text and maybe too irreverent in style. We were, perhaps a little more sophomoric in the beginning and in retrospect, some parts were read wrong then.  We’ve gotten more toward what the line really means now. Some of our tongue and cheek went against it and now I’m not as tolerant of it as I was, although it’s okay if it goes along with it. Now it’s about enhancing our skills. It’s important for us to constantly feel that we’re getting better and to understand it more deeply  -how to do Shakespeare in a way that makes it spontaneous.  The formality of the language makes people rely on memorization; it’s important for us to be out there and not know what we’ll say next.”

The physical site has evolved along with the style; several years ago a capital campaign resulted in the purchase of the white-sailed tent which is visible from the river and the trains along the river. This tent was constructed to withstand 120-mile-per-hour winds.  There has been only one cancellation in the Festival’s history (in 2010 when a major storm and power outage acted in cahoots), and O’Brien says the biggest weather-related issues are sound problems – when the wind get too loud and drowns out the actors.  They do stop, at times, when it gets too loud, but have only had to evacuate the tent once; the audience decamped to the Boscobel house for 15 minutes before the performance resumed. 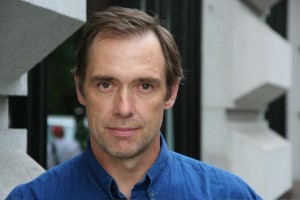 Less-known to audience members is the Festival’s off-season emphasis on education.  Under Director of Education Chris Edwards, HVSF workshops, now in their 17th year of operation, reached over 37,000 students and teachers throughout the Hudson Valley and tri-state area during the 2010/11 school year. Bottom of Form  Regular visits have been made to Haldane and O’Neill High Schools as well as many other regional schools. In addition, teachers, such as Garrison School’s Ian Berger, have participated in workshops and have brought the HVSF style to their classrooms. (See  for the full story on the result of this).

Nurturing directors and future directors is also a priority.  O’Brien notes that most have “come through the ranks of acting here: Kurt Rhoads, Chris Edwards and now Ryan Quinn, who is directing the Romeo and Juliet apprentice show this season. A big part of the role of director is management, and it’s hard to take a college-age person and give them those duties. They need experience behind them. For someone like Ryan, he’s at the perfect point to step in with our vocabulary. In theater you need to mentor and to be mentored.  The practical side of it is not taught in schools.  It helps one’s own directing to mentor others.  In the process of teaching, I started to understand what I had learned and it deepened my understanding of what I do; it’s so important to have a strong investment in mentoring “it’s key for the evolution of an artistic organization.” 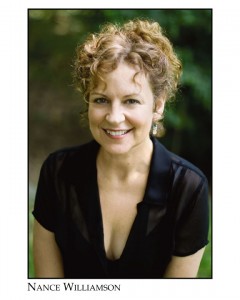 It is hard to talk about 25 years of HVSF without mentioning HVSF mainstays, actor and director Kurt Rhoads and actress Nance Williamson (who are married.)  Between them they have appeared in numerous productions, and in recent years Rhoads has shifted to directing, handling the recent Taming of the Shrew and this year’s Comedy of Errors. Here are Williamson’s reflections on these years:

“My relationship with the festival started as an audience member when Kurt started working at HVSF in 1995 and we just fell in love with the Hudson River Valley! Kurt and I moved to New York in 1992 after meeting, marrying, and starting our professional acting careers in Dallas. We were members of the resident acting company at the Dallas Theater Center, working during summers at Shakespeare Festivals in Dallas, Ft. Worth, Colorado, Utah, and Wisconsin.  We were pretty lucky when we came to New York, getting agents and working in regional theaters across the country, on Broadway and off-Broadway, TV and commercials.  But our early theater lives blossomed in an acting company so even though we were very fortunate in being able to work we both felt a need to find a company to call ‘home.’  HVSF became a summer time home of sorts – we could work together (which was the most important thing), work in one of the most beautiful places and speak some of the best words written.

I started working at HVSF in 1998, and Kurt and I were privileged to play some of the great couples: the Macbeths, Antony and Cleopatra, Beatrice and Benedick, as well as some of the great comic parts. We got to know the audience and members of the board and generous hosts who opened their homes to the company for barbeques, pool parties, and summer merry making.  We started house hunting and found a cottage in the woods and left our lower east side apartment in the city in 2002. We still work around the country during the non-summer months, but HVSF has been a summertime anchor to our transitory lives for 16 years.  We are very grateful to have found not only a place to work but in a bigger sense discovered a community which has been so welcoming and given two actors a home.” 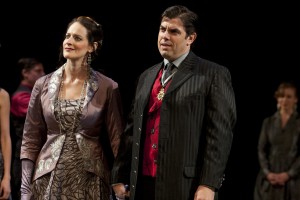 Another local resident whose talents have been tapped into, is costume designer Charlotte Palmer-Lane, of Cold Spring, who has created the costumes for one of the productions (Hamlet, this year; also Troilus & Cressida, Pericles and Twelfth Night) each of the past four seasons. O’Brien described Palmer-Lane, who has designed for the BBC in London and was assistant designer for the Robert Redford film Quiz Show, as “very interesting, artful and hard-working.”

There is much new-ness this year at the festival. The recently-appointed Executive Director Maggie Whitlum, who, from 1987 to 2007, was General Manager at the National Theatre, London, has just begun, and the festival finally has a Main Street storefront office, something O’Brien is excited about. “Having a visible address puts us in the middle of the community in a good way. Hopefully we will be able to cross-fertilize with people who are in business there. In the past, we had a – hidden – space, which made it appear that we were a road show; it was easy to perceive it that way.  We’ll be able to sell tickets there, maybe host a few events, plus it gives us a lot more office space.  There’s also room for a lot more community involvement; a lot of people still never come here. We need to shake the conception that it’s an ivory tower experience.”

O, that a man might know
The end of this day’s business ere it come! (Julius Caesar)


“Really what I’m always thinking about is the next 25 years,” mused O’Brien. “In our original statement of purpose it said we will – distill rather than embellish.”  What was at the core of the play?  We haven’t done it perfectly, but it’s one thing that’s been a constant: How did we get to 33,000 [audience members]?  I don’t know.  We’ve done well critically; a few pieces in the New York Times get people in the door, and then they come back. Switching to a repertory pattern has been great - it allows audience to see the same actors in different guises, see the possibility of what actors can do.

The goal is to have audiences taken where they need to be taken by the essence of the theater. I’ve begun to understand that more and incorporate it into my work; to understand what plays to the strengths of the theater.  How do we carry that forward?  It”s really about a fundamental way of communicating: evoke and maintain a culture beyond what we can do in this space. Enhance our ability to tell stories that allow people to come in and vicariously go to places they might not go to. They can learn about themselves.  The more that you go to the things that it can do, the stronger it is and the more it will be around -We’ve evolved a style of acting that is ours; now we need to learn how to be custodians of it so it stays alive.”