Study of sports fields to be complete in October

When the Haldane Board of Education met on August 16, with an agenda dominated by sports, the starting lineup remained the same, however the seating arrangement at the front of the room reflected the board’s new batting order. Joe Curto chaired his first meeting as newly elected board president. To his left sat Gillian Thorpe, who now serves as vice president. To her left was trustee Dave Merandy, immediate past president and now also a candidate in the upcoming Town of Philipstown election. To his left sat veteran trustee Evan Schwartz. Trustee Michael Junjulas was unable to attend.

Determining the future of local playing fields is at least one area where the often-cited need for cooperation among various levels of government and community organizations is becoming a reality –  Haldane, the Town of Philipstown, the Village of Cold Spring and several local organizations are pooling their resources and providing the financial backing to undertake a study to assess the condition of area baseball diamonds, soccer and football fields and other playing surfaces. The study, to be completed by the end of October, will also recommend improvements to ensure the fields effectively serve community needs. Trustees approved Haldane’s funding of up to 50 percent of the study’s estimated $18,000 cost, which will be conducted by Ward & Associates, a consulting firm specializing in such studies. Two other firms also responded to the request for proposals.

Merandy suggested that a recently approved $150,000 grant from New York State, spearheaded by State Senator Greg Ball, to upgrade recreation facilities at Haldane, be used to fund the study. “Why not use the Greg Ball grant to fund the study 100 percent? These groups’ coffers aren’t exactly overflowing,” said Merandy referring to Pop Warner Football, Little League Baseball and other groups, which are contributing amounts in the $500 range to help complete the study. The Village of Cold Spring is also contributing $500. Haldane Superintendent Mark Villanti said he would look into the matter but expressed doubt state funds could be used for the study because the grant is intended to pay for improvements only at the Haldane campus.

Haldane officials will welcome Ball on September 14 to recognize his sponsoring the bill authorizing the $150,000 grant. “We tried to keep the grant application flexible, pending the report on the playing fields,” Villanti said. “We want to wait for that study and spend the money wisely.” Villanti said that there has been “a lot of discussion about tax dollars making their way equally to this side of the county” and that Ball had recognized the need to improve Haldane’s facilities. Villanti also praised Putnam County Legislator Vinny Tamagna for bringing the situation to Ball’s attention. “It’s safe to say that the list of needs far exceeds the grant,” Curto said. 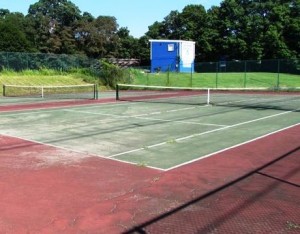 The only heated discussion of the evening centered on the condition of Haldane’s tennis courts, located along Morris Avenue next to the football field, and what to do about them. Curto, who operates a tennis facility in Westchester, described the courts as, “An absolute disaster and a disgrace.”  But rather than ripping up and completely rebuilding the two courts, an undertaking that he said would cost $30,000 to $40,000 each, Curto proposed a makeover that would include power washing, patching cracks and relining. He said that approach would cost approximately $18,000, resulting in courts that would look like new and that would last at least five to seven years. Haldane’s tennis club has raised $2,000 towards the repairs and Curto is also pursuing a grant through the U.S. Tennis Association. “The courts are very well used – by the public, by kids – and the [Haldane] tennis team has been re-established,” he said. He was supported by Thorpe and Athletic Director Tom Cunningham when he proposed that the repairs be undertaken right away.

Merandy strongly disagreed. Instead, he proposed completely reconstructing the courts – but only after the Ward & Associates study is complete. “I wouldn’t want to spend any money until the study comes out. I think we should spend a huge chunk [of the N.Y. State grant] and do it right.  I think the Greg Ball money is supposed to be for the community and not just the school. This falls exactly under what that grant is for. We should not just throw money into it [now].” Curto argued that having two courts is not the best configuration and that as a result reconstructing them doesn’t make sense. “You can’t program two courts.”  He said three or more courts is optimal. “I would never put that kind of money into two courts.” He repeated his support for refurbishing them immediately at considerably less cost. The sometimes edgy debate between Curto and Merandy resembled a tennis match – with the same arguments going back and forth a number of times.

Schwartz also spoke in favor of waiting until after the study is complete before making a decision. With only four board members present, Curto’s proposal could not be approved. “I suggest adding this to the agenda on September 6,” he said.

When large, non-school-related public events such as zoning forums are held at Haldane, Merandy asked trustees be notified in advance. He also asked that the board make a greater effort to notify local businesses when bids are requested for work projects at the school. He said local business owners aren’t always aware of an opportunity to bid and a single legal notice in the PCN&R may not be adequate. “They don’t necessarily see the paper,” he said. He suggested an email list could be developed for giving notice.

Merandy also suggested declaring a moratorium on establishing new sports teams until a complete procedure for such proposals is established. “We need to have more of a protocol – and compete forms.”  He said at present it is difficult if a proposal is received but not approved, “It makes it seem that we’re against that sport. I’d like to come up with some type of formula.” Merandy said. Curto said that he has submitted a procedure, that he would “tweak it” further and asked Cunningham to do the same.

“He’s a one-man team.” That’s how Superintendent Villanti described Haldane’s bus mechanic Murray Prescott. Trustees recognized Prescott at the outset of the meeting, praising him for the quality of his work and the top marks he received recently in the annual inspection and safety analysis of Haldane’s bus fleet conducted by New York State. “They are very careful and with good reason,” Villanti said. “They’re dealing with the kids’ safety.” Prescott received a mark of 96.1 percent in the original inspection and a grade of 100 percent in the re-inspection. “Murray is one of those unsung heroes,” Curto said. He’s been here a long time – and is probably one of the best ever.” Prescott’s reaction after the words of praise and a hearty round of applause was short and sweet. “Thank you,” he said.