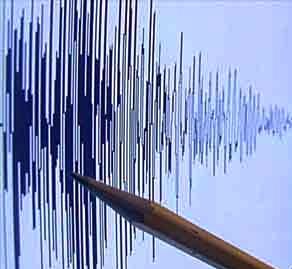 A 5.9 earthquake that forced evacuations of buildings in Washington, D.C.; Ohio, and New York City rumbled under the Hudson Valley as well Tuesday afternoon, as Philipstown residents reported shaking floors, trembling walls and upset pets. Centered in Virginia about 90 miles from the nation’s capital, the earthquake was felt with varying levels of intensity as far south as North Carolina, as far west as Cincinnati and as far northeast as Martha’s Vineyard, off the Massachusetts coast. It caused the evacuation of parts of the U.S. Capitol, the White House, and Pentagon, as well as the Department of Homeland Security in metropolitan Washington; the Virginia state capitol in Richmond, government buildings in New York City, and non-government buildings in various places, including Columbus, Ohio.

Cold Spring resident Christopher Boyle of Marion Avenue said he “was sitting at my computer at around 1:45 p.m. on the ground floor of my house when I felt the house shaking — the tremor lasted I would say about 30 seconds or so, followed by a milder aftershock. I called my next door neighbor and he said he hadn’t noticed anything, ” nor did Boyle’s wife, upstairs. ““To me, this is unprecedented!” Boyle said. 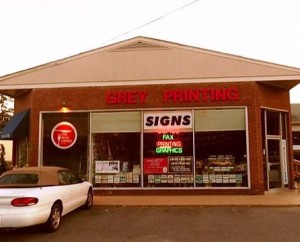 At nearby Grey Printing, “everything was just kind of shaking,” said Alison Faha, a staff member. No damage occurred, she said, and not a single photo of the multitude that adorn the walls came down. Nonetheless, “it was kind of surreal,” she said.

Continental Village resident Monica Pronin initially attributed the disturbance to her cat, which likes to sleep in a kind of open attic loft. “There was something of a big thump in my house” from the earthquake. “The cat jumped out of the attic as it hit. I did feel it a bit,” said Pronin Tuesday afternoon. She said she soon realized that something more significant than feline comings and goings had taken place. “It didn’t make sense, that kind of vibration from a cat,’ she said.

Joan Clauss, deputy town clerk, said she was outdoors at Philipstown’s Town Hall and did not feel anything when the trembling began, but that inside the building another clerk’s office employee felt her chair moving.  Several blocks west down Main Street, Cold Spring Village Clerk Mary Saari reported a similar phenomenon. While she did not personally notice anything, elsewhere in the relatively small village hall, employees felt chairs shift or other odd movements, Saari said.

At the Foodtown grocery, cereal boxes suddenly began “just sliding around” on the shelves, though none fell and no problems occurred, Charles Hustis, a Foodtown employee and Cold Spring trustee, said Tuesday evening as the Village Board of Trustees convened.

Michael Turton, Philipstown.info editor-at-large, reported several people at The Hastings Center where he works on Route 9D in Garrison, felt the quake while others, including himself, did not. “Susan Gilbert works right across from me and felt her keyboard start to vibrate strangely. Up on the second floor, Siofra Vizzi said she froze for a second when she felt her chair move under her. She started wondering about ghost stories she has heard about the building — until a colleague walked in and said that the water in a glass on his desk had started moving on its own.” Turton said that staff immediately started to receive calls, e-mails and text messages from friends, relatives and colleagues up and down the east coast. Director of Public Affairs and Communications Mary Crowley heard from her brother who said that his building had been evacuated — in Boston. Gilbert’s husband, who works in Hoboken, said his building evacuated. 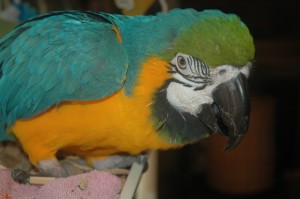 Hoss, a macaw, hunkered down on his platform during the earthquake

On Morris Avenue in Cold Spring, the earthquake caused the floor and walls in an approximately 150-year-old home to shake, while hanging pictures swayed. Perhaps sensing the quake a couple of seconds before it occurred, a parrot abruptly flapped her wings on her perch and a cockatiel several feet away flew madly across the room, while their “flock-mate,” a crippled macaw, hunkered down on his padded platform. Two flights up, another macaw screamed loudly from his cage as the house shook. But in the basement, with thick stone walls and floors, a workman did not notice a thing.

Two nuclear power plants near the quake’s epicenter in Virginia shut down automatically.  According to numerous news services, Indian Point officials reported feeling some vibration but said the plant continued to operate normally throughout the brief episode. Opponents of the plant, located 10 miles south of Philipstown, wasted no time in referencing the earthquake as a reason to think about closing the plant. “According to the Nuclear Regulatory Commission, Indian Point is designed to withstand a 5.8 earthquake within a 50-mile radius of the plant. This one was 5.9 and 200 miles away. This unpredictable act of nature brings home the fact that closing a nuclear reactor situated in a 50-mile radius of 20 million people is about a lot more than generating electricity,” said Marilyn Elie of the Indian Point Safe Energy Coalition in an email.
Photos by L.S. Armstrong