Part of cinematic history and still a unique experience

Reporters Note: I have more than an average affection for drive-in movie theaters. When I was a young boy of 10-12, I’d walk to the drive-in with my oldest sister Nancy who worked there in the concession stand.  I sat outside on the benches and watched many of the sword and sandal movies of the day “Hannibal,” “Samson and Delilah,” “Hercules” and the like, while she snuck a steady supply of hot dogs, popcorn and Coke out to me.  As teenagers, my friends and I snuck into the drive-in on many weekends  not using the common kids-in-the-trunk method, but by stealthily walking in from the railroad tracks behind the theatre and sitting on the benches just outside the snack bar. We wanted to watch the movies for sure, but when the owner occasionally caught us it provided added adventure in the form of chaotic, adrenalin-filled escapes. I worked at the drive-in when I turned 17 taking money at the box office as cars wound there way in, at the snack bar during intermission and then back at the box office, collecting speakers as the crowd left at the end of the night. Seven of the eight kids in my family worked there at one time or another. So it was with a strong sense of deja  vu that I recently paid a visit to the Overlook Drive-In located on the southern outskirts of Poughkeepsie. Part of me dreaded going because I knew it wouldn’t be the same. But I’m glad I went. 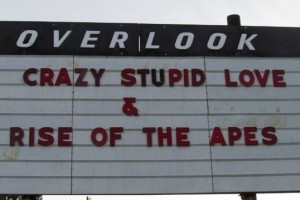 The sign at the entrance to the Overlook Drive-In is poetic. It, like the facility itself  may be past its heyday, but it still boasts a double feature  Stupid Crazy Love, starring Steve Carrel and Julianne Moore and Rise of the Planet of the Apes, starring – well- quite a number of apes. When I pulled up to the box office, John Pijnappel gave me a very friendly greeting. He’s been doing that for 17 years and it’s still genuine. His welcome became even more amicable when he gave me free admission after I explained that I was there to write a story. I felt the need to get that message out very quickly – not in hopes of a freebie, but to ensure I didn’t get that knowing stare that says,  So why is a guy his age going to the drive-in all by himself?  I had used that same stare a number of times during my drive-in employment.
The low, curved berms that help align and tilt the cars up toward the large screen still have those polls that seem to grow right out them, but long gone are the small, crackly speakers they once held, having given way to 87.9 FM on the car radio as the source of the movie’s sound track. Nostalgia is great but I had to admit that the stereo sound in my Honda Accord was far superior to the old static-prone speakers. (Click here for a short video.) 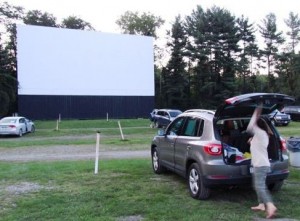 Getting ready before the show

There was only a smattering of cars, but I had arrived early. Someone was cleaning his windshield. I looked at my bug-splattered windscreen. The thought of bringing Windex never entered my mind. My windshield wipers and fluid improved matters  but only marginally. Someone else was generously applying bug spray. That never occurred to me either. I started to recall that going to the drive-in  by car at least  requires a bit of planning.
What I did plan  was to not bring any snacks. I couldn’t wait to experience the snack bar  the place where, in my day, I had made mountains of popcorn and where one night early in my tenure I had forgotten to turn off the tap to the large glass orange soda fountain. I couldn’t believe how the women I worked with screamed when they saw that the entire counter top was flooded with sticky orange liquid. 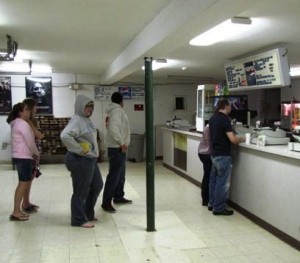 The snack bar is small, but offers everything any red-blooded drive-in-goer could expect  hot dogs, hamburgers, fries, soda, ice cream, nachos and more. Doug Downing has been assistant manager for 12 years. His dad has been manager for the same period. “A lot of friends and family have worked here, the younger Downing said. He has no trouble listing some of his favorite moments. I like it when lightning hits the all metal screen during a scary movie! But what he really appreciates is the fun family atmosphere. When a super-hero movie is playing people come dressed up. The whole family comes  even the pets. They come early and play catch or kickball. When I bragged about how my friends and I used to sneak into the driver-in he nodded knowingly and said, They still try to sneak in. I see kids getting out the trunk. Just like a regular drive-in. 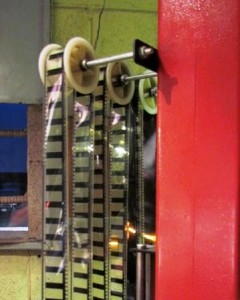 Frame by frame: 35 mm film does the job

It was a  sparse turnout that night; a weeknight when the Dutchess County Fair was in full swing and parents were starting to think about getting kids back into school. Only 37 cars dotted the parking area that can hold 750. But it isn’t always that way. We’ve sold out  like for Spider Man 2, Downing said. Cars were lined up down the road. And at intermission there were three lines of people all the way from the screen to the concession stand. Downing also recalled with more than a little glee in his voice the night that the snack bar’s grill blew up and caught fire, flames shooting out. We just kept putting hamburgers, hot dogs on the grill. People would say, “Do you know the grill is on fire?” and we’d say “Yes” and keep cooking!

Erinn McGurnn and her husband live in Park Slope, Brooklyn and made the drive up to the Overlook with their twin three year-olds. This is our first time here  but we’ve been to the one near Warwick several times, McGurnn said. She grew up in southern California. As a kid, going to the drive-in was all we did  all year round.   Asked why she continues to watch movies from her car she said, “It’s partly the nostalgia. But it’s the whole experience  the snack bar, kids running around, and the price.” 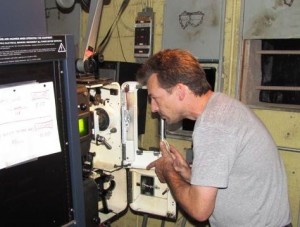 Helge Bernhardt ensures that the picture gets from the projection booth to the big outdoor screen. He couldn’t have started his self-taught trade much earlier.  “I started when I was eight  on the Super 8 projector at my grandfather’s house. Then in high school I always ran the movie projector because most of the teachers didn’t know how to run the equipment.” He also worked as a projectionist at the U.S. Military Academy at West Point and adds to that a stint he did at a 1,400 seat movie palace in Bonn, Germany. When he’s not working as the Overlook’s projectionist, Bernhardt  is a filmmaker in his own right. 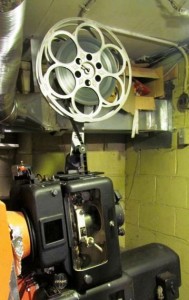 The same projectors have been used for more than 60 years

He refers to his vintage 1952-1953, 35 mm projector at the Overlook as “my baby.” It throws the picture some 230-feet to the screen, which at 110-feet wide, Bernhardt said is the biggest in the tri-state area if not the entire east coast.  At intermission, he took great joy in putting up a reel containing the three-minute “clock show” which warns movie goers they have just three minutes left to visit the snack bar before the start of the second feature. Then two minutes, then one minute. The ending includes a big plug for Dr. Pepper; “It’s frosty.” It’s also still served at the snack bar. Bernhardt plans to take a page out of drive-in history by producing advertisements that feature local businesses. He has a deep appreciation for the heritage of drive-ins generally – and the Overlook in particular.  He recently found an old Overlook program from the late 1950’s or early 1960’s that features ads for such movies as “East of Eden,” “Vera Cruz,” and “The Bridges at Toko-Ri.”  He plans to frame it.

Fred Cohen has owned The Overlook since the early 1950’s. The night after I visited he was busy selling tickets at the box office. Cohen also operates the Hyde Park Drive-In. According to Drive-Ins.com there are still 370 drive-ins operating in the U.S.  In 1958, at their peak, there were between 4,000 and 5,000.

Reporter’s Footnote:I got fired from my job at the drive-in for reasons I won’t go into here, but which I strongly believed did not merit dismissal. My boss, Johnny, did regain his senses and rehired me about a week later. He needed extra help for what was the Windsor Drive-In’s first foray into first-run movies – “Hell’s Angels.”  What a night it was. Cars lined up for close to two miles. Police with nasty looking dogs were called in to manage the 40 or so members of Satan’s Choice motorcycle gang who rode in to see the movie. They had to park their Harleys outside the box office area and walk in. It was, to that point of my life, the silliest scene I had ever witnessed. Forty big, burly, bearded, tattooed bikers standing politely in line outside a drive-in as I took their money, handed them their ticket, being careful to say,” Hope you enjoy the show” to each. The absurdity of that scene was actually surpassed just a little later when I walked back to start my intermission duties. On the snack bar benches sat those same forty burly bikers, each munching contentedly on a bag of popcorn, thoroughly engrossed in the Bugs Bunny cartoon.  Only at a drive-in.
Photos by M. Turton

2 thoughts on “The Drive-In Theater Lives On”