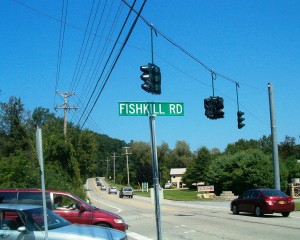 After more than a year, the long-awaited traffic signals have been installed on Route 9 at Fishkill Road. According to Melissa Slater, spokesperson for the New York State Department of Transportation, the new traffic light should be operating in two to four weeks, or by Sept. 19. Slater said (Aug. 22) that the electric power still had to be installed and then everything needs to be programmed. She was unsure whether it would be 3-way or 4-way signal. Concern had been expressed at a public hearing last April that there would not be a light facing east (for traffic exiting the gas station); a condition that many felt was potentially dangerous.
Photo by M. Mell