That wasn’t nearly as bad as predicted was a common reaction around Philipstown on Sunday. Nevertheless, Hurricane Irene still took a heavy toll. Residents had to be rescued, roads were closed, dams were at risk, trees were down, power was lost and houses were flooded. The most dramatic scenes took place early Sunday afternoon on Route 301 just east of Route 9.  Several families had to be rescued from their homes along Clove Creek, which heavy rainfall had turned into a raging torrent. One couple, who asked not to be named, described what happened. The water came up so fast we couldn’t drive out [of our driveway], the wife said.  It took just fifteen minutes – from the time I could walk to my car with a suitcase to the time I no longer could [get to my car], the husband said. He, his son, wife, her parents, and their dog, were rescued by local firefighters using a raft. Three local fire companies – Garrison, North Highlands and Cold Spring – responded to a number of rescue calls at residences along that section of the creek. They were just fabulous, the wife said, describing the firefighters’ efforts. Her husband said, It’s now about next steps, and at some point being able to go back to our house. After being rescued the family was taken to the North Highlands Firehouse, which had been set up as a shelter. 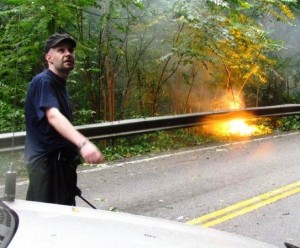 Further east on Route 301, a power line downed by a falling tree created a hazardous situation as the live cable came to rest on a long metal guardrail. Sparks and fire flared. Traffic was halted in both directions until crews could deal with the situation.
Clove Creek also caused numerous problems along Route 9 north of Route 301. Cars in the RK Used Cars lot were badly flooded. The bridge at Cross Creek Road was destroyed. Stephen Carlson, who owns property on Carlson Court, said that a number of partially filled fuel tanks floated rapidly downstream and collided with the covered bridge that leads to his property. Philipstown Plaza flooded. Traffic on Route 9 was disrupted due to flooding just north of Fishkill Road. Fishkill Road was closed due to flooding. 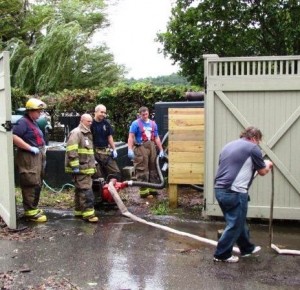 On the Cold Spring waterfront, crews worked to repair the West Street pumping station which pumps sewage to the treatment plant next to the village truck yard. The dry well at the station had flooded, causing the pumps to shut down. The sewage treatment plant itself had to resort to generator power.
Several homes below the railroad tracks suffered serious basement and ground flood flooding. Barry Sokol lives at 9 Main St. Our basement had six feet of water in it, Sokol said. We put a lot of money into redoing the foundation, a new sump-pump, new heating and cooling system and new oil tank, he said. Sokol fears that the heating and cooling system have been ruined and that our electric might be toast. The basement also contained many of his family’s personal belongings. Sokol said he thought the Village of Cold Spring was ill prepared for the flood and that not enough was done to aid residents west of the railroad tracks. 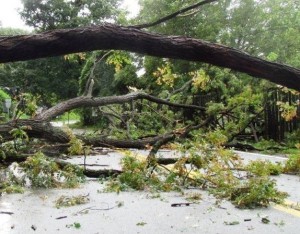 On Fair Street near Route 9D, a large tree fell across electrical lines early Sunday morning, knocking out power to much of the lower village.  Power wasn’t restored until around 5 p.m. A second outage around 8 p.m. resulted in a number of Main Street buildings including Philipstown.info, Hudson Valley Outfitters and the Foundry Cafe to again lose power.
Earlier in the day, Foundry Cafe owner, Jeff Consaga, received a hearty round of applause from appreciative customers, grateful that he had remained open using candlelight. When power was lost for the second time, Consaga feared he would lose his inventory of meat, frozen foods, dairy products and the like. The owners of Go Go Pops, just across Main Street, rescued him, temporarily at least, by providing a supply of dry ice around 9 p.m. As of 9 a.m. Monday, power had not yet been restored. Winds, which had been remarkably light during the day, picked up dramatically in the late afternoon and throughout the evening hours, once again raising concerns about the possibility of downed tress and further power losses.
Photos by M. Turton 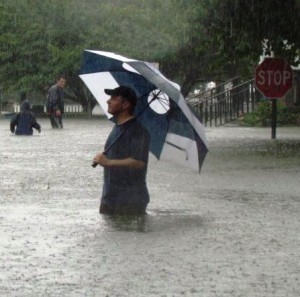 Indication of flood water levels below the tracks in Cold Spring 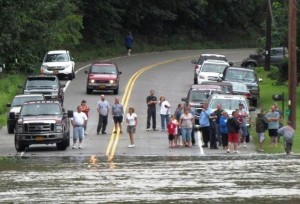 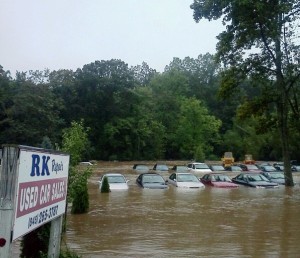 4 thoughts on “Some of Irene's Local Back Story”