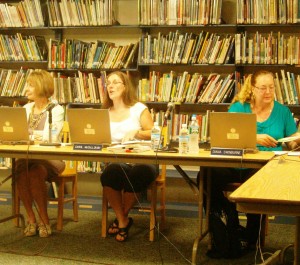 At the Aug. 24 board meeting, Garrison School Superintendent Gloria Colucci gave trustees an unofficial report on student performance on recent state-wide assessment tests. Consisting of the English Language Arts (ELA), and math, the tests represent a snap-shot of current student abilities and are also looked to as an indication of future academic success. “All tests had more writing . . . it was challenging for students,” said Colucci. In general, she said, scores were “as expected” and in some cases “better than expected.”
With the caveat that the test results were preliminary, and that she would give a formal report in November, Colucci said that in grades 3-8, consisting of 180 students overall, only 1 percent scored in level 1 (the lowest level) in the ELA, while 18 percent scored in level 2. This is not a huge number . . . and was expected, said Colucci. While a full analysis has not been completed, Colucci said that the board was aware the new cut scores [the dividing line between test levels] were likely to cause more students to fall into level 2. 73 percent of students scored in level 3 and 8 percent in level 4 (the highest level). Math assessment scores trended in a similar fashion with 2 percent scoring in level 1; 16 percent in level 2; 38 percent in level 3; and 44 percent in level 4.
Of the 14 students taking the forth grade science assessment, 21 percent scored in level 3 and 79 percent in level 4. Likewise for the 29 students taking the eighth grade science assessment, 29 percent scored in level 3 and 66 percent in level 4. Grade 8 students taking the algebra Regents exam all passed with 13 percent scoring between 65-79 and the balance (87 percent) scoring 80 or higher.
The New York State Education Department (NYSED) recently revamped its assessment procedures to more accurately predict future success and identify student problems earlier. Toward this end, the state-wide assessment cut scores have been raised to more accurately reflect proficiency. (See State Education Department Adjusts Assessment Cut Scores. )  The assessment tests place students into one of four levels: 1- not proficient, 2- partially proficient, 3- proficient and 4-more than proficient. Those scoring on levels 1 and 2 are required to receive Academic Intervention Services (AIS.)  Under the new criteria, students must achieve a minimum score of 680 (up from 650) to be proficient. This change has increased the number of students determined to be partially proficient and in need of AIS.
Photo by M. Mell