Thomas Huber, in front of his work

As Thomas Huber describes it, a viewer of his paintings needs to change the focus of the eye, navigating and traveling around the piece reading it as well as looking at it. That mirrors what he is doing in creating each work. Huber, whose work is being exhibited at Cold Spring’s Concrete Gallery, builds his paintings in an improvisatory process, with each step a reaction to the previous one. I let them evolve and tell me what to do. I try not to have an idea of where it will wind up, although it is sometimes hard not to do that.  Huber says he calls his works paintings reluctantly.  The collage elements found in all of them consist of elements found in my daily life, or things that are given to me. By putting them in to these pictures the context changes they’re stories that are being created between the words and the images. 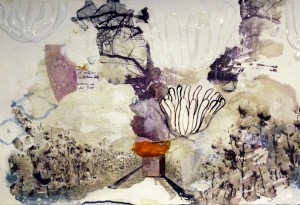 His overall aesthetic is also a product of evolution, as his early work started off in an entirely different vein. Born in Buffalo, Huber knew early on what he felt compelled to do, I think I could have told you I wanted to be an artist by 12 or 13. Now I see that it was my way of making sense of the world.  After attending the School of Visual Arts in New York City, Huber became involved in the 80s East Village performance art scene, where he dabbled in music (in a band called The House of Pork) as well as art, with the art eventually taking precedence again. His work at that time was far more conceptual, and political. Then I began just making paintings without actually painting. I used a lot of my own writing within the piece, but I came to realize that the letters, notes and scraps that I was incorporating were actually more interesting than what I was writing. I liked the anonymous aspect of it being out of context. Smiling, Huber recalls my favorite insult: someone looked at my work and said I like the stuff on my studio floor too, but I don’t hang it on the walls. 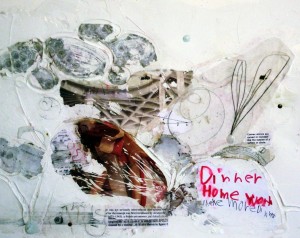 Over the past 10 years, Huber has been doing a great deal of painting, initially backtracking from his early bent, my first work was a reaction to the didactic political work of the 80s, which I was mimicking.  Now it’s up to you [the viewer] to figure it out for yourself.  With this new group of works on paper, he has tried to simplify his process: I was doing paintings with collage in them, and I decided to separate it and do work on paper which incorporates more of my own hand. Present in all of the work, says Huber, is reproduction, cellular imagery, dividing and inter-connectedness  in the painting. I’m always trying to balance these various things. Citing his major influences as Sigmar Polke, a German painter who just passed away, and perhaps Robert Rauschenberg.  Huber is pleased that his work often appeals to people not usually interested in contemporary art. I’m always touched when people not involved in the art world respond to my work.  People either dismiss it [the work] right away or they dive into it.  It’s slow, and isn’t usually an immediate response. 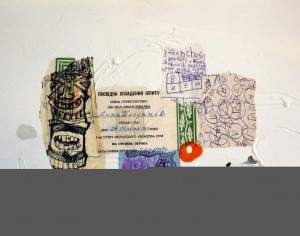 Concrete Gallery owner Linda Stewart admitted that she didn’t immediately get Huber’s work, saying that she came to understand and appreciate it more as she got to know him over the years. Both Stewart and Huber work as art handlers, packaging, transporting and hanging art works, sometimes together. Stewart came to the realization that, I knew he looked at a 100 million different things at the same time. Addressing Huber, she noted, “You see a whole bunch of things, that’s how you see things.  Looking down the street you see 25 things there where we would see five. You’re not editing, you’re freeform.”
Huber, who moved up with his wife, artist Sarah Gurland, from the city to Nelsonville 11 years ago (they have a son, Curtis, just starting fourth grade), is full of praise for the artistic community in Philipstown and Beacon, it’s a community that works together. In the city I found people more competitive and secretive. Up here it feels like people work together. Initially exhibiting at the Pacifico Gallery, while living in the city, Huber’s work was frequently shown by the Van Brunt Gallery during its long tenure in Beacon. Over the past two years, Huber’s work has been included in exhibits at Papercity Studios in Holyoke, Mass., at the Woodstock Artists Association and Museum, Binghamton’s Rosefsky Gallery, and at the Hudson Opera House. 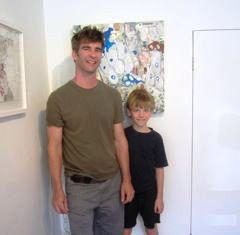 Huber and his son Curtis

Stewart feels that same community support for her new gallery both from locals and also from artists living in Beacon. Creative people like to live near creative people, she reflected. So much support is out there, in fact, that although they expected a very sparse crowd at the opening reception last Saturday night (July 27) due to the impending hurricane, in fact, the place was packed.  Still, there were some who were unable to make the trip, and because of this, a second artist’s reception will take place on Saturday, Sept.3 (the day this story is posted), from 5 to 8 p.m. at the Gallery, which is located at 137 Main Street.  Concrete Gallery is open Saturdays and Sundays, from 11 a.m. to 6 p.m.
Concrete Gallery, which operates seasonally continues its two-week-long exhibits on Sept. 10 with a show of works by Rick Thurston, followed by works from Susan English on Sept. 24. A group show featuring works by all of the artists who have had shows since the gallery’s opening in June, and a season closing party cap things off on Oct. 8. For more details, visit https://www.facebook.com/pages/Concrete-Gallery/217973521568984?sk=info/. For more background on Thomas Huber, and to see a collection of images of his work, visit his website, http://www.thomashuberart.com /.
In lieu of an artist’s statement, Huber has found that the eloquent words of William Carlos Williams serve his artworks well: We crave certainty; we love to put a period at the end of a sentence, and that is that.  But take a close look at people, a real close look, and you’ll find inconsistencies and contradictions and that’s where a closer look is needed, not a category or a definition that tells you, that reassures you: all right, you’ve got it!  The closer you look, the more one picture turns into two and three and four and more.
Photos by A. Rooney