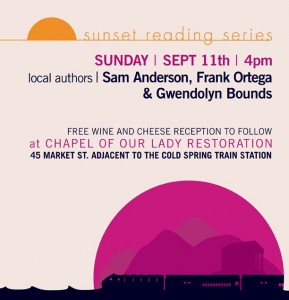 In a reprise of a popular event last year, the Sunset Reading Series at the Chapel Restoration has invited three local writers to read from their works.  Some of what’s read will reflect on the date of the reading: September 11, 2011 — the anniversary of the tragic events of a decade prior.  Cold Spring, Garrison and Beacon will be represented by the trio of authors featured this year. 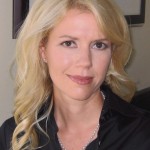 Gwendolyn Bounds chronicled her post- September 11 experiences at the beloved and now-gone Irish pub Guinan’s in her non-fiction book, Little Chapel on the River, published in 2005. Bounds is a writer for The Wall Street Journal and anchor of the noon news and lifestyle show WSJ Lunch Break on www.wsj.com. She can often be found wielding a chainsaw, weed-whacker or maul while reporting her first-person column called “About the House.” Bounds is an on-air contributor to ABC News and a speaker and moderator of panels on environmental issues, entrepreneurship and the arts. She is a native of North Carolina and graduate of the University of North Carolina at Chapel Hill. Bounds currently lives in Garrison and is an officer of the board of trustees for the Putnam County Historical Society & Foundry School Museum. 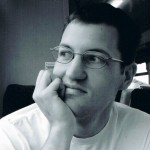 Sam Anderson is currently Critic at Large for The New York Times Magazine. He was formerly the book critic at New York Magazine, where he won the National Book Critics Circle’s Balakian Citation for Excellence in Reviewing. His work has also appeared in Slate, The Paris Review, The American Scholar, Creative Nonfiction, The Oxford American and The Best Technology Writing 2010. He lives in Beacon and posts the best sentence he reads every day at twitter.com/shamblanderson. 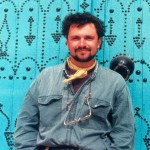 Frank Ortega is a poet, essayist and teacher. Ortega has had work published by The Madison Review, Colorado Review, Ferro-Botanica, Seneca Review, Z Miscellaneous, Downtown, Amicus Journal, Paragraph, and Oberon as well as by Lost Horse Press in I Go to the Ruined Place, an anthology of human rights poetry. He has been awarded writing residencies at the MacDowell Colony, Edward F. Albee Foundation, Karolyi Foundation (France), Dorland Mountain Colony and Millay Colony for the Arts, and a Poetry Fellowship from the New York Foundation for the Arts.  He has read in New York City at the Poetry Society of America, Knitting Factory, New York Public Library, Brecht Forum, CB’s 313, and Barrow Street Poets. He was awarded a working scholarship to attend the Bread Loaf Writers‘ Conference in Vermont and recently received a performance grant from Poets & Writers, Inc. In March of 2010 he was invited to London as a Commendation Winner in the annual contest sponsored by The Poetry Society of the United Kingdom and in August was awarded a writing residency at the Jentel Foundation in Wyoming.  Ortega lives in Cold Spring.

The reading takes place at 4 p.m. and is free of charge. A wine and cheese reception follows. Free parking is available at the adjacent Metro-North parking lot. For more information please go to www.sunsetreadings.org.