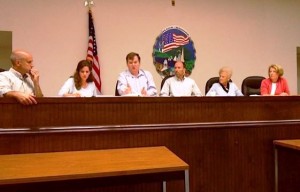 The Federal Emergency Management Agency (FEMA) has declared Putnam County a “disaster area” clearing the way for federal aid to the Town of Philipstown government as well as homeowners and local businesses.  Funds could be available for town road and infrastructure repair and for those private citizens with significant property damage directly related to the storm. The disaster declaration doesn’t guarantee funding for every need, but makes it clear that FEMA regards the county and in particular, Philipstown, as an area in need of federal assistance under its guidelines.

According to Philipstown Supervisor, Richard Shea, FEMA will establish its county disaster relief center (DRC) in Philipstown, which will provide easy access for locals to meet with FEMA officials to further their claims for relief from storm expenses.  The expected location for the DRC is the North Highlands Fire Company with FEMA likely bringing specially equipped trailers for the operation. A number of Philipstown residents and businesses experienced significant damage during Hurricane Irene with many people either forced from their homes or having to live under adverse conditions.  Many area roads, especially dirt roads, require extensive repair and storm mitigation to try and prevent similar damage during the next storm.  Shea has said the costs locally are in the several million-dollar range.

The extent of local area damage was evident last Wednesday evening, Sept. 7 with residents and business owners filling the Town Hall meeting room to standing room only capacity to listen to the town board and Tom Lannon, director of the Putnam County Bureau of Emergency Services, discuss storm related issues and answer questions.  (CLICK HERE FOR A SHORT VIDEO OF TOM LANNON.) At that time Lannon and Shea were optimistic about the disaster declaration but did not yet know for sure if it was coming. Shea said then he believed the full court press of town and county officials and the intervention of U.S. Senators Schumer (who personally visited Philipstown) and Gillibrand (who sent an aide) persuaded FEMA to look closely at the area’s damages and should lead to the agency making the declaration.  “We’ve seen things we never thought we see here,” said Shea.

Lannon, who along with Shea, had already met with many in the meeting audience, advised people to begin making repairs on their homes and buildings if they can, but to take pictures and keep good records of damages, timelines and costs of any work done to make the best possible case to FEMA.  “The biggest reason people get denied is their paperwork is wrong,” said Lannon. He urged people to resubmit claims at least twice if they experience a denial. “FEMA does want to help”¦they want to give you money, so keep trying,” he said.

Lannon explained FEMA has two main categories of aid: public and individual assistance. The public is for the local government’s needs and is coordinated with the state government to establish the level of aid and the scope of projects initiated.  He said he was “100 percent sure there will be funding for roads,” given the conditions he had and FEMA people had already seen.  Lannon and Shea agreed it would take months to fund, develop and execute repairs to some of the roads, especially the dirt or historic roads. Old Albany Post Road down near the intersection with Sprout Brook Road was singled out as a particularly difficult fix.  “That’s a big job. I was down there with the county engineer and he didn’t even know how to do it.”  Lannon said the county would take responsibility for the Mill Road Bridge off Route 9 at the northern end of the town, which he estimated would take three months and $3.5 million dollars.  That comment earned him a pat on the back from Shea. Lannon also pointed out that while a disaster designation would also help funding for business losses and repairs, the application process will go through FEMA to the federal Small Business Administration. 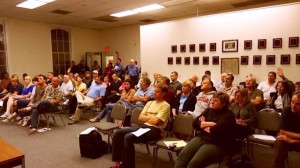 Audience members had many questions during the 90-minute meeting, ranging geographically from the Hudson River shoreline to the back roads of Continental Village and covering issues such as preventing future river and stream flooding as well as clearing existing blockages in streams, repairing and rebuilding bridges and private road embankments, help with basement water damage, the tar issue under the Cold Spring Boat Club, and the safety of local dams. Shea and Lannon said that prevention efforts against future flooding would be part of FEMA’s consideration of overall public aid. He said people along the Hudson should look for help raising their houses rather than expect the river to be held back.  He said he would get the county Health Department involved with assessing the long-standing tar issue at the boat club. He also said the state Department of Environmental Conservation (DEC) was responsible for overseeing any clearance and repairs to streams as well for the inspection of dams and that they would be a part of the process for developing plans and obtaining FEMA funding.

Shea urged residents not to go into streams to clear them or otherwise take unnecessary risks to correct conditions, but rather report them and be patient about the response. “They [FEMA] want you to do a permanent fix or you’re not eligible for money the next time. This is an opportunity to look at the most serious conditions,” Shea said. “We need to consider long-term, permanent solutions, we can’t keep watching all the fill on the roads pour into the stream beds.”  Shea said he was considering organizing a roads committee, not to debate the merits of the historic/dirt road issue, but to take a close look at perennial problems and have a discussion about the best ways to spend taxpayer dollars. “We are a small town with limited resources, we have to work with FEMA to see what we can do,” he said.

Both Shea and Lannon said they would continue to work together and with other officials to make sure each issue raised at the meeting was addressed.  Lannon urged people to call his office (845-808-4000) in Carmel if he could be of help.  The meeting, which was a calm and sober dialogue throughout, ended with applause for the town board and Lannon as well as for the emergency first responders from the local fire and ambulance companies.
Photos & Lannon video by K.E. Foley