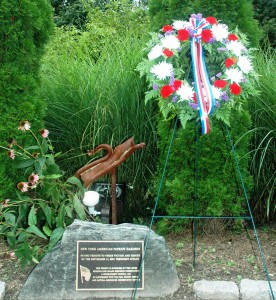 With long “moments” of silence as the St. Mary’s church bell tolled softly in the distance, striking once for each victim of terrorism on Sept. 11, 2001, over 100 residents of all ages gathered in Cold Spring Sunday morning to mark the 10th anniversary of the attack. They gathered around the 9/11 memorial in McConville Park, which includes a hunk of twisted metal from the World Trade Center ruins. The event included no real speeches, despite the presence of elected officials, but featured brief recognition of the various groups slain ““ passengers on the planes turned into bombs on 9/11, military personnel at the Pentagon, police and firefighters who responded at what became Ground Zero, among others ““ placement of a wreath by the Cold Spring Fire Company, and the melancholy tune of a single flute. Philipstown residents of all ages, from tiny children to aged Armed Forces veterans, turned out,  accompanied by  the mayor, county sheriff and county executive, members of town and village boards, county legislator, state assemblywoman, state senator, and others, in a somber, low-key,  bipartisan commemoration.
Photos by L.S. Armstrong