Will Simone is now among the most elite of the Boy Scouts of America. Simone was inducted as an Eagle Scout on Sept. 10 at a ceremony held at the Garrison Fish and Game Club. Only about one percent of boys who go into scouting achieve that highest rank. Simone is the 8th Eagle Scout associated with Troop 437 Philipstown. Simone’s Eagle Scout project was especially appropriate given the date that he was sworn in. Over the course of six months of planning and construction, he refurbished the walkway and added a wheelchair ramp and a small area for wheelchairs at the Sept.11 memorial at Graymoor, home of the Franciscan Sisters and Friars of the Atonement in Garrison. He also took part in 10th anniversary ceremonies held at the memorial on the evening of Sept.11.

A large contingent of fellow Scouts were on hand

The Fish And Game club was packed with well-wishers during the ceremony emceed by HudsonValley storyteller Jonathan Kruk – himself an Eagle Scout. Certificates of recognition were also presented to Simone on behalf of New York State Assemblywoman Sandy Galef and by Putnam County Legislator Vinny Tamagna, Putnam County Undersheriff Peter Convery, the Town of Philipstown and Jamie Copeland, president of the Garrison Volunteer Fire Company (GVFC), assisted by Bill Rimm, an Assistant Chief with GVFC. In lauding Simone’s efforts, Tamagna addressed the many younger scouts in attendance. “You are our future leaders. I hope you will be inspired by this example of leadership.” Philipstown Town Supervisor Richard Shea praised Simone’s perseverance in becoming one of the very few who make Eagle Scout. “We give out a lot of certificates in Philipstown – but very few of these,” he said.

Will’s father, Chris Simone, also an Eagle Scout and an active member of GVFC, tied the Eagle Scout scarf around his son’s neck. “I’m very proud both as a father and a scout master. I hope Will will inspire others in the troop,” he said.  It appears that will be the case as the younger Simone will be staying on as an adult leader. Simone was presented with his Eagle Scout badge by Scout Master Joe Platt.  Simone then turned the tables somewhat when he presented both his parents with a pin to mark the occasion.
The most poignant comments at the ceremony came from Rimm. “The 9/11 memorial that Will worked so hard to improve has special meaning to me and all firefighters. Some people go there to mourn, to grieve, to reflect. But for firefighters that memorial is an inspiration,” he said.  “Mixed in the ash and cement that hold it together are the remains of the first responders at ground zero. Those guys did on that day, what firefighters are called to do,  and what you are called to do as an Eagle Scout; to serve and help others in a time of need, even when it’s dangerous. I’m really proud of Will for taking on this special project because now more people can enjoy that site”¦They will reflect and remember that there weren’t just victims that day – there were also heroes. Thank you, Will.” 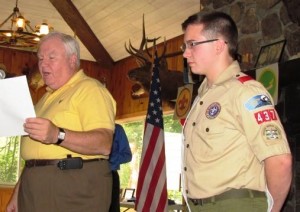 Simone said that he was inspired by the other Eagle Scouts he met at the Curtis S. Read Scout Reservation located in Adirondack State Park, where he worked on staff. “They motivated me. So did my dad, ” he said. The 18 year-old Simone is enrolled at SUNY New Paltz. He is keeping his options open and has not yet selected a distinct career path. “I look forward to many new opportunities,” he said.
Photos by M. Turton

One thought on “Will Simone Earns Rank of Eagle Scout”