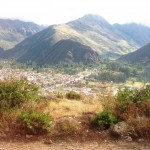 Over the course of the sweltering month of July, I had the unique opportunity to escape the Hudson Valley heat and travel to the snowcapped peaks of the Andes mountains and down into the sacred valleys of Peru.

Once there, I planned to contribute to various community service projects and experience authentic Peruvian culture.  The country is currently in its winter season, but fortunately is nothing like our cold snowy climate. Surprisingly, the only reason the gargantuan mountains had snow on them at all was because it had been raining a week preceding my arrival and continued in chilly deluges for another week after.

Rain is a phenomenon practically unheard of in Peru this time of year. The months of April to October are Peru’s annual dry season when rainfall ceases and farmers rely solely on irrigation systems to supply water. Because of the uncharacteristic torrents, many essential canals that network the mountains and transport water to the vast quilt-like fields of crops were damaged or destroyed.

As devastating as these events were, they gave my trip a heightened sense of purpose.  My primary goal had been to build and finish a preschool in the rustic Peruvian town of Urquillos with other volunteers and residents. We now had an equally, if not more important job: to rebuild the canal system.  The Peruvians held a literal ground breaking ceremony giving back to Mother Earth, or Pacha Mama as they call her, by burying an organic offering of leaves, grain, and other articles of people’s livelihood. They hoped Pacha Mama would grant permission for construction and that the spirits of the earth would offer their protection to the workers. As well, they also asked for forgiveness.

The people believe they had offended the earth in some way, perhaps by war or the riots over the recent political turmoil plaguing their society. According to common opinion, their infringements against the well-being of the earth are what caused the excess rainfall and consequential damage to the irrigation infrastructure. Whether it was Pacha Mama or not, my group and I, part of the Visions program, successfully built the preschool and restored many of the canals to perfect condition. 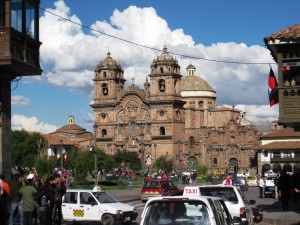 A main plaza in Cusco

Reverence for the land

I was in awe of the Peruvian’s reverence for the land.  The elders especially radiate a sense of respect and virtue regarding the earth. They place pieces of food and drink in the soil before they eat as gifts to the earth, thanking her for their meals. However, the amount of trash I found while cleaning out one of the unusable canals was extremely ironic. In any case, it was incredibly moving to be included in a ceremony that has been in existence since the times of the ancient Incan peoples.  It transported me to a time when the world was undeveloped and the love for the land was a genuine connection placed above any human necessity.

Many of the elders of Urquillos continue speaking the Quechua language, the language of the Incas, today.

Allillanchu? they’d ask me (Hi, how are you?)

Allillami, I’d reply (I’m well, thank you.)  The spelling of these words is open to interpretation because the Incas had no written language.

Everyone has a very traditional and effective way of living. The ancestral lessons are evident in the everyday lives of the Urquillos people: from the way they prepare their food with a rapid chopping technique to a method of warding off flies with a plant that grows on the sides of their fields (and it really did keep them away, much to the embarrassment of my group with our noxious, toxic bug sprays.) 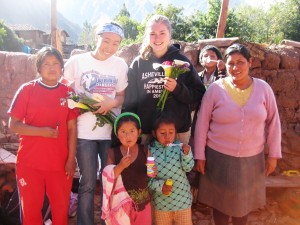 Daily life
I was humbled and inspired by the Peruvians living their lives in utter poverty, but with complete contentment and happiness. My host family had nine children, all of whom have to walk an hour to and from school everyday with the exception of those who are young enough to attend the new preschool in the immediate vicinity.  I carp about having to take two buses to school every morning.

After coming home from a day at school, the children willingly go out to their family’s fields and begin plowing, weeding, planting, and tending to their source of income for hours in the hot, dry sun intensified by the altitude of the town. Next the children clean and feed the livestock and then of course, homework is to be completed.

If any child wants to use a computer or watch television, it’s another hour walk into the town of Urubamba. The amount of responsibility the children have is tremendous compared to the youth of the United States. A four year-old child in Peru would have the same responsibility of a twelve or thirteen year-old here in America.  Not once, in my entire time with them, did I ever hear one child complain.

More than familial ties, the sense of community is astounding.  Women and children often visit neighboring homes for meals and make clothing for each others’ families.  The men sit together during the workday and drink Chicha, an alcoholic beverage made from fermented corn. Peruvians rely heavily on each other to maintain their lives. To them, everyone is family whether you are related or not.

People help and guide one another without a second thought. I was welcomed into a family of people I’d never met before because I was willing to help them and make their lives easier as best I could. Needless to say, I was much less skilled than they were and evoked a few laughs from the women because of the inefficiency of my cooking, which came across as incompetence. How was I supposed to tell them I have a potato peeler back home and don’t have to use a blunt piece of metal to skin my vegetables? 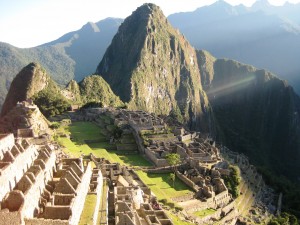 Machu Picchu
Of course, the trip wasn’t all work, though a vast majority did consist of it.  I got the opportunity to explore the scenic cultural sites of Peru as well. I backpacked at 3 a.m. up the side of a mountain to Machu Picchu, a 15th century pre-Colombian Incan city 8,000 feet above sea level.  The city was absolutely breathtaking.

Just the precision and calculations that must have gone into it’s planning are impressive in and of themselves, but the sheer magnificence of the place as a whole, with its temples and towers, sun dials and terraces are a sight one doesn’t soon forget, or ever forget for that matter. I was fortunate enough to reach the summit right before sunrise.

I watched silently as the light trickled slowly across the ancient stone walls and glinted off astronomical pools until the entire mountaintop was illuminated in sparking golden luminescence. Yes, Machu Picchu does look like the pictures on Google, but nothing compares to standing on top of its terraces, watching the city come to life.

Urubamba
I lived mostly in Urubamba, a small city about an hour from Cusco in the Sacred Valley of the Inca.  It has its name because it is one of the few flat places fertile enough for crop building in Peru. Much of the time, farmers rely on terrace farming, where ledges are cut into the sides of the sun dappled mountains, for the bulk of their produce. Urubamba is a bustling place full of vendors under blue canvas umbrellas, sitting on mats selling exotic and familiar vegetables and fruits.

There was colorful clothing hung from windows peeking over adobe walls; home to cacti and flowers. Stray dogs wander the streets searching imploringly for a shred of food. Poller­as and internet cafe’s line the streets with brightly colored signs and advertisements. A week’s worth of groceries there, for 32 people, cost only $40. The place is hospitable and full of activity from fire works to school pride parades full of dancing children in vibrant, shimmering costumes. 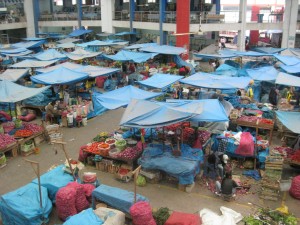 My house, on the outskirts of Urubamba, was quaint to say the most. It wasn’t heated, the showers were always cold, the bathrooms were outside, and my water never came from a sink. I was living in an up-scale house, one considered luxurious by many Peruvians. There are hotels and resorts in Peru. In fact, I drove past an incredibly opulent one every day on my way to Urquillos.

Originally, these establishments made me angry. So much wealthy lavishness next to an excess of poverty was disturbing. While they may be discomforting in their proximity, the resorts do create job opportunities for the locals and attract tourists which betters the overall economy. I also found it upsetting that the cities of Peru contain many modern amenities that some villages lack all together. At night, the streets in Urubamba are lit so brightly; it seems as if there is still daylight even though the sky is black. Traveling a short distance from the city limits, every street is plunged into darkness.

Peru holds some of the prettiest panoramas I’ve ever seen in my entire 16 years. The mountainous terrain alone was enough to make the trip worthwhile. I hope someday to go back.  I’d love to bring my family there and show them where I was and what I experienced. I want to visit the people I met in Urquillos again, the children making something of their lives and all grown up.  As Urquillos president, Jaime Castillo, said before we left, “We are all Americans, and it is nice to see us working together, side by side.”

I sincerely hope the Peruvian people hold onto their traditions and continue to value their culture. I still want to see the signature brightly colored, Inca patterned cloth wrapped around peoples’ backs as I walk down the streets of Urubamba and the turquoise, pearl, and silver jewelry draped around women’s necks when I shop in Pisaq or Cusco.  It was magical to be able to experience pure simplicity and delve into another world and another lifestyle so different from my own where farming, cooking, and cleaning comprise the day-to-day existence. It gave new meaning to the saying, “ignorance is bliss.”  Perhaps in the future the lives of Peruvians will be easier and healthier. All I ask is that they essentially remain who they are and remember where they came from.

Lindy Labriola is a junior at Haldane High School.

What Type of Story is This?
News Based on facts, either observed and verified directly by the reporter, or reported and verified from knowledgeable sources.
See explanation.

4 thoughts on “A Month in Peru”