Sept. 25 will be no ordinary Sunday at the Depot Theatre, as Sondheim Unplugged makes its north of the city debut, taking a sojourn from its usual home on Theatre Row Off-Broadway. Conceived, produced and hosted by very recent Garrison transplant Phil Geoffrey Bond, Sondheim Unplugged gives local audiences an opportunity to hear the music and lyrics of the contemporary American musical theater master in rare setting: an intimate space where the nuances of the astute lyrics and the complexity of the music can be appreciated in a context different to the usual larger-scale staged productions. Four singers, amongst them Sarah Rice, the original Johanna in Sweeney Todd, will perform a range of songs dating from throughout Sondheim’s career, accompanied solely by musical director Ray Fellman on piano.  Interspersed throughout the evening will be video clips and photographs from productions and an engaging commentary, filled with Sondheim-related anecdotes and a dash of backstage gossip, from Bond. 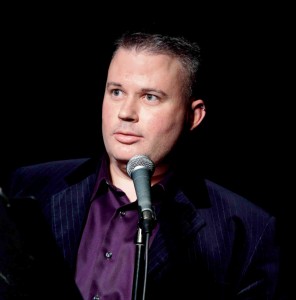 Sondheim Unplugged has been playing to packed houses at the Laurie Beechman Theatre in New York City for over a year now, attracting the Sondheim faithful to its once-a-month performances, with their constantly changing line-up of singers and songs.

The idea came to Bond amidst the many celebrations of Sondheim’s 80th birthday in March, 2010.  After attending a starry benefit birthday concert at City Center, which was very grand, great, but I thought what if we boiled everything down to just lyrics” it would force audiences to hone in on the lyrics, unadorned.

As director of programming at the Beechman, and, before that at the Duplex Cabaret Theatre in Greenwich Village, Bond, a six-time Manhattan Association of Cabarets (MAC ) winner, had regularly been producing evenings featuring Broadway and cabaret luminaries, and thus had a great pool of talent to dip into. The very first show unexpectedly sold out, and what was expected to have been simply a summer series is still going strong, 14 months later.

Bond and his partner, Dallas Belk (who runs the Apple Store near Lincoln Center and deals with Macs of an entirely different stripe) moved to Garrison just this past June, after a friend, Donna Lynne Champlin (another Broadway Sondheim cast member, who portrayed Pirelli in the 2005 revival of Sweeney Todd) introduced him to the Philipstown area and he was bowled over by its natural beauty and close proximity to the city. Looking at Garrison’s Landing for the first time, magic struck, or, to throw in a little Sondheim here, something is stirring, shifting ground “It’s just begun!” (from Merrily We Roll Along), Bond flashed back to his past, I watched Hello Dolly every day after school when I was eight. I saw that gazebo and said “We’re moving here! Done!’  And so they did.

Charmed by the exterior and interior of the Depot Theatre, Bond proposed bringing Sondheim Unplugged to the theatre for an inaugural performance in what he hopes will become a six-part series entitled Cabaret in the Country. If local audiences fill the Theatre and respond well, more of the same will follow. There has already been a spin-off, Simply Streisand, which follows the same overall concept, at the Beechman. The city shows have 8 to 10 singers, while this streamlined version will allow each singer more than one song each.
Along with special guest Sarah Rice, who has performed in Sondheim Unplugged many times and whose extensive post-Sweeney career has included many operatic and theatrical soprano roles — and whom Bond met sitting next to her at the Algonquin — performers who will be singing at the Depot are:

Bond grew up in Indiana, one of those kids who navigate their way to musical theater without a compass, “I learned all the Sondheim scores through headphones.  I had to special order them because the local stores didn’t have them.”  He was active in school and community theater there, appearing in “probably 80 to 90 shows,” displaying a knack for not getting cast as any particular type, with roles ranging from Jack in Into the Woods to Motel the Tailor in Fiddler on the Roof to the Burgermeister in The Visit. At 18 he headed for his mecca, New York, earning a BFA in acting and dramatic writing from NYU’s Tisch School for the Arts.

The trajectory of his working life included stints as a theatrical publicist and as an assistant producer at Disney, where he opened the Los Angeles and Japan companies of Lion King.  He then took time off and headed to Europe, before returning to New York and producing again, this time at The Duplex, where he spent five years.  His work there included a series called New Mondays where he presented music from the newest generation of musical composers, including Jason Robert Brown and Michael John LaChiusa. Bond is about to take the reins of another performance space in the city, but as of this writing was unable — though eager to — reveal the details of his new position. 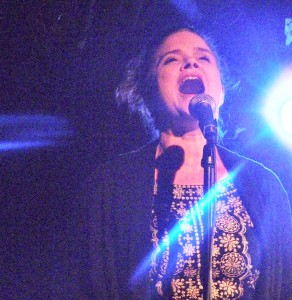 While at the Duplex, Bond sometimes presented artists who normally played higher end supper clubs and rooms such as the Caf Carlyle, but who wanted a change of pace and wanted to do a show at a place their friends could afford.  Bond sees the potential for presenting more shows at the Depot similarly — a more casual venue where performers preparing for city engagements can come and really feel an audience’s response, shaping the material accordingly.

As for the centerpiece of this first show in Garrison — the music of Sondheim — Bond says, “Hearing Sondheim forced me to totally rethink the way I think about theater. No one does what he does; you can’t compare him to anyone else. He takes the conventions of Rodgers and Hammerstein, Sammy Cahn “¦ and turns it on its head and makes it his. People can learn a lot from him about respecting the past and forging your own individual voice.”

Has Sondheim come to see any of the Unplugged evenings?  Bond says, “No, but he knows about them.  A mutual friend called him right after coming to see it, so I know he knows.  Of course he’s invited!  I’d be nervous, but thrilled.”

Tickets for Sondheim Unplugged cost $20 and may be reserved through brownpapertickets.com, or by calling the Depot at 845-424-3900. The performance begins at 7 p.m.

Photos by Maryann Lopinto, except photo of Phil Geoffrey Bond, by Stephen Sorokoff