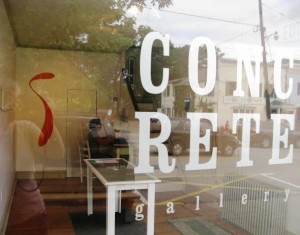 “A clear vision and the means to express it”

The Hudson Valley is filled with many working artists; Susan English is one of the few with a clear vision and the means to express it. Her current show at Concrete Gallery, the small pop-up gallery on Main Street, in Cold Spring, draws on territory well-traveled by English and then skillfully and playfully explores new possibilities and areas of interest. For several years now, English has moved away from the physical constraints of stretched canvas, a support that lends itself best to the rectangle, the square and the tondo. Instead, she has chosen to paint on MDF [Medium Density Fiberboard] panel, a material far more conducive to the arabesque cuts she employs to create forms not so unlike Matisse’s jazz influenced cutouts that allowed for the immediacy of drawing while cutting through color to create form.

In this small show, English presents us four uniquely different aspects of her work that, while visually related, are conceptually distinct. The largest work on exhibition, titled L-Squares, is a series of six painting all based on the 9” square. In each panel the artist has cut arabesque forms from two intersecting sides, thus leaving the remaining two sides to form an L, hence the name of the series. She then attached the cut sections with their straight outer edges and curved interiors to the two remaining edges that form the L. This creates a highly animated shape that is cartoon-like in its inability to remain static on the wall. Hung together in a horizonal line, the panels, each now a uniquely different shape but all based on the same 9 inch root, create a language that is intelligently playful, referencing the seriality of pop and the austerity of minimalism, while poking fun at a world all too consumed by its digital addiction. 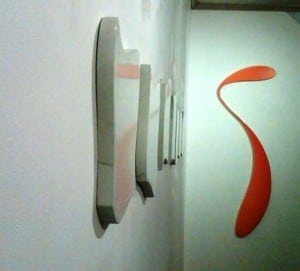 Two other works from the exhibition are titled Pieces of the Sky. These works, similar in construction to the L-Squares, have a very different feel about them as singular rather than serial works. The title, based on an Emmy Lou Harris album of the same title, along with the color palette chosen by the artist are meant to evoke the ever shifting nature and color of the sky – in this case a ethereal blue to a brooding dark purple. Looking at them you get the uneasy sense that they are either pieces lost from a very large puzzle or one of thousands of monochrome pieces that might fit together to from a single atmospheric entity that is elusive and ever changing. In this sense they speak to a core human existential need for wholeness and acceptance. Physiologically they are interesting because they analogize how we divide up the real world into digestible bits that are intuitive and extremely personal.

The fourth work, Spoon #3, is a sinuous hourglass-like form that looks like it has been tenuously blown out of a child’s dime store bubble hoop. The work was made or rather extracted from a more neutral form such a square or rectangle. It is interesting to note that while the other works were created from the inside out; this work is created from the outside in. The form has an uncanny ability to dominate the space by not laying claim to any one area of it, like the little blob of mercury the dentist used to hand out that would roll around in the palm of your hand, splitting up and rejoining magically as if it had a mind of its own. The color of this work is bright orange, distinguishing it from both the more naturalistic colors of the sky pieces and pale gray/blue/green of the L-Series. The paint is applied in all cases by pouring multiple layers of tinted polymer on the surface, giving it a slick, glassy look that would almost seem industrial if it were not for the beauty of English’s palette and the sensuous drips and varying levels of transparency and saturation that occurs as she moves the paint across the surface by tilting the support during the drying process.

The final work in the exhibition, and by no means the least, is large graphite on vellum drawing titled Noise of Wings. English has an extraordinary facility of line that she translates beautifully into the works on panel, but to see it unencumbered by the materiality of convention is to witness first-hand an essential act in the creative process where the mind and body are still one.

Eric Stark is the Curator of the New School Art Collection