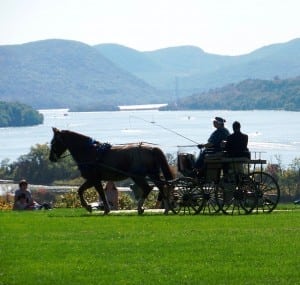 As horse-pulled carriages, wagons and phaetons lined the circular driveway in front of the Federalist home at Boscobel last Sunday, Oct. 9, it was easy to feel transported back to another century. Perfectly complementing Boscobel’s elegant bearing and position overlooking the Hudson, the carriages, some very much of the gilded age, others picturesquely rustic, were put to the test as they were “driven” by members of the Mid-Hudson Drivers Association (MHDA) in a display of skills evoking eras past. 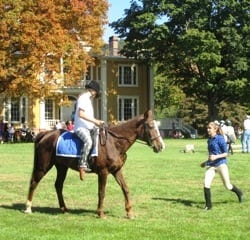 Now in its eighth year at Boscobel, Horse and Carriage Day features a display of driving, replete with prize winners, followed by a demonstration of riding and jumping skills by the Red Horse Drill Team (students from Garrison’s Leona Dushin’s riding school,) who formed a pony drill team for the day. Throughout the beautiful day visitors to Boscobel could ride around the grounds in a horse-driven wagon and many picnicked along the perimeter of the grassy area in front of the house.

The Mid-Hudson Driving Association was formed in 1974 by group bound by their affinity for what they enjoy doing. Surprised, at first, to discover fellow enthusiasts, they now participate in a mixture of socializing activities such as picnic drives on farms, pleasure drives, and competitive events, all over both sides of the Hudson. Many of the 100 or so members are involved in collecting and restoring antique horse-drawn vehicles. The club also offers clinics where members help those just starting out with advice on obtaining parts, fitting the harnesses correctly, etc. According to MHDA treasurer and founding member Eunice Shumalski, one of the day’s judges, the club’s mission is inclusive, and there’s a cross-section of the “well-to-do and some not so fancy,” beginners and experienced alike. 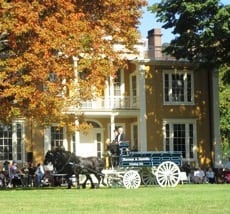 Carriage rides for the visitors, too, around Boscobel

According to the MHDA website, the goals at the time of founding were to “have a place to exchange ideas, equipment and inspiration. The specific focus was to be on pleasure driving, carriage collection and restoration, parades and cavalcades, picnic drives, show driving, harness drill teams, combined driving events, roadstering and anything else that related to driving that anyone can think of. The overall focus was to be on fun — the enjoyment of the great sport of driving, which can be shared by people of all degrees of expertise and experience. These original goals have not changed, but new ones are being realized.”

In opening remarks to the crowd, it was noted that the “horse and buggy era” in these parts didn’t last all that long, beginning in about 1870 with pleasure driving when the roads became more passable, and winding down around 1910, with the advent of automobiles.

After introductions, the first pair entered “the ring” for a demonstration of riding and driving: “Gideon,” who was described as a 22-year-old gelding pulling a 1991 wagonette. Gideon was followed by eight other horse and vehicle duos (in one case a trio). Some of the carriages and wagons were built fairly recently, while others were vintage, including the second cart, described by the announcer as a “Sidebar Surrey from 1890 — a very American Sunday afternoon going-to-church vehicle.” 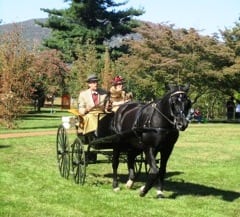 It was pointed out that most of the vintage vehicles were built in factories and then assembled by blacksmith shops. Many were made locally, by such establishments as Newburgh Carriages and Delamater & Sons of Poughkeepsie. The rest of the field included “Jimmy,” a Hackney pony with “high, flashy action” and “Midnight’s Apollo,” an 11-year-old Morgan Horse gelding driving a phaeton (or owner-driven vehicle) recently restored by an Amish company in Pennsylvania, and owned by Al and Sallyann Gerelli of Cold Spring. The Gerellis eventually earned first place.

Giving the event quite a spectacular flourish was the large black commercial cart, labeled “Harmon and Castella Printing Ink.,” and driven by a large, handsome pair of draft horses, “Edward” and “Richard.” The variety of the field was exemplified by the horse that followed — a Tennessee Walking Horse, “Misty,” a type bred, it was explained, to work on plantations in the south. It was further pointed out that Misty’s rider, Laura, was using a “bitless bridle,” a recent innovation considered by some to be more humane. 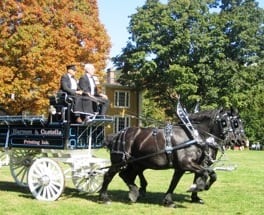 The 10th horse of the day was a 13-year-old “ride and drive” mule called “Suzie” who hailed from Hopewell Junction. Suzie’s mother was a Belgian mare and her father a donkey. “Mules are becoming more popular,” according to the announcer.

This part of the day’s festivities ended with a pair of mini-horses and mini-riders, as two local girls, Cold Spring’s Anna Campbell Birn and Garrison’s Rose Lindbergh, dressed in period garb, escorted mini-ponies “Mighty Mouse” and “Hobby Horse,” respectively, and paraded them, along with riders in wooden carts, around the ring. The commentary advised that mini-ponies are a fun and popular breed — driving only, no riding — that has just come into prominence over the last 10 to 20 years. Both girls received ribbons and then did double duty as part of the pony drill team that followed the drafting competition. 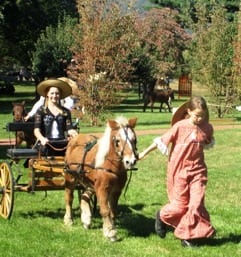 Rose Lindbergh leading her mini-pony Hobby Horse round the course

That drill team consisted of riders from Leona Dushin’s school, Manitou Farm, who demonstrated cantering as well as jumping. As noted in a previous Philipstown.info story, Dushin, now 85 years old, is still going strong, and was spotted pre-event directing her riders and even carrying and laying out the sections of wood used in the jumping demonstration.

It is expected that Horse and Carriage Day will return at around the same time of year in 2012. Visit www.mhdany.com for a calendar of events and more general information.
Photos by A. Rooney