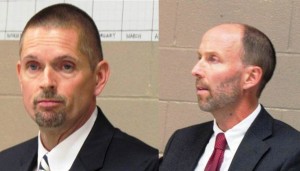 With two weeks to go before the Nov. 8 election, Philipstown Town Supervisor candidates Richard Shea and Lee Erickson clashed Monday night (Oct. 24) over dirt roads, governance, the controversial fire protection study, and support for the new zoning code. Shea, a Democrat and the incumbent supervisor, and Erickson, a Republican newcomer, met in Cold Spring at the Haldane Central School cafeteria at a candidates’ forum, sponsored by the Putnam County News & Recorder newspaper. The event followed other debate opportunities Erickson had spurned, one of which, an Oct. 3 forum sponsored by Philipstown.info, became one of the evening’s flashpoints. PCNR staff members posed the questions and the responses often drew applause, cheers, jeers, or laughter – sometimes simultaneously – from the crowd of about 150. Although Shea and Erickson traded an affable handshake before the debate, testy exchanges soon followed, beginning with Erickson’s opening statement. In it, the Republican referred to his Democratic opponent as “King Richard” and denounced what he termed Shea’s “disappointing level of arrogance.”

“I believe that everyone’s opinion is important,” said Erickson, who cited his background as a founder of Citizens of Philipstown (COP), a group organized in 2009 in dissatisfaction with Town Board rezoning efforts. He said COP was “able to compel the current administration to change or amend portions of the zoning document to a more balanced zoning law that took into account all facets of our community. Unlike my opponent, I believe in bottom-up not top-down, grass-roots over one-person rule. But the town should have never endangered property owners in the first place.” Nor should it “cater to the interests of one small group to the near exclusion of the rest,” Erickson said. He similarly faulted Shea for “a contingency budget ran into the ground, incapacitating our highway department, alienating a large portion of our volunteer fire and emergency services personnel with a flawed study” and having “fractured us as a community.” Owner of a small wood-working business and lifelong resident, Erickson also said that Shea had created friction with Putnam County and linked him to a critical New York State audit of town finances.

In response, Shea referred to his qualifications and experience –- eight years as a Town Board councilor and two as supervisor — and the “lists of accomplishments” by the board under his tenure. “One of the things I’m most proud of is the zoning. I’m not going to back away from that,” he said. “We never shut anybody out. We did get a consensus document in the end that goes a long way toward protecting what we value the most in this town. That’s clean water, open space, the quality of life we’ve all come to appreciate here.” Moreover, “to show solidarity with taxpayers,” he said, “I cut $500,000 in expenditures,” including significant reductions in the highway department, recreation and emergency services budgets “without cutting the quality of those services.” Now, to upgrade government services, the town is committed to occupying part of a municipal complex planned for the former Butterfield Hospital property, a site to include a center for senior citizens since “they deserve more” than they currently get.

Erickson later said that while some residents assume he would repeal the new zoning law, that is “absolutely not” his intent. “I agree with the new zoning,” he emphasized. “I worked a long time on it with the town, to get it where it was, so there was balance.”

Shea strenuously objected: “To say he supported the zoning is a fantasy, a fallacy,” Shea said. “At every step along the way he tried to thwart it” and “went up and down [Route] 9 spreading a campaign of disinformation to business owners, riling people up” with allegations of property seizures.” Dealing with all that “is what took the process a lot longer,” Shea asserted.

[CLICK HERE FOR VIDEO OF THE TWO CANDIDATES ON THESE ISSUES]

From zoning, the town’s previous divisive issue, they moved to an up-and-coming source of contention: dirt roads. Both Shea and Erickson rejected creation of a dirt-road tax district and said at least some dirt road stretches should be paved. They parted company over the best way to handle paving decisions. Erickson favored leaving the matter to Highway Superintendent Roger Chirico, a dirt road critic and fellow Republican candidate. Shea advocated citizen input. “The steep-slope sections of our dirt roads do need to be paved,” Erickson said. Drainage deficiencies “destroy private property,” harm wetlands, and streams, and drive up maintenance costs, he said. “There’s a lot of wasted money” and “every time it rains we’re throwing tax dollars right out the window.” He urged that paving “be addressed immediately,” by the highway superintendent.

“Where there are chronic, year-in, year-out problems, those do need to be addressed,” Shea said. “There are going to be some areas that see pavement. It’s not just about pavement, though,” but infrastructure, proper engineering, and drainage as well, he added. He also challenged Erickson’s proposal that the matter be left to the highway superintendent. “People live on these roads. They pay taxes. I think it’s an opportunity again to get public input. It’s not going to be a long-term discussion, but we will get people involved and solve the problems on the dirt roads.” He described it as odd that Erickson would deride him for insufficient public input on one issue but advocate that another controversy be settled solely by Chirico. “I agree public input is good. We always need it,” Erickson responded. “But I’m not going to allow special interest groups to dictate how we do these dirt roads.”

Both men also said they found items of merit in the so-called Graner study, the lengthy review of fire protection and ambulance services in Philipstown. “There are a few good points that came out of that study,” apparently being implemented now, Erickson said. “But I believe it alienated our volunteers and pretty much slapped them in the face. That study should have been halted … should’ve been thrown out. That study couldn’t have been worse, even by design.” He said the fire companies should have been allowed to select the consultant on the study.

According to Shea, “there are some valuable things in that report.” While he said he disliked the document’s “combative” tone, he noted that the author “didn’t get great cooperation“ from local fire and emergency services volunteers. “We need to look at where $2.1 million a year is being spent to make sure that our volunteers are safe, that they’re getting the things they need as far as core mission, and also that the taxpayers are getting the value they deserve,” Shea said.

Overall, the two contenders agreed that trimming budgets whenever possible to spare taxpayers is important. Shea reiterated that he had cut expenses generally and significantly pared the recreation, highway department and emergency services budgets. A few years ago, he said, the town spent $2.4 million on emergency services. “It’s $2.1 million now. We thought we could find some savings there” and emergency services members shared his concern, he said. “They realized we can roll things back and still accomplish the core mission.” Erickson concurred that “we need to keep budgets as low as possible. We need to consolidate services wherever we can” and promote smart new growth. To do so, he recommended coordination with the county to entice larger businesses that would bring employees who need housing. The ensuing development could “spur building again … spur the mortgage tax,” Erickson suggested. But Shea warned that more housing and related construction would increase demand for services, especially for education: “If you’re suddenly looking at building a new school … you’re going to see your taxes skyrocket.”

Shea and Erickson likewise sparred over their attendance -– or lack thereof -– at public candidate forums and an economic planning seminar. Asked if he considered Erickson fearful for avoiding earlier forums, Shea answered: “I can’t say whether Lee was afraid or not” and whether it was Erickson’s choice “or his handlers telling him he shouldn’t go to these events,” such as the Philipstown.info forum or one or more that the Chamber of Commerce and League of Women Voters offered to host.  “We’re finally together tonight, and that’s a good thing.” Nonetheless, he said, Erickson’s “lack of participation in the Philipstown.info forum and his reluctance -– or his outright refusal –- to participate in any of the other forums says a lot.”

Erickson replied that “I’m not afraid. I’m here tonight. I didn’t participate in the forum” held by Philipstown.info “because I didn’t believe a moderator should be player, coach and referee. I didn’t believe it was a constructive venue.” On Oct. 3, he said, he went to a regional seminar on economic growth – “something we need to do here in town.”

Shea said he had been to numerous economic development workshops and that on Oct. 3 “I thought it was more important to get my message out to the public.” He recalled that the questions had been made public two weeks in advance. “So as far as it being biased, I just don’t see that. You have the questions. You formulate your answers and show up. If you’re going to lead, it requires showing up and standing up for what you believe.”
Photos by M. Turton, Video by K.E. Foley