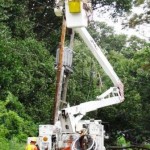 Philipstown was still largely without power late this afternoon, Philipstown Supervisor Richard Shea told Philipstown.info. Shea had just gotten off a conference call for local municipal officials and the staff of Central Hudson as the utility struggles to restore power all over the region. “There were over 40 communities represented on the call, so we’re in good company but that doesn’t provide any comfort to anyone,” he said.

Shea said the current estimate is that 80—85 percent of Philipstown is still without electricity. He said Central Hudson predicted “global restoration” (95 percent of homes) for the town by sometime tomorrow (Tuesday) evening. Although Cold Spring and Nelsonville have had some power restoration, parts of the villages still remained without it.

The need for creating local shelter of last resort capacity was also on Shea’s mind as he prepared for a town board meeting Wednesday night. “It’s great that the county opens a shelter (in Mahopac) but I think it’s time we have some places locally where people can bed down in for a night, said Shea. The recent Hurricane Irene and Saturday’s Nor’easter snowstorm had many reports of stranded drivers and local residents seeking shelter at firehouses which welcomed them but are not setup for actual shelter duty.