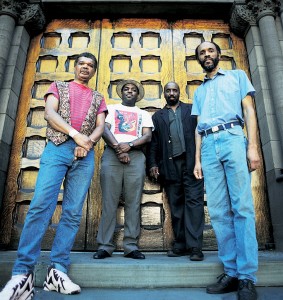 Members of Other Dimensions in Music

The avant-jazz ‘supergroup,’ Other Dimensions in Music (ODIM), closes out the new evening music series for its first season at the Chapel of Our Lady Restoration on Saturday, Nov. 5 at 7:30 p.m. Each member of the ensemble — Roy Campbell, Jr. on trumpet, flugelhorn and flute; Daniel Carter on saxophones, clarinet, flute and trumpet; William Parker on bass; and Charles Downs on drums — is a master improviser as well as recognized leader on multiple instruments, making ODIM an incomparable musical experience. This performance, the group’s first in Cold Spring, promises to conclude the Chapel’s 2011 evening music series on a very high note.

Roy Campbell, Jr. was born in Los Angeles in 1952 and grew up in New York. His musical journey began as a child with piano lessons, initially inspired by his father, whose trumpet was the first one he used. By the time he entered high school, young Campbell was playing flute, recorder, and violin, and he began studying trumpet as a high-school senior. As a young fan, Roy met Lee Morgan and in 1971 he began participating in Jazzmobile workshops, working with jazz masters Kenny Dorham, Howard McGhee, and Lee Morgan, as well as with Howard McGhee and Joe Newman in Jazz Interactions workshops. Later, as a trumpet major at Manhattan Community College, his professors were Leonard Goines and Dick Vance, and he studied music theory, arranging, and composition with Yusef Lateef. As a bandleader, Campbell has long maintained several working units. Tazz, The Pyramid Trio, Downtown Horns, and Shades and Colors of Trane, a tribute band for master saxophonist John Coltrane. Campbell’s composing, arranging, and playing embrace a wide range of roots and styles, including jazz, funk, rock, rhythm & blues, hip-hop, rap, classical, reggae, and more. Robert Innapollo, in a review from Cadence Magazine, stated, “Campbell is a monster trumpeter. He’s the latest in a long line that has extended from Navarro through Brownie through Booker Little and beyond.” Campbell has worked with Rashied Ali, Billy Bang, Evelyn Blakey, Dave Douglas, Carlos Garnett, Henry Grimes, Eddie Harris, Makanda Ken McIntyre, Jemeel Moondoc, David Murray, Sunny Murray, William Parker, Hannibal Marvin Peterson, Sun Ra, Woody Shaw, Cecil Taylor, Charles Tyler, Wilbur Ware, Frank Wright, John Zorn, and a countless host of other bands and ensembles. Campbell and his contemporary bands play virtually constantly in concerts, on tour, and in festivals all over the world.

Composer and bassist William Parker, was born in 1952 in the Bronx. Steve Greenlee of the Boston Globe wrote, “William Parker has emerged as the most important leader of the current avant-garde scene in jazz.” He has worked in many of the more important groups in this genre, including The Inside Songs of Curtis Mayfield, Little Huey Creative Orchestra, In Order to Survive, William Parker Quartet, Raining on the Moon and other groups. Parker is also a composer and a poet. As a bassist, Parker is possessed of a formidable technique, albeit an unconventional one. Unlike a great many jazz bassists, Parker was not formally trained as a classical player, though he did study with Jimmy Garrison, Richard Davis, and Wilbur Ware and learned the tradition. Parker is one of few jazz bassists who regularly plays arco. He also plays several other instruments from around the world, including the West African kora. From the beginning of his career Parker has commanded a unique degree of respect from fellow musicians. In 1972 at the age of 20, Parker quickly became the bass player of choice among his peers. Within a short time he was asked to play with older, established musicians such as Ed Blackwell, Don Cherry, Bill Dixon, Milford Graves, Billy Higgins, Sunny Murray etc. In 1980 he became a member of the Cecil Taylor Unit, in which he played a prominent role for over a decade. Parker has released over 20 albums under his leadership. In 1995 after years of obscurity as a leader, he released Flowers Grow In My Room, on the Centering label. Other CDs including O’Neals Porch and Raining on the Moon. The album Sound Unity was chosen as one of Amazon.com’s Top 100 Editor’s Picks of 2005. Parker has been prolific, composing music for almost every group with whom he has performed. His compositional skills span a range including operas, oratorios, ballets, film scores, and soliloquies for solo instruments. Parker is also a poet, with three volumes published thus far

Charles Downs was born in Chicago, and his family moved to the Bronx when he was four. He became a musician because of the profound influence John Coltrane had on him, and because Downs’s uncle was the great “Papa” Jo Jones, the father of modern drumming. As a child, Downs remembers that Art Blakey and Max Roach visited the family, and the former gave him his first set of sticks; one of his early playing memories is sitting in with his uncle in a Dixieland band at the World’s Fair. After college and an Army stint, it was saxophonist Bobby Zankel who took Downs to audition for the Cecil Taylor big band in ‘73, and he played two concerts with Cecil Taylor at the time. Downs joined Ensemble Muntu from 1975 to 1981, Muntu recorded five albums and toured extensively. By the early ‘8O’s, Downs was also playing with Billy Bang, Roy Campbell, Jr., Raphé Malik, David Murray, David S. Ware, Frank Wright, and others. In ‘81 Rashid rejoined Cecil Taylor for three more years, playing mostly in Europe in a quartet setting with Jimmy Lyons and William Parker.

Back in New York again from ‘83~’90, Mr. Downs continued working in particular with many powerhouse saxophonists, including Peter Brötzmann, Arthur Doyle, Charles Gayle, and Glenn Spearman. He credits Charles Gayle with getting him into playing tunes and helping him realize the time side of his playing. Another stretch with Cecil Taylor from ‘90 to ‘95 took Rashid all over Europe “and everywhere,” also bringing him opportunities to play with special guests in the band including Lester Bowie, David Murray, and James Newton. Time Out New York declares Downs “among the best avant-garde drummers, a timekeeper whose pulse is so subtle, supple and steady that he makes expressionism sound positively swinging.” Admission is $15 and $10 for students and seniors with valid ID. The Chapel of Our Lady Restoration is located at 45 Market St. in Cold Spring, NY. Free parking is available at the Cold Spring Metro-North train station. For more details, visit the Chapel website. Photo courtesy of Chapel Restoration