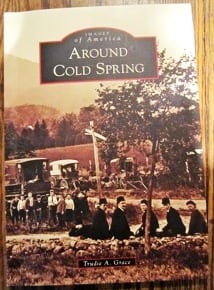 For the many Philipstowners who have a bad case of local history fever, Trudie Grace’s just-published volume, Images of America: Around Cold Spring, provides the best possible tonic. The 116 pages of double photo spreads feature lengthy, well-researched captions, which not only identify the subject of the images, but contextualize them in a larger framework of period architecture, commerce, dress, artistic trends, and society in general. Pictured are street scenes of yore; recreational activities of the day, such as ice-boating and buggy racing; old-time businesses and their owners; important community events, such as the 1909 Hudson-Fulton Tercentennial; industry, including the Hudson River Stone Company; and the steamboats and sloops of the Hudson.

Grace, who has been the curator at the Putnam County Historical Society and Foundry School Museum (PCHS) since 2001, was approached by Arcadia Publishing for this contribution to their Images of America series. The format for the series is to use archival photographs – “they did a wonderful job with the negatives, cleaning up images, getting the perfect saturation: rich, without that sheen you often get on top of black and white images” says Grace – to tell the story of historic places in a manner which illustrates the shaping of the community today. Grace was responsive to the overture from Arcadia, because she felt she had the best access to excellent material, working for the PCHS, and she also knew of the other sources she could draw upon. Grace was introduced to the PCHS through her work with the National Academy of Design, for whom she was an associate curator. Eleven years ago, then-PCHS director Doris Shaw asked Grace to guest curate an exhibit called Poetic Joining: The Hudson River and the Highlands (19th Century Paintings from Private and Public Collections). Shortly thereafter, the PCHS decided to hire a professional curator, and Grace was able to “segue between doing that exhibition to curator. It was an easy transition and it’s perfect being a part-time professor of art history in the city and part-time curator here.” Grace holds a B.A. in art history from Sarah Lawrence College, an M.A. in art history from Columbia University, and a Ph.D in the same field, with a specialization in nineteenth and twentieth-century art from The City University of New York. 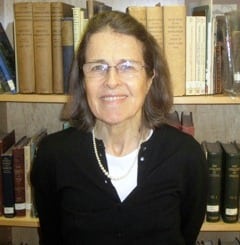 Most of the photographs used in Around Cold Spring were taken between 1860 and 1930, with the majority dating from between 1890 and 1920. Many are derived from 19th-century glass plate negatives. More than half of the photographs are from the collection of the PCHS, while the balance were obtained by Grace from 19 private collectors, mostly local. Many of these images were never before published. Grace, although initially approached through her position as curator, wound up authoring the book independent of the PCHS, largely because of deadlines, using every spare moment of her time to bring the book in on schedule, (she also teaches five classes at the Fashion Institute of Technology), with just six months to pull everything together. The task was made more daunting by the lack of careful record-keeping through the years in Philipstown. Grace was aided in her mission to “clear up misinformation, get multiple sources and get everything correct,” by articles written by Nelson DeLanoy for the Putnam County News & Recorder during the 1970s and 80s. DeLanoy was, in turn, using historical sources from churches, schools and the PCHS. Aside from archival material at the PCHS, which, along with photos, included historical documents and genealogical files, Grace also consulted the stories written by town historian Donald MacDonald, and church records, though she notes these can be full of mistakes. Some of the photographic material at the PCHS has yet to be fully organized, so it was a bit of a treasure hunt pulling it all together for the book.

To present the images cohesively, Grace has divided them into various categories, ranging from “Down by the Riverside: Hudson River Views and Activities” to “Getting Together” Associations, Socializing and Celebrations” and “Serving a Growing Populace: Civic Structures, Schools, and Churches” as well as sections on the West Point Foundry and other industries, farming, and houses, estates and residents. An introductory essay, also by Grace, delineates the geography of Philipstown and tells the story of its origins, from the time of the Native Americans, through the British settlement, the American Revolution and the Foundry Era. The introduction also touches upon the Hudson River School artists and the Knickerbocker writers, before chronicling the decline of the foundry and the economically depressed years that ensued in the first half of the twentieth century.

Grace also describes the arrival of the barons of industry, often railroad-related, and the residences they had built for themselves, replete with innovations in landscaping. Matters civic and bucolic round out the essay, which finishes with a discussion of present day historic preservation efforts. Images found in the book reflect all of the points touched upon in the introductory essay. Grace’s concluding words provide background on the images in the book: “Most of the images … are photographs taken between 1880 and 1930 … Many are little known or have never been published. Some derive from glass plate negatives. Albert Terwilliger, an ordnance inspector at the West Point Foundry, was often the photographer. Also included are photographic images from the 1860s and 1870s made with two separate lenses and printed side by side so that, when viewed through a stereoscope, they appear to be a single three-dimensional image. These were popular from the 1880s to the early 1920s [and are the subject of a current PCHS exhibition]. With the exception of several prints and a map, the remaining images are from postcards, many dating in the early years of the 20th century.”

The nineteen private collectors who loaned material for the book were all “very generous,” according to Grace, who mentioned Mark Forlow as “a wonderful source” and also expressed gratitude to Janet Rust. She recalled that “Terry Lahey came in one day because I had used something of his for our Making a Living: Businesses in Cold Spring and Beyond exhibition. I thought he might have more. He brought me a big collection of Centennial celebration photographs from 1946. Even though most of the images in the book date from before that time, these were so good that we used them.”

Grace hopes that Around Cold Spring will become an authoritative resource for students, locals interested in history, historians and visitors alike. She feels it is a much-needed volume, because of Philipstown’s importance, not only regionally, but nationally, in U.S. history. Around Cold Spring will be available for sale — well — all around Cold Spring, at the PCHS of course, but also in many stores and sites along Main Street and in Philipstown — places such as the shops at Boscobel and the West Point Museum. It is also available on Amazon.

Grace will be presenting a lecture on Around Cold Spring and signing copies of the book on two occasions in the coming week: on Saturday, Nov. 5 at 5 p.m. at the PCHS and on Tuesday, Nov. 8 at 7 p.m. at the Desmond-Fish Library.

The current exhibits, Stereoviews and Photographs and Philipstown Potpourri: Fine Art, Photographs, and Favorite Artifacts From The Collection run through Dec 11. The next PCHS exhibit will be titled A Summer Afternoon, and will feature clothing worn between 1850 and 1950. This exhibit will once again be guest curated by Lourdes M. Font, who did the same for The Gilded Age exhibit. The selection of dresses for that exhibit has been done, and they are now in the conservation stage. Grace will contribute an essay about summer activities, “not just those of the monied classes, but every bracket.” For more information, visit http://www.pchs-fsm.org/. Photos by A.Rooney