Had the Five Man Electrical Band’s 1969 hit song, Signs, been written in 2011 as part of the just-completed Philipstown election, the chorus may well have been altered slightly to go as follows: “Sign, sign, everywhere a sign/Blockin’ out the scenery, breakin’ my mind/ Vote this. Don’t vote that. Can’t you read the signs?” While every election includes uncertainty, one thing that is certain is that as voting day draws closer, the landscape will be increasingly dotted with election signs – on private lawns, on roadsides and on street corners, even in the back of pickup trucks. But, do election signs actually make a difference? Do they influence people’s vote? Advertising is always part art and part science, but when it comes to the effectiveness of election signs, it really depends on who you ask. 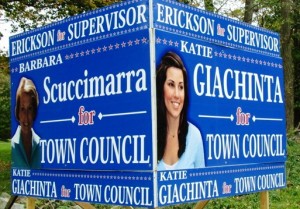 According to the website SavannahNow, a recent experiment conducted by Vanderbilt University offers “scientific proof” that signs have a positive effect – from a candidate’s perspective. Researchers placed signs promoting a non-existent candidate along a busy road near a school. Three days after signs touting “Ben Griffin” for public office, the school’s PTA surveyed parents, asking them to name the top three candidates in the upcoming election. Twenty five percent of those who completed the survey included the fictitious “Ben Griffin” in their top three.

Another website, NC Politics.com, boldly supports the notion that election signs are indispensable. It says, “Campaign yard signs are about as American as apple pie and hotdogs! In order to have an effective winning strategy you MUST use this form of advertising. From the White House, to the State House, to the County Court House politicians rely on this proven method to gain name recognition and reinforce the strength of their campaigns.”

But not everyone agrees – or even claims to know the answer one way or the other. Askville.com, as its name would imply, provides readers with an insightful list of questions about the value of election signs. Does the quantity or locations of signs influence votes in a positive or negative way, or not at all? Do they help give good name recognition for the candidates? If signs are placed on the property of an “important” person, is the candidate more highly regarded? Do signs influence the vote at all? Excellent questions. The problem? Askville.com provides no answers! 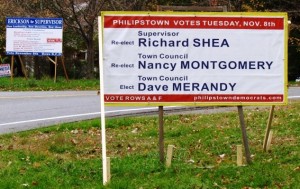 In a story on Cleveland.com, residents of Marrietta, Ohio offered some down-home wisdom on the value of political signs. One resident said signs don’t influence her – but that the number of signs tells her something about the candidates. “I just figure one of them has more money than the other,” she said. Another resident allowed a sign to be placed on her lawn but said something that may ring true with quite a few citizens of Philipstown. “I think they’re unnecessary,” she said. “They’re up too long. It’s a small town. Everybody knows the candidates.” But, a fellow resident offered a different view. “Signs are kind of like polls. As I drove around before the last…election, I was…counting the …signs for my guy. It was close, but the result made me feel good.”

Maybe the fellow from Marrietta has it right. Maybe signs are about political psychology. According to Wichita State University political scientist Mel Kahn, when Richard Nixon ran for president the first time, psychologists were employed to determine what colors would provide the greatest contrast and call the most attention to election signs. Their answer? Black and orange. There was a catch though. “They …realized that when they appeared within a couple days of Halloween…they became sort of a joke…so they would pull the signs…and put in other colors temporarily,” Kahn said. He does not think that political signs are entirely a joking matter. “They don’t actually produce voting a certain way. What they do is enable the first element to be reached, of getting candidates known. And they particularly work if they’re strategically placed, so that there are many that are together, so you get a bam, bam approach.”

The vote may have been split in Philipstown, but it’s a pretty safe bet that, regardless of political affiliation, a large majority agree that political signs in 2011 exhibited a “bam, bam approach.” Every strategic intersection in town was covered with signs – sometimes large, sometimes small, more often both. Democratic candidates went with a very conservative look, their signs consisting of candidates’ names and little else. While they did use some color it would be an exaggeration to describe their signs as colorful, certainly not Nixonian orange and black. Their large signs exhibited a plain white background. Shea, Montgomery and Merandy limited their use of large, eight foot by four foot signs to the most prominent intersections. In numerous other locales they opted to display small, ground-level signs in close succession. A smaller version of bam, bam, bam.

If the Democrats’ signs could not be called colorful, their opponents’ signs certainly could not be described as bland. Republican candidates used many more large signs; small billboards that employed a dramatic, navy blue background. Large, full color photos of the candidates made them striking by any standard. And the Erickson, Giachinta, Scuccimarra signs even morphed in appearance as the campaign progressed. Additions were tacked on to the top and bottom of some of their large signs, urging of residents to vote Erickson and Giachinta. Scuccimarra followed suit – tacking a larger rendering of her name to some of the billboard designs.

Signs for MaryEllen Odell and Alan Schneider, candidates for Putnam County Executive, were few and far between, perhaps a nod to what was perhaps the political inevitability of Odell’s victory. 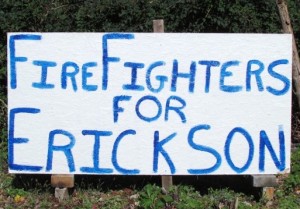 The most puzzling and perhaps most commented on signs in Philipstown involved a series of large, primitive-looking, hand-painted calls-to-political-action along Route 9. With a background painted white and rough, black letters, they supported Erickson, but were unattributed and spoke on behalf of groups whose very existence, in some cases, could be questioned. “Students for Erickson,” and “Farmers for Erickson” were especially puzzling. “Small Business for Erickson” was not attributed to The Chamber of Commerce or any other business organization. “Firefighters for Erickson” must have caused a stir in area fire departments, as local fire companies recently made it clear that they do not vote as a block and do not advertise politically.

A random survey of 10 Foodtown shoppers who voted in this year’s election produced at least one unanimous result. Asked if election signs influenced their vote this year: “No” was the universal response. When asked their thoughts on the signs overall, positive comments were scarce. Here’s a sampling:

I didn’t even look at them really.

I really don’t like it when there are 63 of them at one intersection.

The photographs bothered me.

They clutter things up.

They stay up too long- they should come down election night.

There’s too many of them.

They cancel each other out.

I thought the Republicans signs looked good. I didn’t like the big signs…I prefer seeing a small sign on someone’s doorstep.

Ironically, the one person you can’t blame for the proliferation of signs in this last election is Grey Zeien, whose Cold Spring company Grey Printing produces signs and other graphic materials. Zeien said that neither Republican nor Democratic candidates purchased any signs as part of this year’s campaign. He said Democratic candidates did use his services for producing significant numbers of pamphlets, post cards and other printed materials. 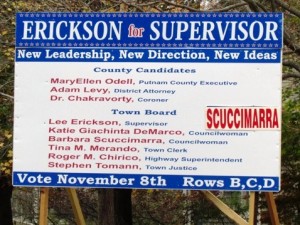 Signs from the 2011 Philipstown election are all but gone now. Like Christmas ornaments on Dec. 26 they quickly seem out of place. Did they have any effect on voters? Were people swayed to vote, to change their vote or to stay true to the candidates of their choice? We’ll never know for sure. But one thing we can be sure of – love ‘em or hate ‘em – election signs will appear once again, just prior to the area’s next political contest. Photos by M. Turton