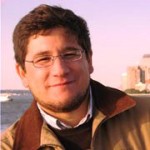 On Thursday, Nov. 17, Arts on the Lake hosts Peruvian short story writer Andrei Bezzubikoff in a reading of his work in Spanish at the First United Methodist Church as part of Arts on the Lake’s Writers and Writing seriex.

“Asilos de Luz” is a book composed of eight short narrations where poetry is concealed under the plots of: a betrayed love abroad, an innocent immolation, the fight against a town’s laws, the long awaited reunion of two lovers, a last twine that brings together moon and sun, and the speed of a winter in Paris. The eight stories are linked by the impossibility of defeating destiny and by the uneasy fight between love and death. Misunderstandings, windows, desires, everyday lives, mythos, memories and fires are what the metaphoric language unveils in the book. Andrei Bezzubikoff, using a minimalist language portrays, what is dark and deep in the being: love, fate, chance and death – all hidden by our routine. Language is the central theme in this book, and it works similarly to the ocean that enwraps light and conceals the Earth’s secrets.

Andrei Bezzubikoff, a native of Huancayo, Peru, is the author of “Asilos de Luz”, which was published by Hipocampo Editores in 2010. Before starting his voluntary exile in the United States, he studied philosophy and theology in the Facultad de Teología Pontificia y Civil de Lima. During those years, he wrote an unpublished poetry book, “Malabrigo.” “La Mujer de los Barcos,” a narration included in “Asilos de Luz” was awarded first prize in the contest “2008 Palabras.” He is currently a student at Westchester Community College, and is working on “Paperweight,” his latest compilation of short stories. Recently, he gave reading in the McNally bookstore in New York City and in the Ossining Public Library.

The Writers and Writing series has been organized by Dr. Heather Ostman, assistant chair of the Westchester Community College English Department. The Methodist Church is located at 83 Main St. in Brewter. Information on all Arts on the Lake activities is available on their website or by calling 845-231-1084.