Bullying is a problem that has, in the past decade, received prominent notice by schools and municipal agencies and the public. With the advent of the Internet has come “cyber-bullying,” a new arena that can be equally, if not more frightening to victims: so much so that a number of suicides have been reported.

As part of its ongoing efforts to combat and prevent bullying, the Haldane PTA held a workshop on Nov. 10. Introduced and moderated by Haldane Superintendent Dr. Mark Villanti, the evening’s format began with introductory remarks from the panel, followed by questions from PTA President Laura Danilov and Vice-president Heather Schroder. Afterward, the floor was opened to questions from the audience and concluded with closing remarks from the panel. 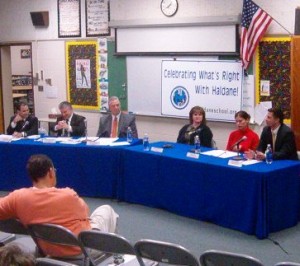 In their introductory remarks all panelists spoke along similar lines. DA Levy said that his primary “responsibility is to provide a safe environment for kids to learn . . . without being afraid.” In 2009, a program was created where the DA’s office works with district superintendents. A result of the program has been more than 10 workshops. Levy explained that offenders 16 and older are processed by his office. Offenders 15 and younger are handled by the family court. “Existing laws are not up-to-date [regarding cyber-bullying],” he said, “and so we have to work with what we have.”

Judge Reitz, a 16-year veteran of both family and criminal courts, stated that it is “most important to work with children.” Describing his experience with bullying cases he said that most kids were good and only needed guidance to change their behavior. Napolitano agreed saying that kids are, for the most part, good, but may “have been misled.” He acknowledged that he and his fellow panelists know they are “preaching to the choir” at these workshops. He challenged parents to “take on a different role” by reaching out to other parents who would not otherwise attend.

Youth Bureau Director Joseph DeMarzo summarized his job as being “responsible for a continuum of care for adults and children.” He concurred with Reitz’s comments and emphasized that prevention is a “major effort” made by his department. Emphasizing the importance of prevention he said that a “healthy childhood lasts a lifetime.”

Elementary School social worker Curry told the audience that Haldane has “many programs” in place. Students in grades K-4 participate in the KELSO (a conflict management skills program;) a six-week course devoted to prevention and promoting social skills and positive behavior. The school’s “no more bullying” program has recently been folded into the KELSO program. Acknowledging that there are differences between boys and girls (when it comes to bullying) Curry described a new program called 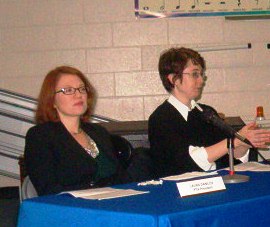 The 3rd Grade Girls Book Club, where girls talk about assertiveness, leadership and success for girls and women. New Elementary/Middle School Principal Harrington began his remarks saying “Nothing is more important than safety of [the] children” and that “no child should fall beneath our radar.” He described a school program called Second Step, aimed at students in grades K-8. The program addresses how students can be “effectively assertive” and how to “handle difficult social situations.”

Following is a condensed summary of the questions posed by the PTA and the panelists’ responses.

PTA: What is bullying?
DeMarzo: Repeated attacks of intimidation over time. Cyber-bullying is the most important issue today.
Levy: Acts of abusive behavior, over a period of time.

PTA: What is school policy/procedure [on bullying]?
Harrington: The policy is described in the school Code of Conduct. Julia Sniffen (Assistant Middle School Principal) is the first to respond and investigate. If action [the incident] is repeated, then a meeting with parents is held and other incremental steps, as described in the Code of Conduct, are taken.
Levy: If things rise to a criminal level, the school can call law enforcement. Working with the school, the probation department can help both the victim and aggressor. If the bullying doesn’t stop, parents should contact law enforcement directly. Schools have certain confidentiality responsibilities and can’t always tell [all] details to parents. The District Attorney’s office can, and will.
Reitz: It’s not a bad idea to contact county agencies. Parents should not be fearful that doing so will create a mark on the student’s record. Most kids respond and do well with appropriate guidance.

PTA: What tips can you give for talking to a parent?|
Harrington: First, let the school address the problem.
DeMarzo: If parents are friendly, it may make sense to talk outside the school. Create a dialog.
Levy: For cyber-bullying, be non-accusatory because you never know the whole truth about what happened.

PTA: What should a child do if they see another child being bullied?
Harrington: Determine exactly what the child saw and determine whether is qualifies as bullying. Be supportive of the child being bullied.
Curry: Children practice dialogs [addressing this kind of situation] during KELSO.
DeMarzo: Kids need to support kids.
Harrington: Haldane has a Peer Leaders program where senior students speak to younger ones.

PTA: What are the signs of bullying?
DeMarzo: Loss of interest in things they were previously enthusiastic about. Depression, difficulty sleeping, being sick more often and isolating themselves.

PTA: What should a parent do if they witness a bullying incident not involving their child?
Levy: It’s hard to know whether it’s bullying, since the repetition factor is not known, but don’t turn a blind eye. It’s better to be safe than sorry.

PTA: Is there a difference in approach [to bullying] between elementary and middle schools?
Harrington: [They] are not really different. The same protocols and procedures are followed.

Tom Benjamin (parent): What advice can you give a parent trying to set up a program?
Reitz: Evenings like tonight. Know where your kids are going online.
Levy: Schools have expertise and can educate parents on what to look for.

Parent: What do you think about ‘zero tolerance’ policies and consequences for infractions?
Levy: This is a good message for schools to get out at all grade levels . . . must be started at an early age. Parents need to teach this too.
Reitz: Lessons should be learned at home. Parents must be involved at all ages, because schools will not solve the problem without them [parents.] DeMarzo: Sanctions must be incremental. [Use] teachable moments; help kids to gain self-esteem

Parent: How do you teach empathy?
eMarzo: By example; as role models.
Harrington: School is also responsible to teach kids.

Parent: What if you believe there is an issue but the other parent denies it?
Harrington: I would try and try to speak with them.

Parent: There are programs for victims, but what group programs are available for bullies?
Napolitano: The [probation] department has mandatory programs for kids and [their] parents.

Parent: What programs are available for young bullies?
Napolitano: PINS [Persons in Need of Supervision] is a program that takes preemptive action before a crime occurs. Anyone can make a PINS complaint and it doesn’t have to go through the school.

Tips for Students and Parents
The District Attorney’s office has published a pamphlet about bullying that gives tips for parents and students as well as other online resources.

What Parents Can Do

What Children Can Do