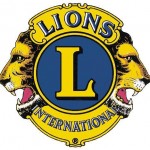 The home page of the Cold Spring Lions Club (CSLC) website opens with a simple, factual statement, “The Cold Spring Club was chartered on February 21, 1939 with 60 members.” Those original members, and all who have followed, are part of an international organization that has, according to Lions Club International information, “more volunteers in more places around the world than any other service organization.” Specifically, that means 1.35 million members in 46,000 clubs, in over 206 countries.

Founded in 1917, by Chicago business leader Melvin Jones, the Lions turned into an international organization just three years later, with Canada and Mexico the first two countries outside of the United States to establish branches of the club. Jones chose the name Lions, believing that the lion stood for strength, courage, fidelity and vital action. Soon after its inception, the organization was challenged by Helen Keller to “become knights of the blind in the crusade against darkness.” From that point onwards, a major focus for the club has been to aid the blind and visually impaired, working in particular to eradicate causes of blindness, be it from conditions like glaucoma or environmentally-abetted diseases such as trachoma and river blindness. Lions Clubs work individually, in their hometowns, and collectively, as part of the Lions Club International Foundation, which devotes itself to large-scale global humanitarian projects including provisions of food, water and clothing following natural disasters.

In its hometown, by name Cold Spring, but in reality all of Philipstown and beyond, the Lions have seen the need for its services rapidly increase since 2008. The CSLC now numbers about 40 strong, and its high school offshoot, known as the Leos, has seen membership gains in recent years as young people become more community service-oriented. This year approximately 40 students have signed on as Leos, under the guidance of high school English teacher Kelly McAvoy.

The CSLC attracts Philipstowners from all walks of life, of varying ages, backgrounds and political affiliations (or lack of). The common goal of all is the Lions’ motto of “We Serve.” In Philipstown this means everything from organizing the annual Senior Citizens Dinner, which Lion Betty Budney has been doing for decades, to the road clean-ups and annual Great Hudson River Sweep clean-ups which fall under Lion David Lilburne’s domain. It means collecting toys for the Christmas wish lists of needy local children, and providing free eye check-ups and glasses for those who can’t afford these necessities (children get referred by school nurses.) Through the years the Cold Spring Lions have worked to help fund the ground-breaking on the Cold Spring Tots Park, and they have contributed to the recent refurbishing of equipment there. They helped the Save The Dock group in the 1990s, when the Cold Spring docks were disintegrating. They work with Yorktown’s Guiding Eyes for the Blind, where a Cold Spring Lion is a member of the board. They have produced local results as part of worldwide Lions campaigns, for example in 1995 they raised $10,000 as part of a billion-dollar worldwide Lions effort to cure preventable blindness, according to Lilburne.

Lilburne says “We can always use more volunteers,” citing the marked increase in need locally in recent years, “After 2008 we realized people were hurting. Foodtown has run training seminars for the staff because customers couldn’t afford what they normally bought. There was a big jump in 2008 — it doubled then — and now it’s up more from that; we’ve been hurting for a while. If you have a job, you don’t notice and forget that others are still affected; these people get forgotten, left behind.” To address the issues of hunger the CSLC contributes to the local food bank each year. And in December they put together food baskets for those in need along with supplying toys and clothes for children in those families. Lion Betty Budney is the chair of that committee.

Meetings take place two times a month, at 6:30 p.m. on Mondays, at “The Church on the Hill,” the Baptist Church led by last year’s CSLC president Rev. Tim Greco (this year’s president is Rev. Tim’s wife, Beth.) Lilburne calls the meetings “informal … we have dinner out the back and go over events and needs. The beauty of volunteering is that there is a role for everybody in it. You don’t have to go all the time. I do the road clean-up and help with the Senior Citizens’ Dinner. I find if you restrict yourself to what you do best, you wind up doing a really good job.” 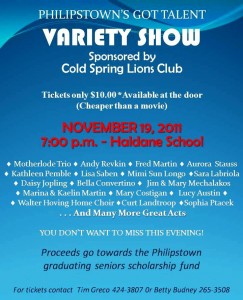 Lilburne, a former CSLC president himself, became involved when he moved to Philipstown back in the 1970s. “I felt it necessary to give to the community. I didn’t want to get involved in politics. I joined the ambulance corps, then the Philipstown Community Council and finally the Friends of the Desmond-Fish Library, and always the Lions.”

This Saturday’s upcoming second edition of the CSLC Variety Talent Show is a fundraiser for the Club’s Haldane scholarship program, and 100 percent of the proceeds will be designated specifically for this fund. This year the CSLC hopes to present a total of $4,000 in scholarships to Haldane graduating seniors. Last year’s first outing was a great success, and all of the performers from last year were invited back, with many accepting. New acts will also be performing. Stacy Labriola, who has coordinated the “talent” component of the show for the past two years calls it a labor of love, saying “When I was asked to participate and help produce the Lions Club Talent Show I was happy to do it. The Lions Club does so much good for this community and beyond. And it’s easy to find talent in Philipstown! We’ve got outstanding amateur and professional talent lined up to entertain you!” That talent includes Kathleen Pemble, Curt Landtroop, Andy Revkin, Open Book, Mackenzie Fariel, Mary Costigan, Jim and Mary Mechalakos, the Blue Notes, Daisy Jopling, Sophia Ptacek, Bella Convertino, Mimi Sun Longo, Lisa Sabin, the ‘Steam Heat Dancers,’ Fred, Kaelin and Marina Martin, Sara and Lindy Labriola, Kieran and Lucy Austin, Aurora Strauss, Harper Levy, Rose Lindbergh, the Walter Hoving Home Choir and Motherlode Trio among many others. The poster notes that at a $10 admission cost it is “cheaper than a movie.” The fun begins at 7 p.m. in the Haldane auditorium and tickets are available at the door.

Visit the Lions website for more information on the club, which has no religious affiliation, or just turn up to a meeting at the “Church On The Hill” at 245 Main Street. The next two meetings take place on Nov. 28 and Dec. 12, both at 6:30 p.m. Or come to the show and talk to one of the Lions there — they will be pleased to welcome you and find a way for you to help. Contact information can be found on the website as well.

*Words of a Lions volunteer featured in a Lions Club International found on the Cold Spring Lions website.