Perhaps as soon as Friday

Snake Hill Road, an important east-west link between Routes 9 and 9D, should re-open soon — perhaps as early as Friday, Nov. 18, by one prediction — Philipstown and Putnam County officials said Thursday afternoon. Also known as County Road 11, and in certain sections as Philipse Brook Road or Travis Corners Road, Snake Hill Road was badly damaged by Hurricane Irene at the end of August. “We’re working very hard on it. We’re hoping to get it open tomorrow,” although the weather has been uncooperative, Acting Putnam County Highway Commissioner Emma Kounine told Philipstown.info. In any case, “within the next few days it will be open,” she said. She said that vehicles would be restricted to one lane on the most damaged sections of road. Along with temporary lights to regulate traffic flow, the county is putting temporary message boards and other aids in place to help drivers, Kounine said. 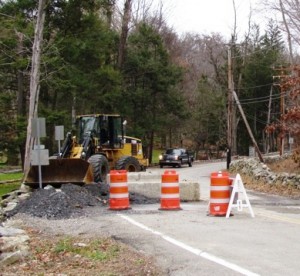 Kounine and Philipstown Highway Superintendent Roger Chirico both said that crews were busy Thursday readying the road for vehicles. Philipstown Supervisor Richard Shea also reported that Snake Hill should soon be returned to use -– albeit in somewhat limited fashion given the sections limited to one-way traffic. Chirico said he didn’t know of the exact day of re-opening, but concurred that it should be within days. At the very least, “I’ll know more on Monday,” he said. Chirico said the county had borrowed some Philipstown Highway Department’s equipment and “they’re in full swing down there. There’s a lot of action going on,” trying to get everything in place and functioning, including the traffic signals. Such temporary lights stop vehicles in one direction while allowing those going the other direction to proceed on a one-lane section of road.

He expressed exasperation that so much time had elapsed before real progress seemed to occur. “There was no reason for the hold up,” he said. Asked who or what might have been the cause of the delays, he answered, “I don’t want to get involved in that [speculation].” 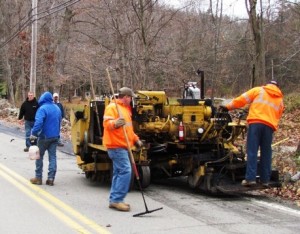 Chirico also said that on about 15-minutes’ notice, he had been invited to a visit to the road Wednesday afternoon by new County Executive Mary Ellen Odell, who toured the scene accompanied by the deputy county executive, county attorney and others, although not Kounine – who subsequently said she had not been informed of the excursion. According to Chirico, the group also included Philipstown Councilor Barbara Scuccimarra, and an editor from the Putnam County News & Recorder. Philipstown.info was not invited. Chirico said Odell “really wanted to go out and see” the Snake Hill situation herself. Shea noted that “the people in attendance, coincidentally, were all members of the Republican Party. I was not invited even though I have been requesting information twice a week. I hate to think that this was politically motivated” and find the whole thing “very strange indeed,” he added.

Kounine said that the county had also been busy in regard to the Mill Road bridge wash-out. “I arranged with the [New York State] Department of Transportation to lend Putnam County a 110-foot temporary bridge” to replace the bridge wrecked by the hurricane. The state removed the damaged structure and installed the temporary one, to be used as long as necessary “at zero cost to the taxpayers,” she said. While Mill Road is not a county road, the old bridge was a county fixture, Kounine explained.
Photos by M. Turton