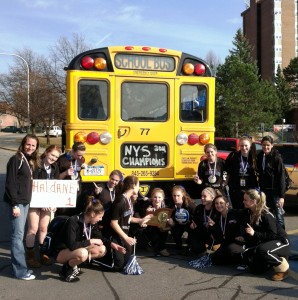 Lady Blue Devis after their win (Photo by Kathy Curto)

The Haldane Lady Blue Devils Varsity Volleyball team brought back gold to their school in the form of a New York State Class D championship Sunday (Nov. 20) afternoon. The highly rated team, which fought for the title and lost last year, bested all the competition through a grueling nine-game weekend tournament in Glen Falls, N.Y. The team won its last three games against its archrival the Lady Cardinals of Randolph High School (Randolph, N.Y.) by scores of 25-19, 25-22 and 25-21. “We lost to them in the final game last year, so we were avenging our title,” head coach Melissa Rossano told Philipstown.info shortly after the team got off their bus in the Haldane parking lot. (CLICK HERE FOR VIDEO OF THE COACH).

“We worked really hard this season to achieve this. We worked really hard in practice; we knew every day brought us closer to the state championship,” said Kelsey Flaherty, team captain, as her teammates embraced the welcoming committee of family and friends. (CLICK HERE FOR VIDEO OF THE CAPTAIN)

For visitors to Cold Spring enjoying a balmy day hiking and shopping, it appeared at first as if an emergency had been declared as police moved to stop traffic in all directions at Main St. and Route 9D. Sirens and horns could be heard wailing and blaring at first in the distance and then with increasing volume as they came down the hill. But concern turned to smiles and applause as a parade led by North Highlands Fire Company vehicles passed into the village. The volleyball team’s bus with flags flying came behind the fire trucks followed by a line of private cars filled with people eager to shout the reason for the exuberant demonstration. (CLICK HERE FOR VIDEO OF PARADE)