It’s been around forever, but just what does it do?

It may be an unavoidable trait of life in the 21st-century, aided and abetted by busy lives that permit precious little time devoted to anything beyond day-to-day routines. When we’re not directly involved in an organization, even a local one, people typically know little or nothing about it, or worse yet, harbor misconceptions and misinformation. A prime example may be the Haldane Parent Teachers Association or “PTA.” For the unknowing, the term PTA itself may conjure up images of another PTA, still stuck in 1960’s and “Harper Valley” or a PTA as seen through the eyes of episodes of television programs such as Desperate Housewives or Glee. While local residents can breathe a sigh of relief that the Haldane PTA bears no resemblance to any of those fantastic depictions, misconceptions still persist. The PTA is really mostly a women’s group, right? Wrong. The PTA only deals with elementary and middle school, right? Wrong. PTA is a misnomer, it’s actually a parents’ organization with teachers not really involved, right? Wrong again. 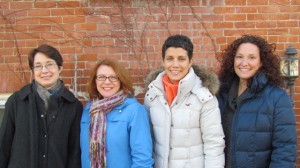 But just what is the Haldane PTA and what does it do? Philipstown.info recently met with four members of its leadership to find the answer to those and other questions. It is an active foursome to say the least. In addition to their daily roles as moms and as PTA Executive Committee members, President Laura Danilov has run two of her own businesses and is a member of the local band, The Lonely; Middle School Vice President Heather Schroder is a literary agent in New York City; High School Vice President Tara Flagler is a full time professor at SUNY Dutchess where she chairs the Exercise Science program; and Corresponding Secretary Elizabeth Edelson is an adjunct faculty member at SUNY Purchase where she teaches Arts Management. Other members of the current executive include Elementary Vice President, Evelyn Carr-White; Treasurer, Sherrie Nachamkin; and Recording Secretary, Kerri-Anne Ferri.

Extensive Participation and a Non-Partisan Mandate

The Haldane PTA has deep roots. It is affiliated with the national PTA, which was formed in 1900 and whose Advisory Council was chaired by Theodore Roosevelt through 1919. The Haldane PTA itself has been around longer than any of the four Executive Committee representatives can remember. It’s mission statement is pretty straightforward, “To support the Haldane school by providing the organizational framework for parental involvement, serving as an outlet for creative community input and offering enriching experiences for our students and their families.” Apparently that mission has struck a chord with the community. In a school that has barely 900 students K-12, the organization currently boasts 477 members. Involvement by Haldane’s teachers and administration is also considerable. “The school is very well represented at our meetings,” Schroder said. Participation often includes one of Haldane’s three principals as well as teacher representatives.

Designated as a 501(c)3 nonprofit, the Haldane group is governed under by-laws emanating from the national and state PTA organizations and modified to meet local needs. The by-laws prohibit PTA involvement in local politics. It does not endorse candidates in local elections – including the school board although it has hosted candidates nights for school board elections. “At [school board] budget time, getting out the vote is a big job,” Danilov said. “We poll our members and if they vote in support of the budget then we support it as an organization.” The PTA played no roll in recently concluded contract negotiations between the school board and Haldane Faculty Association. It did host a public meeting two years ago in response to the Putnam County News and Recorder publishing all Haldane teachers’ salaries. The meeting was in response to the public outcry created by the timing of the release of the salary information; the week before the school board election and budget referendum, which didn’t allow time to respond prior to the vote.

Varied Programs, More on the Way

The Haldane PTA has more than two dozen varied, ongoing initiatives The Giving Tree project, carried out in partnership with The Lions Club, collects Christmas presents for needy students, including those in high school. The Sustainable Garden project goes far beyond gardening and even cooking, providing teaching opportunities in numerous subject areas. “Garden parents” are being added, paralleling the classroom parents program. Another project in the works will enable families to discard outdated pieces of electronic technology – cell phones lap top computers and more; a recycling initiative that will help raise money for other PTA projects. A bit further down the road, the PTA is looking to lend a hand to the Haldane library, improving its collection and other resources.

Recently the PTA has shifted more attention to the high school. “There are class parents in the high school now – one per class. [Principal] Brian Alm meets monthly with them and PTA members to update them and get their opinions,” Flagler said. As students get older and enter high school they become more independent and self reliant. “It’s really important that in the older grades, events are student led” Edelson said. “There’s always been interest in the high school – it’s about finding the ways to do it,” Danilov said.

A recent anti-bullying workshop was held for parents of middle and high school students alike. “It’s an ongoing conversation,” Danilov said, one that will likely expand to include related topics such as cyber bullying. A PTA-led leadership workshop is in the planning stages as well, aimed at helping high school students develop the communication skills they need when approaching potential employers. “Students don’t communicate as well as they used to. It’s a skill that has to be taught,” Flagler said. And In April, a guest speaker will address substance abuse, speaking with students in the afternoon and parents in the evening.

How do residents perceive the PTA overall and Haldane’s in particular? “It’s hard to know what other PTAs are like. Our community, school and PTA are unique. The perception here is more based on participation. It would be interesting to know how people not associated with the PTA perceive it,” Danilov said. Schroder said that, “In a small community where everyone knows everyone, perceptions are based on what we do.” Edelson added, “There is a social aspect, but you don’t come here [to the PTA] for fun. It’s really a roll-up-your-sleeves kind of organization.” What about the perception that moms dominate PTAs, with few dads taking part? “We were recognized by the national PTA, last year, for having 25 percent male membership,” Danilov said. “And it is an active presence,” Schroder added.

Getting the Word Out

The PTA uses a multi-faceted approach to communicate with parents and the community about its work. Email is the workhorse, with blasts going out to members on a regular basis. There’s also a PTA Facebook page and website. ‘We’d love to get more people going to the website and to make it more interactive – with a blog and a forum,” Danilov said. Fliers are sometimes added to student backpacks, but the organization tries to limit its use of paper for environmental reasons. Its monthly meetings are open to the public. “It’s still a work-in-progress but we hope to develop themes for each of those meetings,” Danilov said. She hopes that the themes will add value to the meetings for parents, providing useful information beyond the logistics of school life – with topics ranging from personal wellness to better understanding of the impact of unfunded state mandates. “And there is old fashioned word-of-mouth” Schroder said, a technique that, in a small community where parents talk to each other every day at the school, she feels is still very effective.

Danilov sees communications as a constant challenge. As an example she said that many people still don’t realize that purchases on Amazon.com can be done via the PTA website with the PTA receiving a percentage from each purchase, while the purchaser pays nothing extra. Flagler, while being “pleasantly surprised by the turnout at the high school level,” thinks that getting new people involved is a key. Edelson said a big challenge is figuring out how to best serve the school during a time of big changes in areas such as information technology. “Helping the student body, but also meeting educational goals. How can we best help make that happen?” she’s asked. For Schroder the challenge centers on resources. “ It’s a challenge everywhere – from Montana to Haldane: How to get the best educational resources possible.”

A Community Investment
“There’s great value in having a good school in our community. It affects [everything] even property values. As a caring community, we, and non-parents, have to see educating our children as in investment. If our kids aren’t well educated, who will hire them into the work force? If people don’t see that value it becomes a real challenge for the school,” Danilov said. To learn more about the Haldane PTA CLICK HERE.