The many Philipstowners who have visited Cathy and David Lilburne’s Antipodean Books over the decades the shop has been in residence at Garrison’s Landing have experienced that instantly familiar, crowded, stuffed to the gills secondhand books feeling immediately upon entry. That feeling is nirvana to the many book-hounds out there who love to sniff out an exciting rarity and for whom the hunt is as exciting as the discovery. It has been frustrating, however, to the store-keepers, who have longed for more space to display and stock their increasingly large collection of books, prints, maps and more, largely related to the Hudson region as well as Australia and Antarctica. When the space adjacent to their premises became available recently, the Lilburnes took the plunge and are now the proud proprietors of a new gallery space, which will showcase revolving exhibits relating to their wares, and will also accommodate and display much more of what they have for sale. The new space opened just last week with the first exhibit, titled The River Endures, highlighting prints from their Hudson River collection. 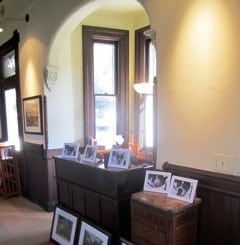 The new room is warm and light-filled, with a 14-foot wood-coffered ceiling with central medallions and large windows with the original wavy glass overlooking that very river which endures. Floor to ceiling bookcases line the walls. The room used to be the old waiting room of the Garrison train station, once sitting across the road, next to the train tracks. David Lilburne sets the history a little: “The railroad came through in the late 1840s, and that’s when this building was started. By the 1890s the railroad barons realized they had something real here, and they pulled this back from the train tracks and made it the library, which a lot of people remember. It used to be Dave White’s store. He was one of the last of the Hudson River fishermen. Underneath this floor there is a concrete floor with rivets so it could be washed out. He would hang his nets outside.” 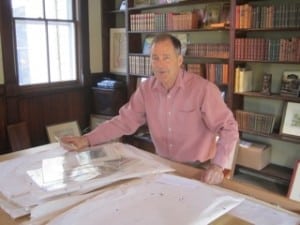 The uniting of the Hudson and Australian specialties may perplex some visitors, but it is easily explained by David and Cathy’s joint backgrounds. The Lilburnes met in London in 1975. David, who grew up in Perth, Australia, was touring Europe after graduating from university with a business degree. He decided to stay on in London and began to work in the maps and prints business. Cathy, who was born in Cortlandt Manor, was a French major, having a semester abroad in Paris. After marrying in December, 1976, they started working together in London. Lilburne describes that period: ”We were doing maps and prints in London, dealing with people like David Attenborough — the real collectors are over there. They’d tell you why and what they wanted, we’d spend summers here [in the Hudson Valley] and then go back to England to sell what we’d found here.” At one point, David and Cathy cut a deal with each other, with David expressing a desire to end up back in Australia, and Cathy agreeing to that with the provision that they live in New York first, “so we moved to America before Australia.  We moved onto the Landing in 1986, and opened Antipodean in 1996.” 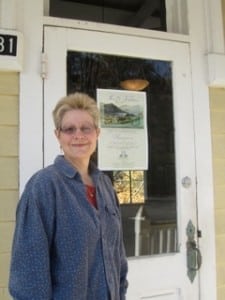 Cathy Lilburne outside the 'new addition'

The Lilburnes brought up three sons, William, Doug and John, in Garrison.  William now lives in Australia, Doug who is moving there soon (the economy is in a bit better shape down under right now), and John is finishing up at SUNY New Paltz. Where they will wind up is still conjecture, but the Lilburnes have loved it here. “I’m a community person,” says David, adding “I couldn’t live in the city even though we could make more money there.” Cathy has been very active in the community, including a long tenure on the Garrison School Board. Philipstown has never failed to fascinate, “Take Philipstown today,” says David, “We have a past governor, the creator of The Lion King on Broadway, the most wonderful mix. You’d meet them all at Guinan’s, and the best part was you couldn’t tell who was the multi-millionaire and who had 50 bucks.” David is looking forward to the anticipated new café/restaurant tenant at the old Guinan’s space, saying “It should be a good symbiosis between our new place and their planned new place.” The Lilburnes say they meet the full spectrum of those coming and going, “We meet people when they first come up to explore the area. We meet them when they sell their homes because the books are usually the first things they want to sell before departing.” 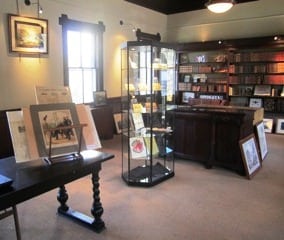 A lot of David’s time is spent traveling to book fairs around the world, including Hong Kong, Boston, and the largest in the world, held nearby in New York City at the Armory.  The Lilburnes are well-known at these fairs for their Hudson River collection. The collection has grown “in little bits and pieces” through the years, and evolved at the beginning partially through trading with other locals involved in the same area: “Edie Belcher had a print shop here.  We’d trade prints.  I did the same with Richard Saunders [of Hudson Rogue] — we still do.”

The vast majority of their business is online, with only a small percentage resulting from walk-in traffic, although they do see a cross-section of the community and tourists with regularity, and are used to giving directions, recommending places to eat and advising on hiking, acting as a sort of mini tourism office at times. The Lilburnes are hoping that the new space, and their newfound ability to display much more of their collection, will alter the online/in person percentage. Lilburne says he frequently hears the refrain from happenstance visitors “Oh, wow, this is fantastic, I’ll be back when I have more time” as they are confronted with the enticing clutter of the original space. He is hoping that the streamlined, browsing-friendly nature of the new room will encourage visitors to stay a while and get a later train back. 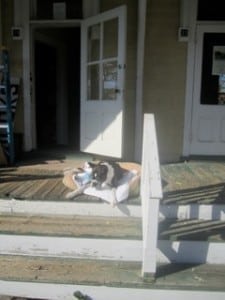 The new space holds a wide range of books, prints, postcards, maps stereoscopes and more. Inexpensive postcards share the space with valuable prints, with items suitable for any budget. The space is designed not just for the selling of goods, but also to educate and encourage an awareness of the history of the river. On display right now is the first map of the area, British, from 1792, showing A Plan of Fort Montgomery. Drawers full of prints are divided into categories including Newburgh, Peekskill, and Lower Hudson. Cathy Lilburne notes, “We were fortunate enough to purchase a large local collection during the summer, and this will form the nucleus of the exhibition.”

The new space will be open during regular business hours, Monday through Friday 9:30 a.m. to 5 p.m., Saturday and Sunday 1 to 5 p.m. with David Lilburne planning to be there every weekend, saying “The trick is to be open. We never had to be open on weekends before — now we do.” Helping mind the shop is Winston, the Lilburne’s 11-year-old dog, amongst the more celebrated of Garrison’s Landing’s denizens. More details at their website or 845-424-3867.
Photos by A.Rooney