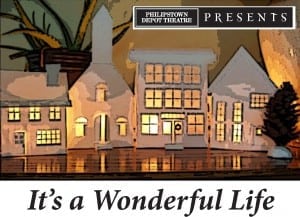 The first thing that Carl Graham Howell, the director of the Depot Youth Theatre’sproduction of It’s a Wonderful Life wants to make clear is that he is that strange person who has made it to adulthood without ever having seen the movie. How can this be so?  “I was just more into Bruce Springsteen than Jimmy Stewart,” he replies. The lack of familiarity with the beloved Christmas perennial is actually a positive in terms of guiding this group of 24 kids to their own vision of the play, and not simply recreating or otherwise parroting the film. “I keep telling the kids that it’s their play, not the movie and that the theme of ‘their play’ is that they need each other.” 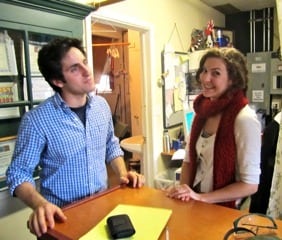 It’s a Wonderful Life began its own wonderful life as a short story entitled The Greatest Gift, written by Philip Van Doren Stern, before being transformed into the Frank Capra film.  This play, in turn, was adapted for the stage by James W. Rodgers, and is based on the film. The cast ranges in age from 4th to 8th grades, and they have easily transformed themselves into the citizens of Bedford Falls as they parade through the troubled memories of the main protagonist, George Bailey. With a Scrooge-like villain, a guardian angel who helps rectify things and an assortment of the oddball characters and tightly-knit families you get in a town maybe sort of like this one; It’s a Wonderful Life resonates deeply for a community theater. The kids certainly think so, with one of them, John Liam Eng-Wong saying “it kind of resembles the movie; it has the same overall feeling, the same characters, but it’s not exactly the same — I really like it.”

Howell and assistant director Rachel Ritacco began working with the cast back in September, meeting once a week to start, and twice weekly more recently. On the Monday before Friday’s opening they were relatively calm and excited about the show.  Howell, who as an actor and musician performed in last spring’s World’s End Theatre production of The Seagull, assumed directorial duties after commenting to someone at the Depot that “I’d love to do something like that [direct a children’s show] sometime.”  The sometime arrived rather faster than imagined when an opening for a director occurred. Howell had acted in children’s theater and performed his music for an audience of kids, but this is his first go-round as director. It is similar for Ritacco, a Philipstown native (now moved away) whom Philipstown.info profiled last year when she was an apprentice for the Hudson Valley Shakespeare Festival  LINK.  She has since graduated from SUNY New Paltz with a theater degree and is about to fully immerse herself in the world of a starving (let’s hope not) actor in New York City. 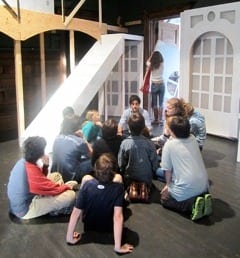 The cast gathers round the intrepid director as the set is laid in.

The cast is filled with a lot of newcomers to Depot Youth productions, along with their more experienced peers. Howell is inspired by this, saying “It’s hard, but the exciting thing is a lot of them haven’t been in a show before, and almost as a result of that they have so many ideas.  Ritacco concurs, “They don’t necessarily have previous experience, but they have so much enthusiasm.  I thought that with so many of them in middle school they wouldn’t be very open to things but I was completely wrong — they are very gung ho.” Howell adds, “A lot of our job is saying yes and no to their ideas. What I’ve discovered is that kids like to be directed. The like to have an outside eye tell them what is going on. And while they might be self conscious at times they don’t put up artifice.”  Ritacco has been surprised at “how well they can work off each other. In fact we had tried to stage something and we were at a standstill. Carl posed the question to the cast asking if they had any ideas. One girl took charge; she came up with the whole thing, and we’re keeping it. Everyone respected it and took her leadership well.”

That girl, Natalie Lansbury, is in just her second Depot show, and she loves it: “I’m planning on doing a lot more.” She recalls her assist, “It was the beginning entrance, and the directors weren’t sure what to do. Everyone is looking for George. I suggested they all be looking for him in slow motion. They asked me to show them. I broke everyone into groups and got props. One group goes into the audience.” Lansbury is portraying Clarence, the angel, “It’s a fun character.” Asked what she would do if she possessed Clarence’s powers, Lansbury wasn’t certain, but said, “I’d do anything that’s happy.”

The directors are working hard to create a comfortable atmosphere while still moving the production towards audience readiness. At the start of the Monday afternoon run-through the kids were peppering their director with questions and comments as he corralled about 17 of them with a pep talk to begin the proceedings. The unscripted dialogue ran as follows:

CGH: “We’re doing the whole thing to see where we are.  We won’t stop.”

Actor: “What about my sideburns?”

CGH: “Keep them, your hair looks good.  So for today, let’s pantomime and mimic.”

CGH: “Anyone remember how the play starts?” 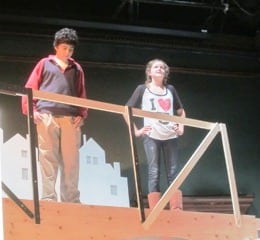 The kids are appreciative, giving a positive critical appraisal, with Justin Rothman saying, “I think the directors are very nice and have a great way of making the play a success.” Julie Geller added, “They’re really nice, not really mean or strict.” As for the theme of It’s a Wonderful Life, wherein George Bailey comes to realize the value of his own life by seeing what his small world would have been like had he not been born into it, Ritacco says that it is unaltered in this production, “I think my mind has been opened.  I wasn’t sure kids could understand it and they do, very well.”